Media Technology Monitor (MTM) has released a series of reports on how Canadians are using media and technology from coast to coast, highlighting the similarities and differences across regions, provinces and major cities. Among the findings across 11 markets, Albertans are more likely to have internet-connected devices. Half of them own an iPhone and 66% of Alberta residents own a tablet, which is more than the general Anglophone population; Over-the-Top-TV (OTT) services like Netflix, are more popular in Alberta (72%) and British Columbia (70%). Francophones who live in Montreal are also more likely than the general Francophone population to subscribe to OTTs; Francophones who live in Quebec City are more likely than the general Francophone population to listen to online audio services and show more interest in listening to audio content on YouTube (60%); and Torontonians (69%) and residents of Quebec City (62%) are more likely to watch Canadian TV news channels. Netflix Q4 results show the streaming giant added 125,000 more Canadian subscribers and 8.76 million globally in the quarter ended Dec. 31. The streaming giant’s growth, particularly in North America, has slowed with the arrival of new entrants like Disney+. The company also noted that it has changed how it counts viewership, moving from a system that counted a view as 70% of a show or film. Netflix will now consider a view to be any account viewing at least two minutes of a series or a film. 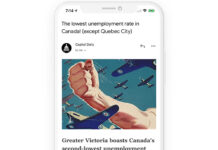