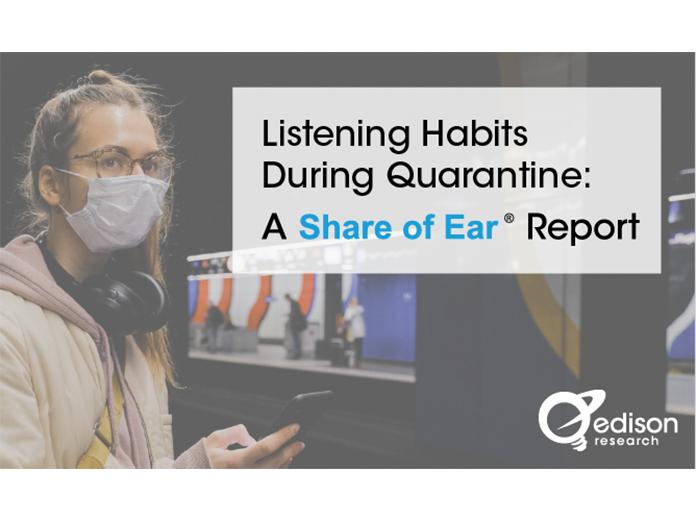 The absence of a commute, work disruptions, and other COVID-19 realities have contributed to changes in how and when people are listening to audio.

Edison Research has shared the latest findings from its Podcast Consumer Tracker and ongoing Share of Ear study, the only single-source measure of all things audio in the U.S. that tracks consumer listening in 15 minute increments, both online and off.

Podcast Consumer Tracker found that among weekly podcast listeners, four in 10, experienced work disruption with 9% eliminated from their jobs entirely, while another 32% saw their work hours reduced or postponed. 35% saw no change.

Edison Senior Vice-President Tom Webster says early on in the pandemic, that initially resulted in podcast listening time falling by about an hour per week, due in part to the loss of the commute.

“We had children to manage, we had additional work from home responsibilities…and that affected all kinds of listening, but by the end of the quarter things had normalized and as far as podcasting is concerned changed for the better,” said Webster, noting that by the end of the second quarter, average weekly podcast listening was up from pre-COVID by a full half hour a week to 6 hours, 45 minutes. 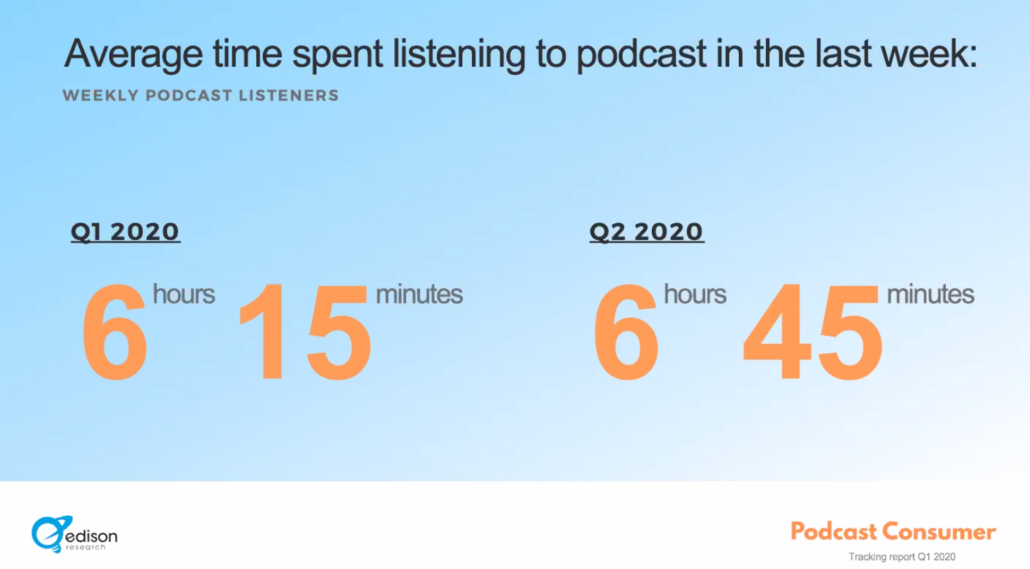 Back in 2014 when Edison first began its Share of Ear study, AM/FM radio represented 51% of the time spent listening to audio, followed by owned music (18%) and streamed audio (11%). Podcasting represented just two per cent of all time spent listening to audio – roughly 1/25th that of radio. Six years later, the latest numbers show AM/FM radio now represents 42% of all audio consumed by Americans, followed by streaming (17%). Podcasts represent five per cent of all listening, but have jumped to 1/8th of radio’s Share of Ear. 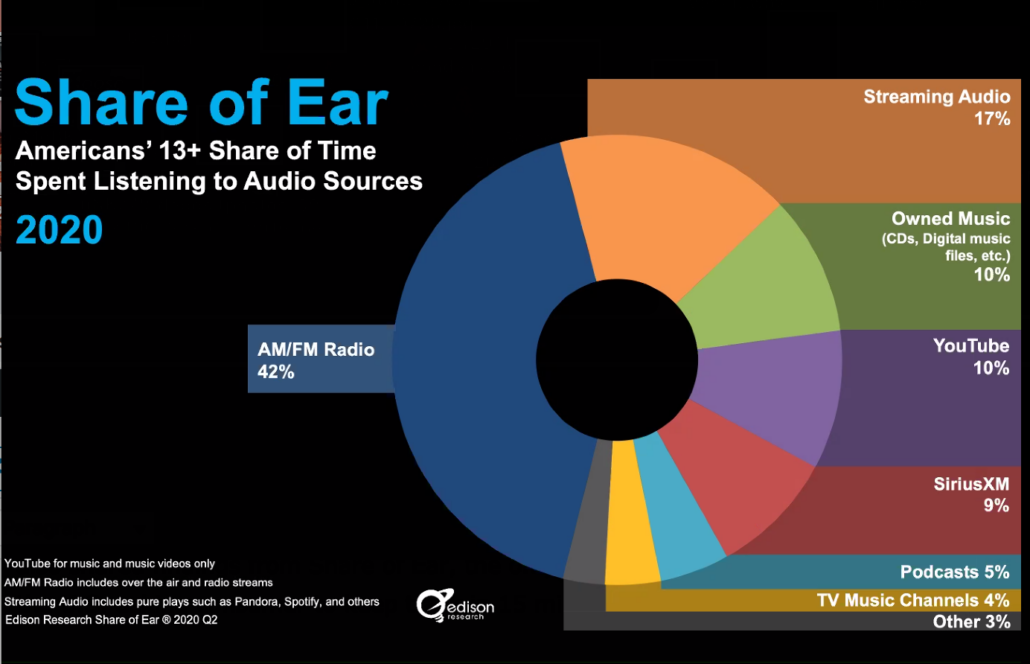 “Removal of the commute has had an impact on all of these habits and podcasting has benefitted,” said Webster. “For the first time [during the COVID disruption], we listen to more content from digital devices than analog devices. That’s the first time we’ve been able to report that.” 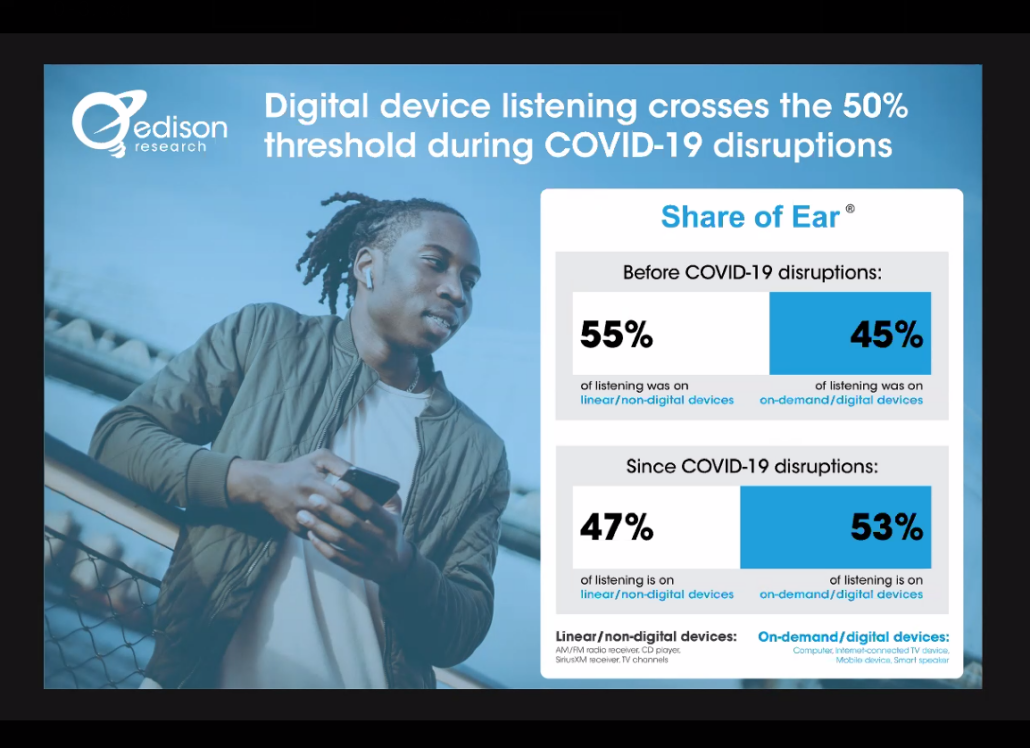 Audio listening has also shifted to later in the day. Prior to the pandemic, 50% of Americans reported listening to audio by 7:15 a.m. That’s now shifted forward to 8:30 a.m.

“That’s 75 minutes later that we’re starting our audio day,” said Webster. “That doesn’t necessarily mean we’re sleeping later…but it means we’re looking for something different…that was a job to be done by AM/FM radio, that’s a job that doesn’t need doing anymore. Traffic isn’t something we’re looking for…and weather has also disappeared as well…so some of those jobs to be done by the various media that we consume in the morning, it’s that they’re not shifted later but we don’t need them at all. We’re starting our audio days later and what we’re looking for from audio media has changed. All forms of audio need to be responsive to that.” 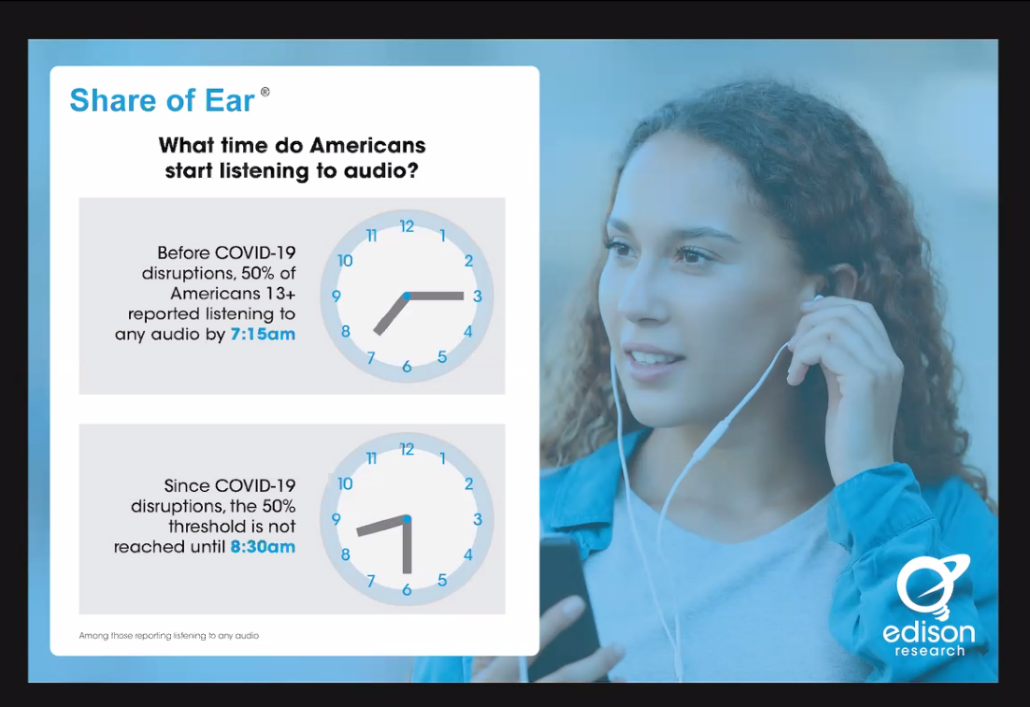 Webster said with Google and many other large companies not inviting their employees back to work until next year, these listening trends shouldn’t be viewed as ephemeral.

“They could be around for awhile,” said Webster.