Valérie Héroux will join the Stingray management team as Vice-President, Content Acquisition and Programming, effective Nov. 11. Based in Montreal, Héroux will report to Mathieu Péloquin, SVP Marketing and Content, and oversee Stingray’s content and programming team as well as publishing and label relations. Héroux steps into the role from Vidéotron, where she’s been Senior Director of Content and Strategic Partnerships for the last decade, leading strategic negotiations as well as CRTC commercial arbitrage. Read more here.

Jamie Haggarty will broaden his previous role at Deluxe as President, Post Production, and assume the role of President, Deluxe Creative Services, overseeing the company’s newly combined VFX and post-production teams. Deluxe Creative Services will bring together over 3,700 artists, editors and experts across Method Studios in Los Angeles, Montreal and Melbourne, along with Deluxe Post Production companies EFILM, Encore, Stereo D, Level 3, and Editpool, and combined operations in Atlanta, Barcelona, London, Madrid, New York, Pune, Toronto, and Vancouver. The company says the alignment will allow Deluxe’s creative teams, with similar customers and workflows, to work more collaboratively, streamline operations and enhance services. Prior to joining Deluxe in June, Haggarty served as President & CEO of Sim International. He’s also held EVP and VP roles at Rogers and Corus Entertainment. Haggarty will continue to be based out of Los Angeles and report to John Wallace, CEO of Deluxe.

Luc Perreault has retired after 31 years with the The Weather Network and MétéoMédia. Perreault, who most recently held the role of vice-president of distribution and government relations, had been with the network since its launch in 1988 and was part of the transition team when the channels were acquired by Pelmorex in 1992.

Dave Tomlinson is making a return to TSN Radio after getting caught up in layoffs at the network in March. Tomlinson and Jon Abbott will be the TSN Radio broadcast crew for the 2020 World Junior Hockey Championships, live from the Czech Republic. They’ll also be hosting their own weekly hockey show on TSN 1040 (CKST-AM) Vancouver. Tomlinson will also pop up on Vancouver Canucks pre- and post-game coverage throughout the NHL season.

Luisa Alvarez has joined CTV Vancouver as a multi-skilled journalist. Alvarez arrives from CHEK News in Victoria where she’s been a videojournalist for the past two years.

Krista Sharpe has joined the CTV Kitchener newsroom. Sharpe transfers from CTV Barrie where she’s been a videographer since Sept. 2017. Prior to joining CTV, she worked with Global News Regina and Cogeco Media in Halton, ON.

Laurie Few will join Canada’s National Observer in Toronto as its new Managing Editor. Most recently part of the senior management team at CPAC as Director of Digital and Creative Content, Few is also a former executive producer of Global News’ investigative program 16×9. She also spent 19 years at CTV, including nine as a producer with W5. Carl Meyer, who has been serving as interim Managing Editor for Canada’s National Observer will step into a new role as Ottawa Bureau Chief.

Michael Donovan has resigned from the board of directors of DHX Media Ltd. (now WildBrain). Donovan, the Halifax-based company’s founder, resigned as CEO in August. Donovan is also co-founder of Salter Street Films which was later acquired by Alliance Atlantis. 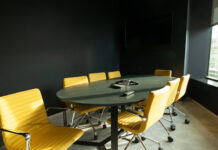