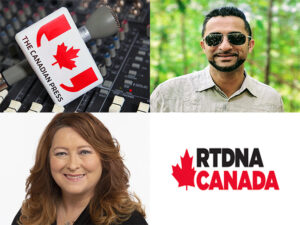 RTDNA Canada has announced another round of honourees that includes CTV Winnipeg news director Karen Mitchell, Dejero co-founder Praveen Gupta, and The Canadian Press (CP). CP is the 2022 recipient of RTDNA Canada’s President’s Award, the highest honour bestowed by the association to acknowledge individuals and organizations who have brought recognition and distinction to electronic and digital journalism in Canada. Gupta is receiving the Bill Hutton Award of Excellence, named for RTDNA Canada’s first president and given to individuals or organizations who have shown a true commitment to RTDNA and the betterment of journalism in Canada. Mitchell is being recognized with RTDNA Canada’s Distinguished Service Award, honouring a member who has played a major role in the continuing success of RTDNA Canada. Read more here. 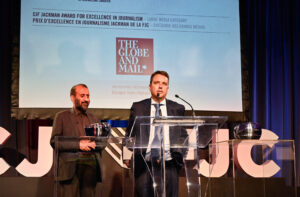 The Globe and Mail is this year’s winner of the CJF Jackman Award for Excellence in Journalism in the large-media category, announced at the annual Canadian Journalism Foundation Awards. The CJF honoured the Globe for “Escape from Afghanistan,” a story documenting journalist Mark MacKinnon’s work on efforts to evacuate Afghan nationals following the fall of Afghanistan. In the small-media category, IndigiNews won for its reporting on the B.C. government’s controversial practice of birth alerts. This year’s William Southam Journalism Fellowships recipients include: Natasha Grzincic, deputy editor at VICE News; Hannah Hoag, the deputy editor as well as the energy and environment editor at The Conversation Canada; Elizabeth Wanja Gathu, a Kenyan journalist with more than 15 years of multimedia experience working with both local and international media; Omayra Issa, a senior reporter for CBC News; and Valérie Ouellet, CBC senior data journalist. RNAO (Registered Nurses’ Association of Ontario) is handing out seven Media Awards to journalists who wrote for or produced stories for the Toronto Star, Global News, CBC Radio, toronto.com and The Voice of Pelham. Entries were judged by a panel of nurses and journalists. Awards will be handed out at RNAO’s virtual 97th Annual General Meeting on June 10.

The CRTC has published new data that indicates Canadians are using mobile wireless services more than ever while the price of service plans continues to decrease year-over-year. The CRTC report, published as part of a quarterly update to its Communications Market Reports, also shows that as of the end of 2020, Canada’s mobile wireless networks provide mobile coverage to 99.7% of Canadians, including 98.9% of Canadians living in Northern Canada and 98.5% of rural Canadians.

The CRTC is inviting comments on how telecommunications services in the Far North can be improved, including the Northwest Territories, Nunavut and Yukon, and communities in northern B.C., and Fort Fitzgerald, AB. During the first phase of the consultation, northern residents told the commission that everyone living in Canada should have affordable access to telecommunications services that allow for the same online activities as those available in the South, like video conferencing. The comments and data collected through public opinion research allowed the CRTC to narrow the scope of issues it should address in the next phase. In the second phase of the consultation, the CRTC is seeking information on what actions it should take to make home phone and internet services in the Far North more affordable, reliable, and competitive. The CRTC is welcoming comments until Oct. 6. The commission will hold an in-person hearing on April 17th, 2023 in Whitehorse. Stingray’s Q4 highlights include organic growth of 12.7% year-over-year in Broadcast and Recurring Commercial Music Revenues. Revenues increased 21.6% to $72.6 million from $59.7 million. The increase was primarily due to the acquisition of InStore Audio Network, gradual easing of COVID-19 restrictions and the return to normal commercial operations, as well as an increase in equipment and installation sales related to digital signage. Revenues in Canada improved $5.0 million, or 13.7%, to $40.5 million from $35.5 million in the same period in 2021. Revenues in the U.S. surged $8.7 million, or 84.7%, to $19.1 million from $10.4 million a year ago. Revenues in other countries declined $0.8 million, or 5.3%, to $13.0 million from $13.8 million in Q4, mostly due to negative foreign exchange rates.