RTDNA Canada has unveiled more of its 2022 honourees ahead of its Gala Awards Dinner on June 11 in Toronto.

This year’s RTDNA Canada Hall of Fame inductees are Vision TV founder and former APTN news director Rita Shelton Deverell and the late Gary Maavara, a former Canwest Global and Corus Entertainment executive, who passed away in May 2021 at the age of 68. The Hall of Fame Award recognizes individuals who have made outstanding contributions to the fields of audio, digital and video journalism.

Deverell began her broadcasting career in the early 1970s as a producer of children’s programming at CBC, going on to work as producer and host of CBC Access.

In 1983, she joined the University of Regina’s School of Journalism. Deverell left in 1988 to become one of the founders of multi-faith and multicultural broadcaster, Vision TV. From 2002 to 2005, she served as Director of News and Current Affairs at APTN.

Committed to diversity and helping advance the careers of those from racialized communities, Deverell was inducted into the Canadian Association of Broadcasters (CAB) Broadcast Hall of Fame in 2002. In 2005, she was appointed a Member of the Order of Canada, and in 2022 was the recipient of a Governor General’s Performing Arts Award for Lifetime Artist Achievement in broadcasting and film. Deverell currently serves as chancellor of Lakehead University, and serves on the boards of CBC/SRC and the Royal Ontario Museum.

Maavara was a graduate of Boston University and the Osgoode Hall Law School at York University. He was called to the Bar in Ontario in 1983 and started his career as a lawyer, but soon found his way into broadcasting at CTV where he worked for a decade. He touched every part of the business including executive producing, overseeing production of Olympic Games, Chief of Engineering, VP of Sports, and Chief Legal Counsel. He won many awards for his work, including an Emmy for Olympic Games coverage.

Maavara was eventually recruited by CanWest Global where he spent the next six years in a variety of executive and operating roles, including Director of Special Projects at Global TV, Chief Operating Officer – Interactive, and Senior Vice-President, Specialty Television. In 2004, he became Executive VP and General Counsel for Corus Entertainment.

Among other boards, Maavara served as a director of the Canadian Association of Broadcasters, Canadian Broadcast Museum Foundation, and the Banff World Media Festival.

Maavara stepped down as General Counsel of Corus in 2017, but remained an officer of the company until October 2019. Over the last 10 years of his career, he consulted until his retirement in 2019. He passed away on May 24, 2021, after five years of living with cancer.

Veteran CTV News correspondents Tom Walters and Avis Favaro are this year’s national Lifetime Achievement Award honourees. One of the highest honours bestowed by RTDNA Canada, the award recognizes outstanding service and continued excellence during the course of a career in journalism and news broadcasting.

As CTV’s Los Angeles Bureau Chief, Walters has reported on everything from California wildfires to the Oscar red carpet. He has covered four American Presidential elections, the migrant crisis on the U.S./Mexico border, the mass shootings in Las Vegas and New Zealand, protests over police conduct in Ferguson, MO., and an ISIS attack in Istanbul. He has covered Summer and Winter Olympic Games, two space shuttle launches, more than a dozen hurricanes in the U.S. and Mexico, Typhoon Haiyan in the Philippines, and devastating earthquakes in Haiti and Japan.

Since the mid-1990s, he has served in a number of senior positions, on and off-camera, including five years as News Director at CTV Vancouver. Prior to that, he was a national correspondent in Toronto and Atlantic Bureau Chief in Halifax. He’s also done a stint as a producer and reporter for W5. 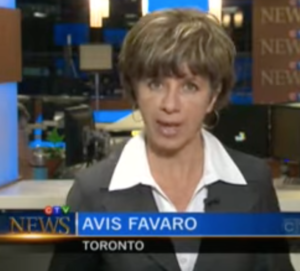 The country’s longest-serving television health correspondent, Favaro began as a news writer at Global TV in 1982, under the tutelage of veteran journalist Peter Trueman. After moving into general news and business reporting, a feature story on a novel brain cancer therapy sparked her interest in health journalism. She was recruited by CTV News in 1992 and has since reported on a vast array of health issues, from new treatments for once untreatable diseases, to shortages of essential medications, medical errors, infectious diseases, and more recently, medically-assisted death.

Favaro holds an honourary PhD from McMaster University where this fall, she’ll serve as the first Journalist in Residence at the Faculty of Science. Earlier this year, she announced she was leaving journalism full-time to begin a new chapter as a freelance health journalist.