Canadian Music Week’s RadioActive 2022 returned in-person in Toronto on Tuesday for the first time since 2019. Radio futurologist James Cridland opened with a keynote filled with examples of future-leaning radio from around the world, as a smaller-than-usual but enthusiastic group of radio broadcasters and podcasters settled into a very long day of in-person learning. In one of the most poignant sessions of the day, moderator Saroja Coelho of CBC Music led a discussion on inclusion. Flow 98.7 General Manager Gary Gunter described the challenges and opportunities of managing the station through a post-ownership transition period (to another minority owner), as well as subsequent adoption of the Flow brand. Sharon Hinds also provided insight into Rogers Sports & Media’s All-In program and shone a light on the importance of mentorship and retention of minority employees. Read more here.

Virgin Radio network personality Shannon Burns is this year’s winner of the Allan Waters Young Broadcaster of the Year Award, in memory of Steve Young, honouring Canada’s best young broadcaster under the age of 30. Burns has been with Bell Media since 2015, starting as a weekend and evening announcer with 104.9 Virgin Radio (CFMG-FM) Edmonton, working her way up to middays, and then moving to evenings on CHUM 104.5 (CHUM-FM) Toronto, while also hosting iHeartRadio Nights. She transitioned to middays on 99.9 Virgin Radio (CKFM-FM) Toronto last August (also heard in Kitchener-Waterloo, London, Windsor, Halifax, Winnipeg, Edmonton, Kelowna and Victoria). Burns is also the host of pop culture podcast, Pop For Thought, and a successful TikTok creator, boasting almost 650,000 followers and nearly 27 million likes. Read more here. 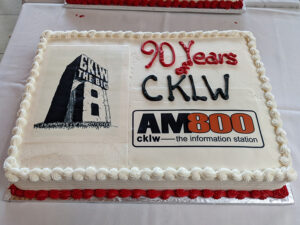 AM800 CKLW Windsor celebrated the station’s 90th anniversary this week. CKLW first launched on June 2, 1932 as CKOK. The station adopted the CKLW call letters when Essex Broadcasters, a group of Windsor-area business owners, merged with the London Free Press and its station CJGC (now CFPL) London. The “LW” in CKLW stood for London-Windsor. Serving Southwestern Ontario and Metro Detroit, the station has gone through many formats, ownership and branding changes over the year. In 1967, CKLW entered its heyday, transformed into “The Big 8” with the adoption of the “Boss Radio” format that had rocketed stations like KHJ Los Angeles to the top of the ratings. Influential music director Rosalie Trombley famously guided the station’s playlist during the Big 8 years, credited with breaking numerous acts into the Top 40 CHR charts because of CKLW’s vast reach. When Canadian Content regulations came into effect in the early ’70s, the 30% CanCon rule and the rise of FM in the U.S. started to erode the station’s ratings, and The Big 8 branding was abandoned in 1985. The station transitioned to news/talk in the early ’90s. Bell Media has owned the station since 2010. Last week, CKLW marked its milestone anniversary by playing old liners and newscasts, and inviting some former DJs and hosts on-air, including former Big 8 jock and retired AM800 CKWW Program Director Charlie O’Brien, former CKLW talk show host Wayne Stevens, and former Big 8 morning show host Dick Purtan. Read more here. 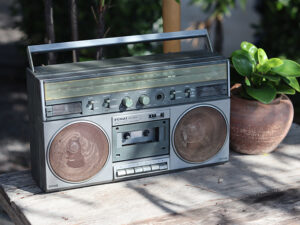 Orbyt Media has launched new country music program, New & Now With Shannon Ella, airing weekly on Sundays at 4 p.m. local time on Bell Media’s Pure Country stations. Led by Shannon Ella, the host of middays across the Pure Country network, the show highlights the newest and hottest artists in country music, featuring interviews with musicians on the rise, stories behind chart-topping songs, and new music. The show is available to all radio broadcasters via Orbyt Media. The Canadian Broadcast Standards Council (CBSC) has released its decision concerning the broadcast of English songs containing the f-word on French-language radio. The CBSC concluded that, because the overall programming was French, only songs that contained numerous instances of the word or used it as an insult towards a person are in breach of the Canadian Association of Broadcasters’ (CAB) Code of Ethics if aired during the day. The CBSC has, in previous decisions, established that in English Canada the broadcast of the f-word and its variations must be limited to late evening broadcasts. The CBSC received a complaint from an anglophone listener of French station VIBE 100.9 (CHXX-FM) Quebec City asking what the CBSC’s position was on English-language songs broadcast on francophone stations. The CBSC’s French-Language Panel concluded that one of the three English songs examined violated the code because it contained many instances of the expletive directed at individuals. All adjudicators agreed that, even if the occasional f-word is acceptable during daytime hours on French stations, “broadcasters should always strive to offer high quality content and consider availing themselves of edited versions of the songs, which are usually readily available.” 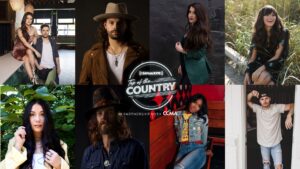 SiriusXM Canada has opened voting for the fourth annual SiriusXM Top of the Country competition, in partnership with the Canadian Country Music Association (CCMA). The public will decide which of the eight semi-finalists will make it to the final three, to perform at some of Canada’s biggest country music events, embark on a SOCAN songwriting trip, and compete for the grand prize of $25,000. The semi-finalists are: Danielle Ryan (Pitt Meadows, BC), Devin Cooper (Innisfail, AB), Five Roses (Montreal, QC), Josh Ross (Waterdown, ON), Kyle McKearney (Calgary, AB), Mallory Johnson (Conception Bay South, NL), Shantaia (Spiritwood, SK), and SACHA (Warkworth, ON).

LISTEN: It’s been just over a year since Kelowna’s 103.9 The Lake (CKOV-FM) was launched. Helmed by former Clear Sky Radio President Paul Larsen, the station – under its former ownership was branded as Soft 103.9 – and was one of the early casualties of the pandemic. Now, with a year of operation under its belt, we talk to Larsen about the ups and downs of being a stand-alone owner in a highly-competitive small market, honouring Kelowna’s radio history, and more.

LISTEN: On the latest Sound Off Podcast, Matt Cundill welcomes Adrian Harewood, who is stepping away from CBC News Ottawa at 6 to focus on teaching journalism at Carleton University. In this episode, Cundill and Harewood reflect on their time in elementary school together and talk about Harewood’s recent appearance on Canadaland where he discussed systemic racism in media and at the public broadcaster. Listen on your favourite podcast app or here: