CBC Podcasts’ new limited-run series will explore the Toronto hip-hop scene through the lens of the city’s favourite son, Drake. 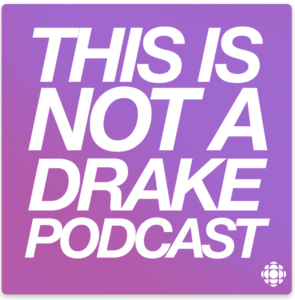 Debuting June 3, THIS IS NOT A DRAKE PODCAST will look at the history and evolution of hip-hop, R&B and Black culture in five parts. It will be hosted and co-produced by Ty Harper, a radio producer and documentarian who has been covering Toronto’s hip-hop and R&B scenes for well over a decade. Harper was the co-host and creator of O.T.A. Live!, which aired on FLOW 93.5 FM (CFXJ-FM) Toronto from 2005-11 and established itself as the destination for weekly interviews with those in Toronto’s under-represented hip-hop scene. He later co-founded Toronto-centric music blog cityonmyback.com and is currently a producer on CBC Radio’s q with Tom Power.

“Drake is really the culmination of many moments, artists, songs – some heard and so many more unheard – who are all responsible for making hip-hop and Black music the dominant cultural force it is right now,” explained Harper, in a release. “It’s amazing to be able to tell this story with the depth and nuance it deserves.”

THIS IS NOT A DRAKE PODCAST promises to dive into hip-hop’s journey to the mainstream and how that influenced Drake, his musical roots and his transition from acting on teen series Degrassi to music stardom. It will also delve into the gender dynamics of hip-hop and the rise of the “Nice Guy” rapper in a special episode hosted by co-producer Anupa Mistry, an arts and culture journalist and producer, who has worked at Vevo and The Fader, and had bylines at VOGUE and Pitchfork, among other publications.

Music journalist Del Cowie, who worked as a writer, associate producer & researcher on Banger Films-produced Netflix series Hip-Hop Evolution, is also co-producing. Among Cowie’s credits, he was an assistant editor at Exclaim! magazine for 14 years where he wrote about music and pop culture.

Josh Bloch, a former producer on CBC Radio’s The Current, who hosted and co-produced CBC Podcasts’ acclaimed Uncover: Escaping NXIVM, will act as showrunner. Bloch has a forthcoming podcast series entitled The Lost Kids about the “troubled teen” industry which is set to be released by NBC later this year.

“I came of age in multicultural Toronto, surrounded by the sounds of many of the artists appearing in the series. Ty and the podcast team have pulled back the curtain to show how Drake was the result of a cultural and musical seismic shift. The series is a smart, immersive journey about the music we love today,” said Arif Noorani, Executive Producer, CBC Podcasts.

New episodes of THIS IS NOT A DRAKE PODCAST will drop weekly.