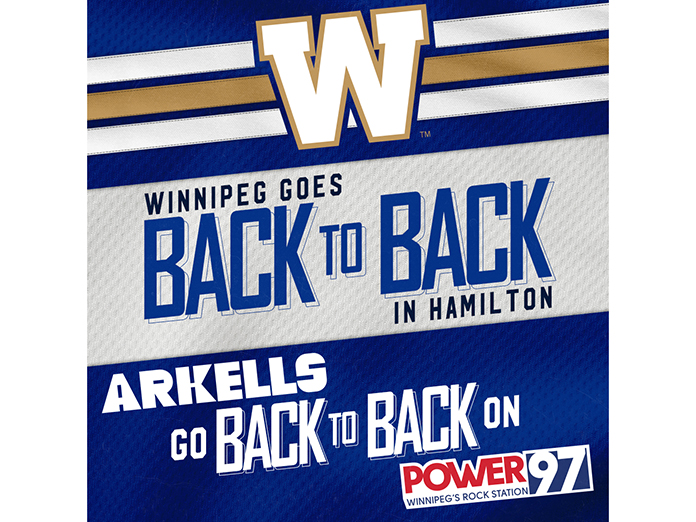 Winnipeg radio station Power 97 (CJKR-FM) is claiming the Arkells as the Winnipeg Blue Bombers’ good luck charm in Sunday’s Grey Cup, embarking on a marathon of the Canadian band’s tunes which will play back-to-back through Wednesday afternoon.

Arkells, who were formed in Hamilton in 2006, led Sunday’s Grey Cup halftime show in their hometown, accompanied by special guests The Lumineers, K. Flay, and Northern Soul Horns. The Bombers went on to defeat the Hamilton Tiger-Cats 33-25 in overtime.

“We love Arkells! We were pumped when they were asked to play the Grey Cup Halftime show and their performance clearly brought the Blue Bombers good luck,” said David Drake, Power 97 Program Manager, in an email to Broadcast Dialogue. “Since they motivated Winnipeg to win back-to-back championships we needed to repay Arkells for bringing us good fortune, so we decided we should play them back-to-back on Power 97 for a few days. They won’t be getting a key to the city just yet, but I don’t think I’m out of line when I say they’re Winnipeg’s band now. Sorry Hamilton.”

Power 97 started its back-to-back Arkells marathon at 2 p.m. Monday, Dec. 12. It will wrap up at 6 p.m. on Wednesday, Dec. 15 when the Bombers’ Grey Cup Celebration gets underway at IG Field. COVID-19 regulations will prevent the team from holding a parade this year.