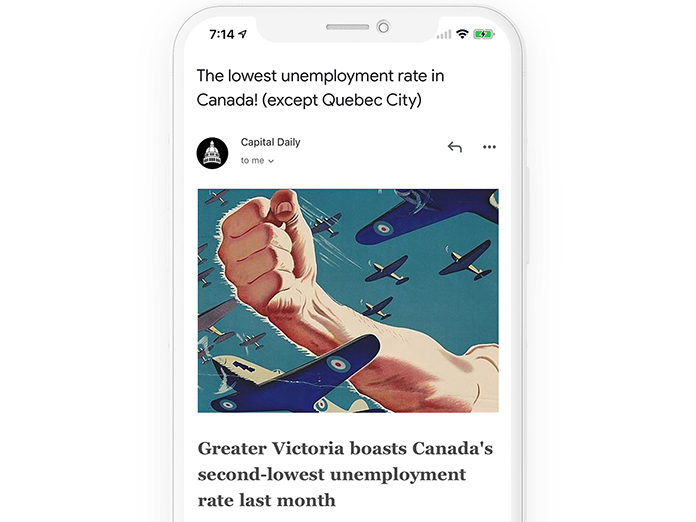 It’s rare in the current media climate that an editor is told by a publisher to take the long road to revenue, but that’s exactly where Tristin Hopper has found himself.

Since June, the former National Post scribe has been at the helm of The Capital, Victoria, BC’s newest digital news outlet, specializing in long-form investigative journalism.

It published its first daily newsletter, Capital Daily, on Sept. 14, 2019, which is sent out by controlled email circulation. It’s also publishing an average of two to three feature stories a week – all paywall-free.

That patient capital comes by way of Victoria area tech entrepreneur Andrew Wilkinson, not to be confused with the BC Liberal party leader of the same name.

Wilkinson, the chair of WeCommerce and Dribbble (who did not respond to an interview request), was an undergrad in the Journalism program at Ryerson for one year before venturing into the tech world. According to Hopper, Wilkinson recognized a gap in the amount of local media coverage dedicated to investigative news.

“Everyone in Victoria has seen this,” said Hopper, who prior to studying journalism at both Carleton University and Concordia, graduated from high school in the picturesque local suburb of Oak Bay. “We know how much news is happening here, we see how little of it makes the media, and Andrew felt the city could really benefit from a long-form investigative news organization. He called me and said ‘I’m thinking of starting up a news organization, I’ll give you three years of solid funding and then we’ll get it on a path to sustainability.'”

The Capital has started modestly. Hopper works out of his basement, while new hire Sean Craig, who was most recently with the National Observer, mainly works out of cafes. Investigative reporter Tori Marlan is based in Seattle for the time being, while other contributors are freelance.

“We’re keeping overhead as low as we can. We beg and scrimp where we can. That’s part of sustainability,” explained Hopper, who took a few mental notes during his more than eight years with Postmedia. “I studied what happens to news startups and the National Post did this…they started and spent gobs of money as if there was no tomorrow and then spent 15 years paying off the debt from that.”

While ads are being sold within The Capital newsletter, the main website remains ad free. Hopper believes eventually the most viable option for monetization will be the sponsorship route, similar to The Guardian model.

Hopper is optimistic that if the community finds value in what The Capital is doing, they’ll continue to support the publication. He says that’s already been evidenced by reaction to its coverage of the National Centre for Truth & Reconciliation’s release of a comprehensive list of children who died at Indian Residential Schools. The Capital published a feature focused on the names and schools on Vancouver Island, drawing huge response.

“I don’t think a lot of people knew that some of BC’s most notorious schools were just an hour or two drive from Victoria. I also knew from growing up in Victoria, there are a fair number of people that had stories, but nowhere to go with them…so people are presenting those to us now. If we can create evergreen content and The Capital has the best explanation, the best take on the issue or something that no one else has, we can get that reader support,” said Hopper.

Hopper says the Greater Victoria market, which encompasses a population of approximately 367,000, is special in that it has a combination of readers hungry for deep dive journalism.

“We’ve noticed this since launching, the more complicated and the more graphics and more scientific hyper links, the better the story does. There’s an audience here that’s very hungry for long-form, non-partisan content. There’s a lot of agenda-driven news organizations on the West Coast, so we’re trying to be middle of the road and not have any agenda in any direction.”

Part of Hopper’s challenge as editor is building audience trust. Amidst an atmosphere of polarized politics and the rise of fake news, he says the public’s first reaction when they see a brand new news organization is “who funds them, is this propaganda?”

“Our whole strategy in these first months is here’s a human face, here’s why we’re doing it, this isn’t George Soras trying to put some agenda in the city.”

“I can say after eight months at this, [Wilkinson] is the ideal publisher. He’s usually the one encouraging us to be more aggressive, spend more money on coverage, take more risks…this is sort of the mythical ideal that you would want for a news organization,” said Hopper.