Sportsnet 590 The Fan (CJCL-AM) has unveiled a new lineup of hosts and shows, following an unspecified number of layoffs at the network over the summer that included longtime Prime Time Sports host Bob McCown, and Hockey Central at Noon contributors Nick Kypreos, Doug Maclean, and John Shannon. Among the highlights is the return of Tim & Sid to radio with a multi-platform version of their TV show and the expansion of Hockey Central to two hours. Starting off the day’s programming, Hugh Burrill will host a new sports update show from 5:30 – 6 a.m. ET that will cover everything that happened the previous night. In the 6 – 9 a.m. timeslot, Scott MacArthur moves from hosting Blue Jays Talk to join Ashley Docking and former NHL‘er Mike Zigomanis on a new morning show. Good Show with Ben Ennis and JD Bunkis moves from its previous 1 p.m. timeslot to mid-mornings from 9 a.m. to noon. From noon to 2 p.m., Hockey Central expands to two hours featuring Jeff Marek four days a week and David Amber in the host’s chair on Wednesdays. They’ll be joined by former NHL’er Anthony Stewart. Jeff Blair, Stephen Brunt and Richard Deitsch move into the 2 to 5 p.m. slot. From 5 to 7 p.m., Tim Micallef and Sid Seixeiro extend the reach of their popular Sportsnet TV show Tim & Sid back to radio. The show was first established on CJCL-AM back in 2011, before starting its television simulcast on The Score in 2013. Read more here. CHOM 97.7 Montreal is marking its 50th anniversary with a concert Oct. 28 featuring the Tea Party, Sam Roberts Band, Michel Pagliaro and The Damn Truth. The iconic rock station launched on Oct. 28, 1969, when DJ Doug Pringle spun The Beatles’ “Here Comes the Sun.” On-air talent like Terry DiMonte, Tootall, Peppermint Patti and Denis Grondin are credited with helping kickstart the careers of numerous rock giants with CHOM one of the . first stations to play Styx, Supertramp, Genesis, Yes and Chris de Burgh. The station is also celebrating the milestone with “50th anniversary Fridays.” Each Friday at 7:10 a.m., Terry DiMonte will reflect on memorable moments from the past 50 years with a member of the CHOM 97.7 team. The “Chronicles of Rock” segment, hosted by Randy Renaud and airing at 2 p.m. Fridays, will also trace the station’s history, going all the way back to its initial broadcast. Tickets for the Oct. 28 anniversary show go on sale Friday, Sept. 27 via Ticketmaster.

Danaye Maier, co-host of the Virgin Radio (CIBK-FM) Calgary morning show, has been recognized as one of three international Virgin Radio Stars of the Year. Maier has been recognized for creating “A Woman a Day YYC,” an Instagram initiative that celebrates a Calgary woman each day of the year. Following its launch on International Women’s Day this year, Maier sparked a movement, organizing meet and greets between nominees and nominators on the account to celebrate the strengths and successes of women in the community. She’ll travel to London on Nov. 18 to join Virgin Group founder Sir Richard Branson, for a celebration of success achieved by Virgin Radio employees worldwide. The CRTC has approved an application by Akash Broadcasting Inc. to change the authorized contours of its unlaunched commercial ethnic specialty radio station CJCN-FM Surrey, BC. The approval will see the effective radiated power (ERP) of the station increased from 320 to 600 watts (maximum ERP from 1,000 to 1,900 watts), decreasing the effective height of the antenna above average terrain (EHAAT) from 193.9 to 128.5 metres and relocating the transmitter site. The station’s previous transmitter site is no longer available. The commission did not receive any interventions regarding the application. The station’s deadline to be operational is Nov. 28, following a previous 12-month extension.

LISTEN: On this episode of Broadcast Dialogue – The Podcast, Peter Mansbridge, former CBC chief correspondent, on his new self-produced podcast The Bridge – a nightly look at developments in the ongoing federal election. We talk to Mansbridge about #elxn43, taking the political temperature of Canadians, and the joys of semi-retirement. 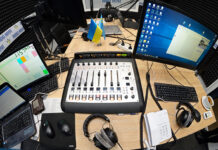