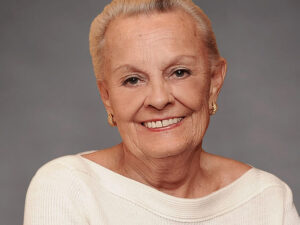 Loretta Rogers, 83, on June 11. The matriarch of the Rogers family and the co-founder of Rogers Communications Inc. (RCI), Loretta Rogers was RCI’s longest-serving corporate director and a member of the Advisory Committee of the Rogers Control Trust. English-born, she was the daughter of Woolworth heiress Maysie Gasque and John Roland Robinson, a Conservative British politician, who was granted the title of Baron Martonmere and later served as the Governor of Bermuda. Loretta married Ted Rogers in 1963 and served as the telecom and broadcast pioneer’s closest confidante. She invested her time and support to many charitable endeavours, notably establishing the Ted Rogers Centre for Heart Research in 2014 with a $130 million donation, the largest private donation in the history of Canadian health care. She also founded the Loretta A. Rogers Chair in Eating Disorders at Toronto General & Western Hospital, and the Ted Rogers Family Chair in Heart Function at the Peter Munk Cardiac Centre. She had served on the board of directors of the University Health Network Foundation since 2004, was on the Bishop Strachan School Foundation from 1980 to 2009, as well as President & Director of the Canadian Lyford Cay Foundation since 1980. She had also served on the board of the Robert Bateman Foundation since 2012 and was the founding Director of Toronto eating disorder support organization, Sheena’s Place. Read more here.

Jim Nihda, 92, on June 7, after suffering a debilitating stroke in August 2021. Nihda’s nearly four-decade career in broadcasting began after receiving radio training with Toronto’s Central Tech High School in 1949. His first position in radio broadcasting was with 1050 CHUM Toronto, as a daytime engineering trainee. He left CHUM that fall to join Oshawa’s CKLB as a broadcast technician. In 1951, Nihda returned to Toronto to work with L.J. Hagerty Advertising in their production department. He joined CBC later that year, helping launch CBLT-TV in 1952. He eventually moved into radio and became a top-ranked technician, working with The Happy Gang, The Rhythm Pals, Tommy Hunter, and Juliet, to name a few legends of Canadian radio and television. During the 1950s and ‘60s, Nihda traveled extensively with the “Canada Entertains” group who performed shows for Canadian UN and NATO troops in the Gaza Strip, England, Germany, France, Italy, Churchill and Resolute Bay. He single-handedly produced these shows for Canadawide re-broadcast on radio. During this time, aviation was an integral part of his life that allowed him to fully enjoy two of his interests – aircraft and photography, resulting in a remarkable portfolio of photos depicting RCAF aircraft from a golden age in Canadian aviation. Over the years, Nihda helped produce radio broadcasts of numerous historic events including royal visits, the Royal Canadian Henley Regatta, and the opening of the St. Lawrence Seaway in 1959. In 1966, he was promoted to Duty Manager for Radio & Television at CBC Toronto’s Jarvis Street studios, where he took responsibility for CBC Network TV and Radio weeknight and weekend programming decisions. He retired from the CBC in 1985.

Fred Cole, 87, on May 9. The longtime chief engineer at Victoria radio stations CKDA and CFMS, Cole began his career in Ontario working at the Toronto AM stations of broadcasting icons Jack Kent Cooke and Ted Rogers. He went west at the behest of David Armstrong in 1967, remaining chief engineer of both Capital Broadcasting stations until their sale and dissolution in 1995. Cole went on to work as a technician at The Q (CKKQ-FM) Victoria, in addition to continuing to do contract tech installations on Vancouver Island.