CBC Podcasts has shared details of its podcast slate for Spring/Summer 2022, which includes Kuper Island, an exploration of the dark history of the notorious Kuper Island Residential School, the return of award-winning investigative series Someone Knows Something for a seventh season, and CBC and Radio-Canada’s first podcast collaboration to tell the same story in both English and French on The Village: The Montreal Murders / Le Village : meurtres, combats, fierté. Read more here.

CBC is broadcasting Juno Week activities across its platforms, including Saturday evening’s Opening Night Awards, hosted by Angeline Tetteh-Wayoe and Ann Pornel, where 40+ JUNO Awards, including the Walt Grealis Special Achievement Award and the Humanitarian Award, are handed out. The week culminates in Music Day on CBC this Sunday, leading up to the 51st Annual JUNO Awards broadcast, hosted by Simu Liu.

The Canadian Academy of Recording Arts and Sciences (CARAS) has announced that the JUNO Awards will head back to Edmonton in 2023. The city will once again host JUNO Week festivities from March 6-12, 2023, with the 52nd Annual JUNO Awards to be broadcast live on CBC from Rogers Place on Sunday, March 12, 2023. This is the second time the province’s capital will welcome the JUNO Awards, after the first visit in 2004 when Alanis Morissette hosted the show.

Pattison Media Prince George, alongside the Spirit of the North Healthcare Foundation, teamed up for their annual Spirit Day on May 5, broadcast live on both 99.3 REWIND Radio (CKDV-FM) and 101.3 The River (CKKN-FM) from 7 a.m. to 7 p.m., along with coverage on CKPG-TV. With the support of the community and phone teams, 2022 shattered the 2021 record of $125,000, bringing in over $265,000 in support of healthcare in Northern B.C. 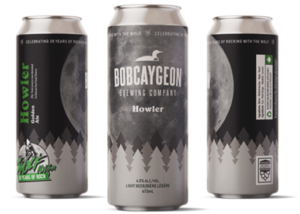 101.5 The Wolf (CKWF-FM) Peterborough is celebrating its 30th birthday this year. To commemorate the milestone, the station has partnered with Bobcaygeon Brewing Company to launch its 30th birthday beer, Howler. The cream ale will be available starting May 14 with The Wolf to broadcast live from Bobcaygeon Brew Co. that day from 11 a.m. – 3 p.m. The Wolf has also partnered with Kawartha Food Share, which will receive 25 cents from each can sold.

Evanov Communications’ Winnipeg stations Energy 106 (CHWE-FM), Hot 100.5 (CFJL-FM) and 92.7 CKJS (CKJS-FM) hosted their second annual Radiothon during the Canadian Mental Health Association’s 70th annual Mental Health Week. The 12-hour event raised a total of $124,209 for Kidthink Children’s Mental Health Centre, a treatment centre and outreach program that focuses on child therapy and well-being for Manitoba kids, aged 12 and under. Over and above the Radiothon, the stations provided listeners with information about available resources and action plans for anyone in a situation looking to get help.

Formula 1 and SiriusXM have announced a multi-year extension to their relationship, which will continue to deliver coverage of every F1 race to SiriusXM listeners nationwide through 2024. Each event will air live from start to finish on SiriusXM channel 81 (ESPN Xtra). Listeners will hear the BBC Radio 5 Live broadcast for each event.

Tom Webster, who recently announced his departure from Edison Research, will be joining podcast adtech newsletter, Sounds Profitable, as a partner on June 1, teaming up with Bryan Barletta. Webster’s blog I Hear Things and its companion podcast will be assumed under the umbrella of Sounds Profitable going forward, where Webster will be a regular contributor.

LISTEN: CBC News has started recruiting for 14 new permanent positions, focused in small and medium sized markets like Nanaimo, Cranbrook, Grande Prairie, Kingston and the North. On this episode of Broadcast Dialogue – The Podcast, we welcome Susan Marjetti, General Manager of News, Current Affairs & Local, for CBC to talk about the public broadcaster’s renewed focus on local connection, ongoing criticism about CBC’s role, newsroom diversity, and more. Listen on your favourite podcast app or here:

LISTEN: Mark Sutcliffe is the host of the Digging Deep podcast, one of the Sound Off Podcast network’s largest shows, in which he leans on the knowledge and experience gained from a lengthy career in the broadcast industry. On the latest episode of the Sound Off podcast, Matt Cundill talks to the former columnist, talk radio host, baseball play-by-play announcer, and Sunday morning political TV host, about his start in broadcasting before he had even graduated from high school, and some of the biggest moments in history that Sutcliffe has covered since the ‘90s.

The Allan Waters Young Broadcaster of the Year Award in memory of Steve Young will close to nominations this Friday, May 13 at midnight. This will be the 13th annual award recognizing a remarkable young broadcaster. Anyone working in the industry can nominate any worthy broadcaster so long as they meet the following criteria: candidates must be under 31 years of age as of Dec 31, 2021; must work in either On-Air, Programming, Promotion, Production or Creative; must be Canadian Citizen or Landed Immigrant; and must have made a significant, documented contribution to the community they serve, the radio industry or their craft. Learn more here.