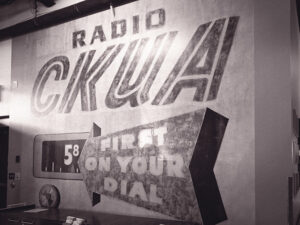 CKUA Radio, Alberta’s donor-funded community radio network, is celebrating 95 years of broadcasting this week. CKUA, the first public broadcaster in Canada, launched on Nov. 21, 1927 thanks to a provincial grant that allowed the University of Alberta Department of Extension to build a transmitter on campus and purchase CFCK from Radio Supply Company Limited. Starting out broadcasting lectures and other educational content, the community station has since entrenched itself as a cultural institution with host-curated programs across genres from blues to folk, jazz, hip hop and classical. Over the years, hosts have included entertainer Robert Goulet, conductor and composer Tommy Banks, broadcasters Bryan Hall and Terry David Mulligan, Stony Plain Records founder Holger Petersen, and folk singer Celeigh Cardinal. In 2016, CKUA expanded with the establishment of a studio at Calgary’s National Music Centre (branded as Studio Bell), in addition to its 16 transmitters across the province. Read more here. Northern Native Broadcasting (NNB) is reviving its project for an Indigenous radio station in Vancouver. First approved in 2017, the CRTC has given NNB until Aug. 2023 to launch the English- and Indigenous-language Type B Native FM station (CJNY-FM). NNB says its circumstances have improved, blaming the influence of consultants under former CEO Greg Smith for running the organization into debt and nearly leaving parent station, CFNR-FM Terrace, bankrupt. “Months of delays and consulting fees drained our financial resources with no return on this considerable investment,” NNB stated in its application, saying the pandemic exacerbated the situation by preventing any further close interaction with lower mainland Indigenous nations as well as potential investors and revenue sources. NNB says since March, its economic situation has rebounded to the point where they can once again make the project a reality. While an extension has been granted to Aug. 31, NNB says it hopes to launch the station in February. 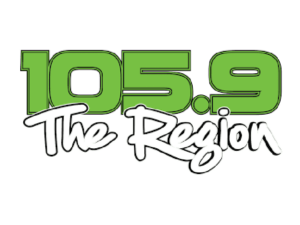 105.9 The Region (CFMS-FM) Markham has applied to the CRTC for a rebroadcast signal to improve its reach from 44% to almost 61% of households in the region and reduce technical challenges and interference. In its application, the station says current technical challenges give an advantage to stations spilling into the market from Toronto, Durham and Newmarket who can claim to have better coverage due to their larger signals and sell unused airtime deeply discounted. “We can either lower our rates to unsustainable levels or let the business go,” the station asserted in its application. “Neither are long-term solutions for serving this community which the Commission recognized as being underserved in Decision 2012-487 that granted this license. The only partial coverage of the market has an impact on the ability of CFMS to reach revenue targets and significantly reduces the possibility of it being self sustaining. The radio market is under duress having suffered like all businesses during the pandemic. However, with substitutes for audio content increasingly being made available to consumers and a stagnating advertising market, the road to recovery for all radio is projected to be long and slow.” 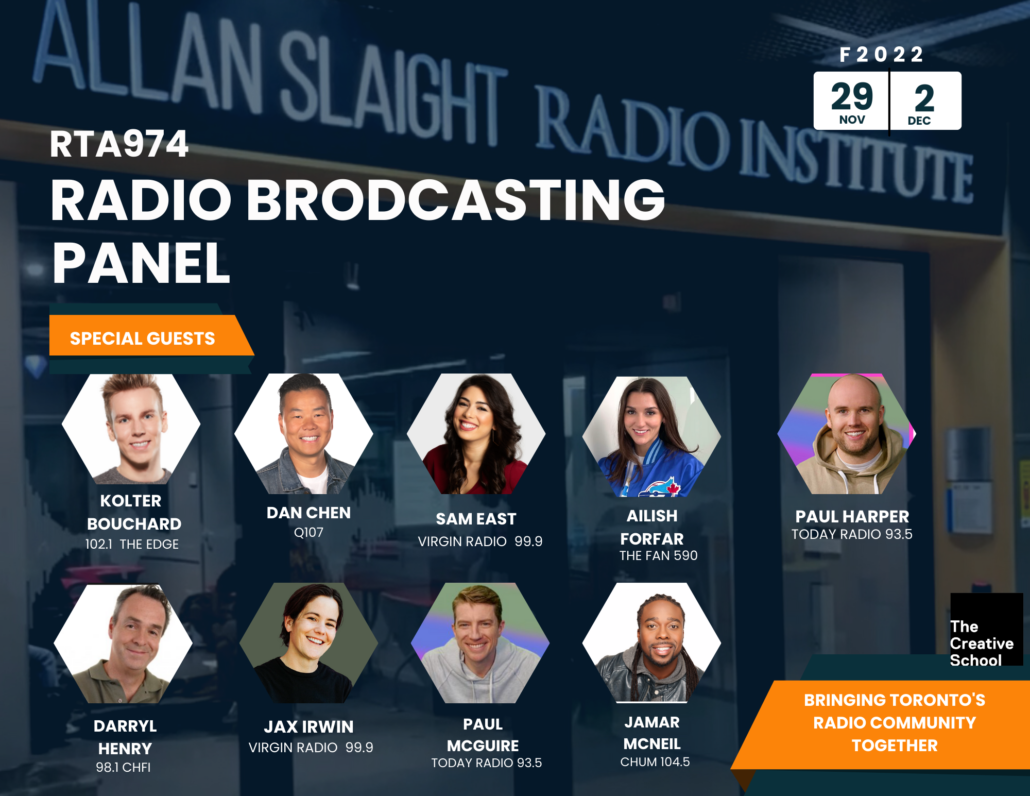 The Allan Slaight Radio Institute at Toronto Metropolitan University (TMU) is hosting an upcoming gathering of radio personalities who’ll share their experiences with students, including Kolter Bouchard of 102.1 The Edge (CFNY-FM), Dan Chen of Q107 (CILQ-FM), Sam East and Jax Irwin of Virgin Radio 99.9 (CKFM-FM), Ailish Forfar of Sportsnet 590 The Fan (CJCL-AM), Paul McGuire of Today Radio 93.5 (CFXJ-FM), Darryl Henry of CHFI, and Jamar McNeil of CHUM 104.5. Instructor Harry Corro put the panel together to address his radio broadcasting class, RTA974 at TMU’s The Creative School. The students will be presenting their final radio project to the panel. Media Technology Monitor (MTM) has released new data that indicates podcast adoption in Canada continues to climb. It found that over one-third (36%) of the English-speaking population in Canada is now listening to podcasts. That’s up from 30% in the fall of 2019 with podcast listenership growing by 20% during the pandemic, according to MTM. Comparatively, one in four Francophones has listened to a podcast in the past month, up from 17% in fall 2019. Those who stream AM/FM radio or use music streaming services are more frequent podcast users with two thirds of listeners indicating they get their podcast content from a single source. Spotify leads podcasting apps as the most common way for listeners to access content. Read more here. 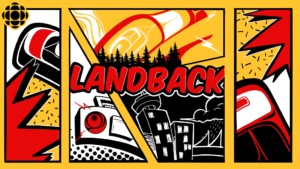 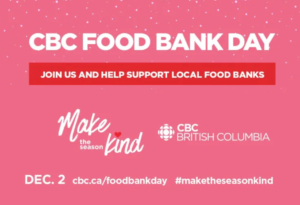 CBC British Columbia’s annual Food Bank Day returns Dec. 2 with a full day of special programming on CBC Radio One and CBC Listen in support of Food Banks BC. After raising over $2.9 million for local food banks in 2021, CBC is bringing back the community event, as food bank demand remains high. While touring the CBC Vancouver Broadcast Centre is a yearly highlight for many, this year the building will not be open for tours. However, the centre is opening its doors to live studio audiences for live broadcasts of CBC Radio One programs.

SOCAN Foundation has announced the winners of the SOCAN Foundation Awards for Young Canadian Songwriters, sponsored by SiriusXM Canada. Five cash prizes of $5,000 are awarded to young creators from across the country in recognition of their exceptional work and potential. This year’s winners are: Anna Johnson (Alberta) for “Boys on Bikes” (pop); AVIV (Ontario) for “Drowning in the Culture” (indie pop); Avril Jensen (Quebec) for “van gogh” (pop); Danie (Ontario) for “Summer” (soul/jazz); and Velours Velours, (Quebec) for “Tournesol” (country rock). Honourable mentions include: DeeDee Austin (Nova Scotia) for “Buried Truth” (pop); Brighid Fry (Ontario) for “In the Grass” (singer-songwriter); Allegra Jordyn (Ontario) for “Technicolour” (pop); Fin McDowell (Alberta) for “Losing Game” (folk); Mia Kelly (Québec) for “Garden Through The War” (alt indie-folk). 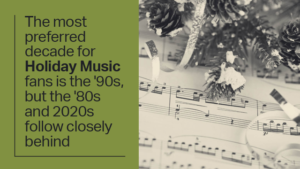 LISTEN: Earlier this year, ACTRA Toronto undertook a survey looking at the extreme vocal work that video games are now demanding of voice actors. In response to those concerns, University of Cincinnati Professor of Voice D’Arcy Smith has created the Vocal Combat Technique, a method to help voice actors and performers make aggressive sounds in the healthiest way possible. He joins us on this episode of Broadcast Dialogue – The Podcast, joined by Voice Health Expert Katelyn Reid. Both performers themselves, Reid and Smith offer advice on how to optimize your vocal health no matter what part of the performance industry you work in. Listen on your favourite podcast app or here:

LISTEN: Tony Doe, a Nigerian radio and podcast consultant, is on the latest Sound Off Podcast. With stable, cheap internet much harder to come by and the country fragmented by both language and the fact that many have multiple SIM cards and phone numbers, Doe walks us through the way radio stations have come to handle these challenges and what it’s meant for the development of Nigerian broadcasting as a whole. Listen on your favourite podcast app or here: