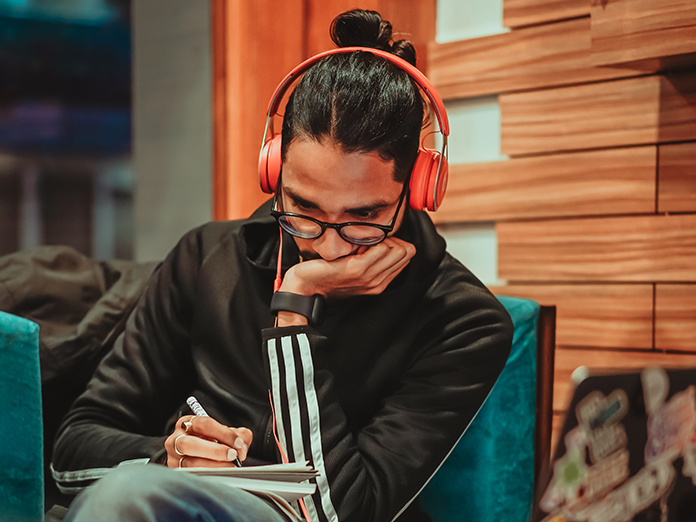 Podcasts are attracting a new audience as media habits continue to be impacted by the pandemic, according to the latest Infinite Dial Canada survey from Edison Research and Triton Digital.

The telephone survey of 1,001 Canadian adults, 18+, was conducted this past February in both English and French. The results are weighted to Canadian census data.

The study found that smartphone ownership was flat year-over-year at 86% of the total Canadian population. Tablet ownership, on the other hand, jumped from 46 to 54% with Stephanie Donovan, Triton Digital’s SVP, Publisher Sales North America, crediting the devices as part of the “new normal of COVID.”

Smart speaker awareness was also flat at 77% year-over-year, with ownership moving up one per cent from 26 to 27%, on par with Australia and slightly behind 32% of Americans who own at least one smart speaker.

Infinite Dial found that radio tuning across broadcast and AM/FM streaming grew, with 70% of Canadians listening weekly, up from 69% in 2020. While monthly online radio listening was unchanged year-over-year at 21%, Donovan said the stability is striking.

Seven out of 10 or 71% of survey respondents said they had listened to online audio in the last month. While up just 1%, Donovan considers this a nice increase, considering the havoc COVID-19 has created in many people’s routines. Weekly online audio listening also experienced a slight bump from 60 to 61%.

The province responsible for the most online listening was Ontario, followed by Albertans who accounted for the biggest increase year-over-year, in addition to B.C. 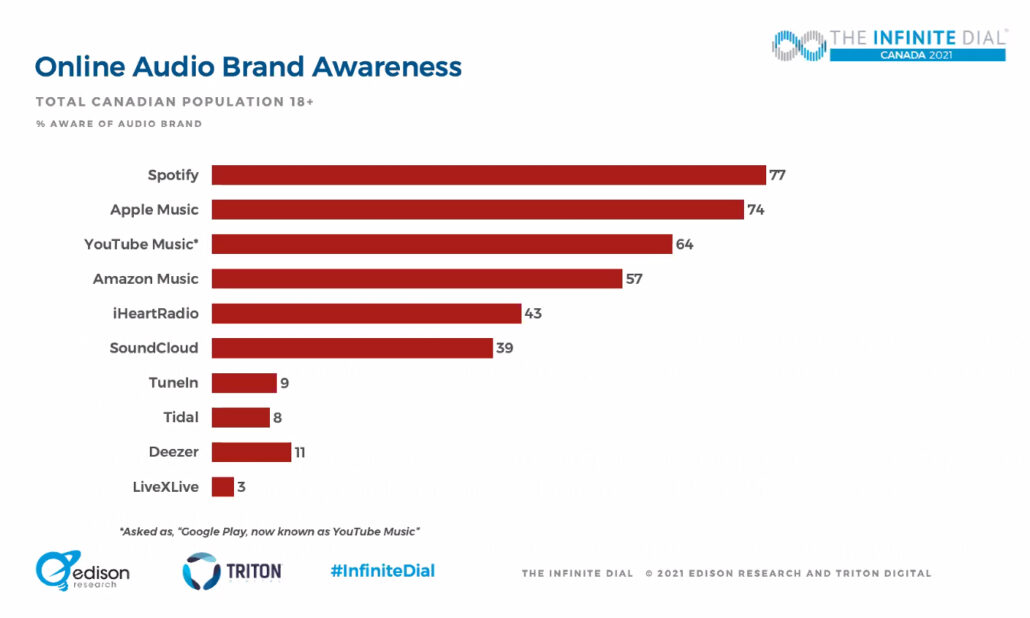 When it comes to brand awareness in the online audio space, Canadians are most familiar with Spotify (77%), Apple Music (74%), and YouTube Music (64%).

That translates to monthly usage with 41% of Canadians saying they use Spotify most often as the app continues a pattern of consistent growth over the last three years. Apple Music and YouTube Music tuning were up incrementally year-year-over, but down significantly from 2019. 25% of Canadians said they used Apple Music most often in 2019 vs. 15% this year. Stingray (6%) was down year-over-year, while CBC Music was flat at 9%, and Amazon Music up from five to seven per cent this year. 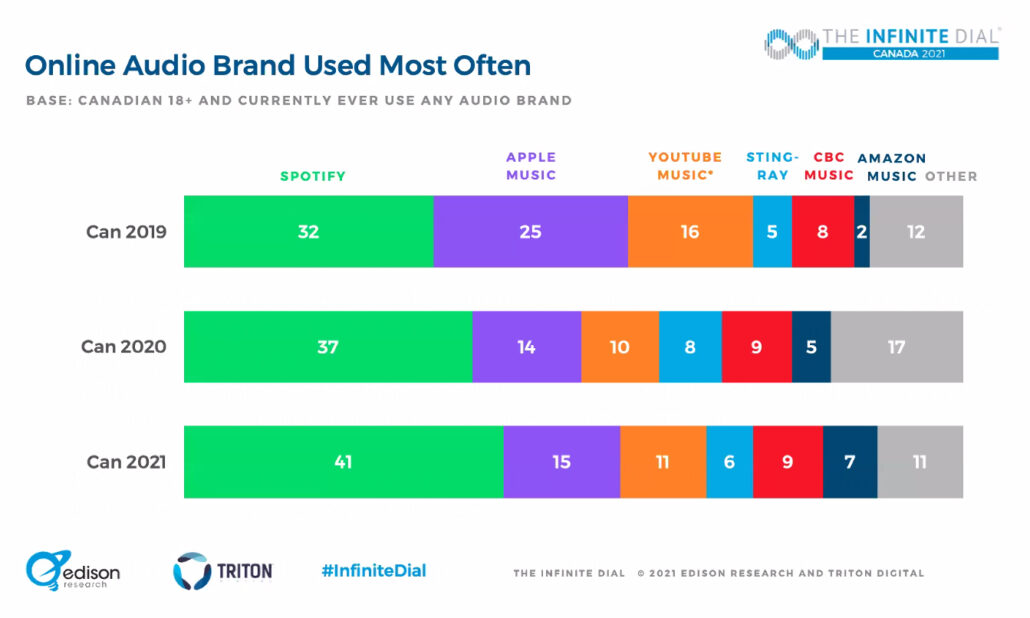 The study makes a direct correlation between online audio listening and smart speaker ownership with 47% of those who use Spotify most often, owning a smart speaker.

What is online audio listening replacing? 31% said it’s over-the-air radio, another 30% said owned music and four per cent said SiriusXM. 35% said their online audio tuning is new time not taken from other sources. 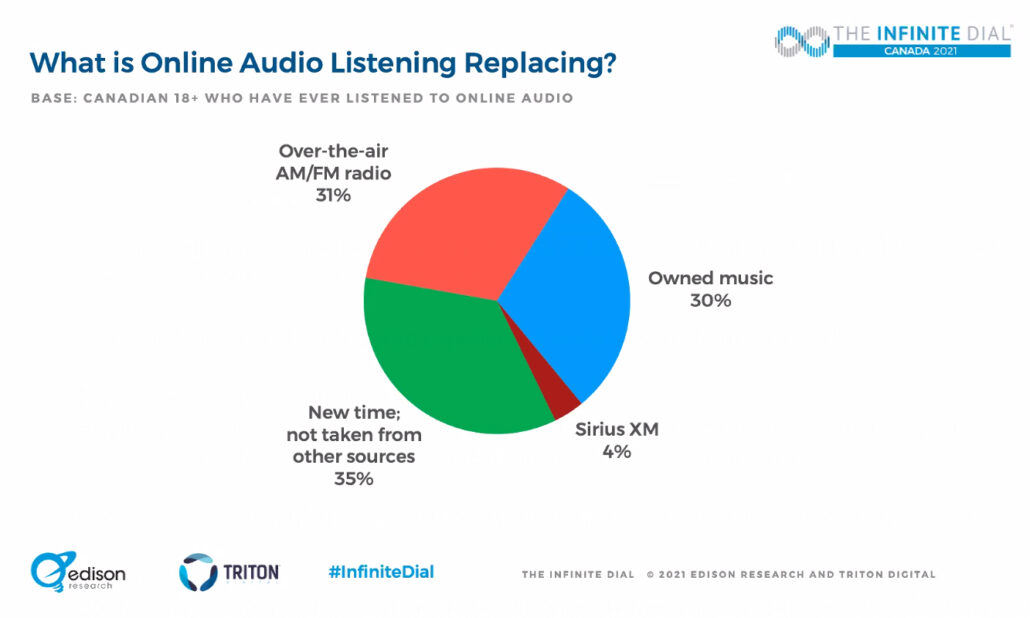 With the move to work from home over the last year, the study shows that driving for many Canadians has dropped off sharply, plummeting from 92% to 77% monthly, year-over-year. That pandemic disruption was greater than in the U.S., which saw a smaller drop from 88 to 83%.

The biggest decrease was in the 18-34 demo, with their vehicle use falling from 89 to 66% in the last month. 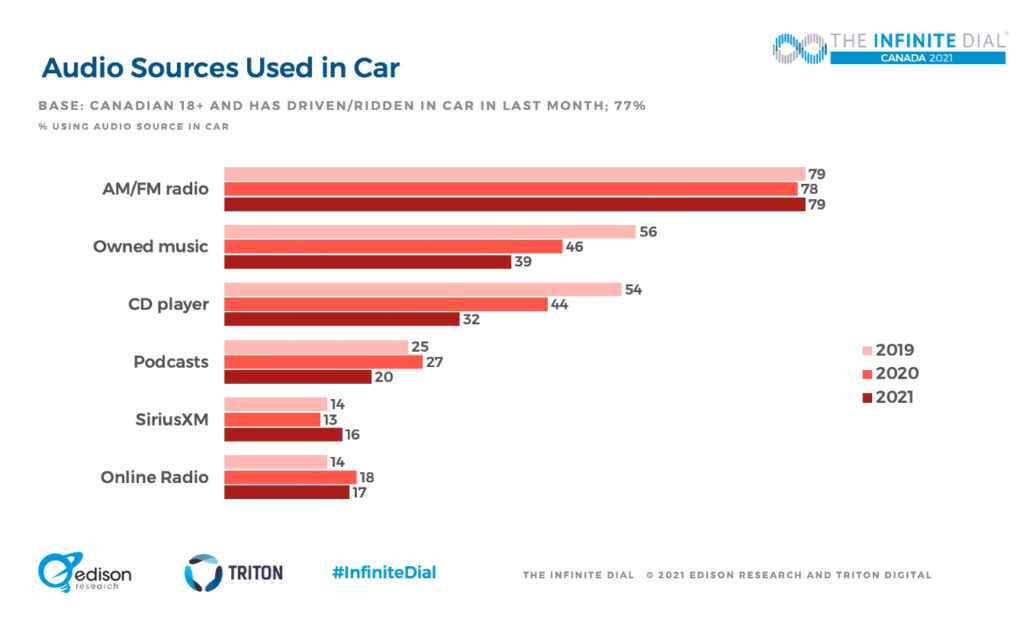 AM/FM radio continues to dominate in the car, with almost eight in 10 Canadians or 79% tuning radio. Podcast listening in-car took a hit, down from 27 to 20%, credited to the drop in younger drivers. SiriusXM experienced a three per cent jump (16%), while online radio was stable, moving from 18 to 17%.

Familiarity with the term “podcasting” has grown from 74 to 78% in Canada over the last year. Those who said they have ever listened to a podcast went from 50 to 57%, while those who listen to podcasts monthly saw incremental growth, from 37 to 38%. Infinite Dial Canada found that the gender balance of those listening is now almost identical to the population makeup, 53% women vs. 47% men.

Tom Webster, SVP, Edison Research, says while those numbers may look flat at first glance, the drop in podcast consumption in-car, actually means the listening gap was filled by podcast tuning elsewhere with a lot of churn underneath those numbers.

“What I would suggest is flat is the new up and what looks like flat here is actually one significant container of listening going away for a segment of the population, those who did not drive or ride,” said Webster. “Those listening containers were replaced in other areas…at home, perhaps on walks, that gap was filled in, so while there was certainly a behaviour difference in riding or driving in-vehicle, that did not result in a drop in overall podcast listening.”

Weekly podcast consumption moved from 23 to 24% year-over-year, while the average number of podcasts Canadians listen to per week has gone down from five last year to six. 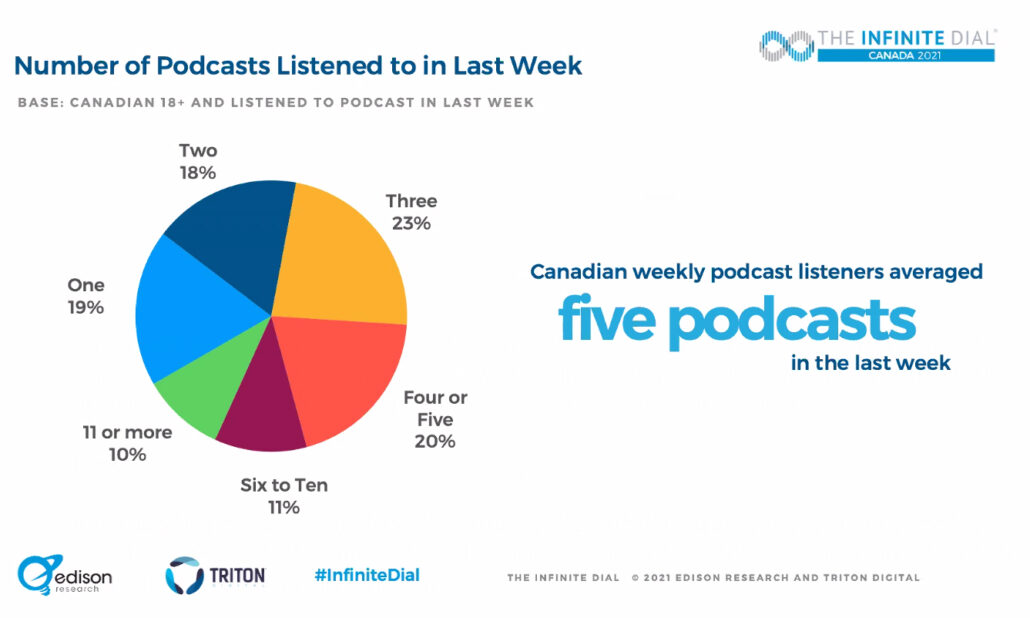 Donovan believes that drop in the average number of podcasts is also indicative of churn with a 10% increase in the number of those that responded they listened to one podcast per week.

“When you look at the average number of people listening to podcasts, that strong growth of one podcast per week is really bringing that average down. It’s not as much of a story of a decrease,” said Donovan. “I really think it’s the average and the positive is that we’re going to find that there’s newcomers coming in.” 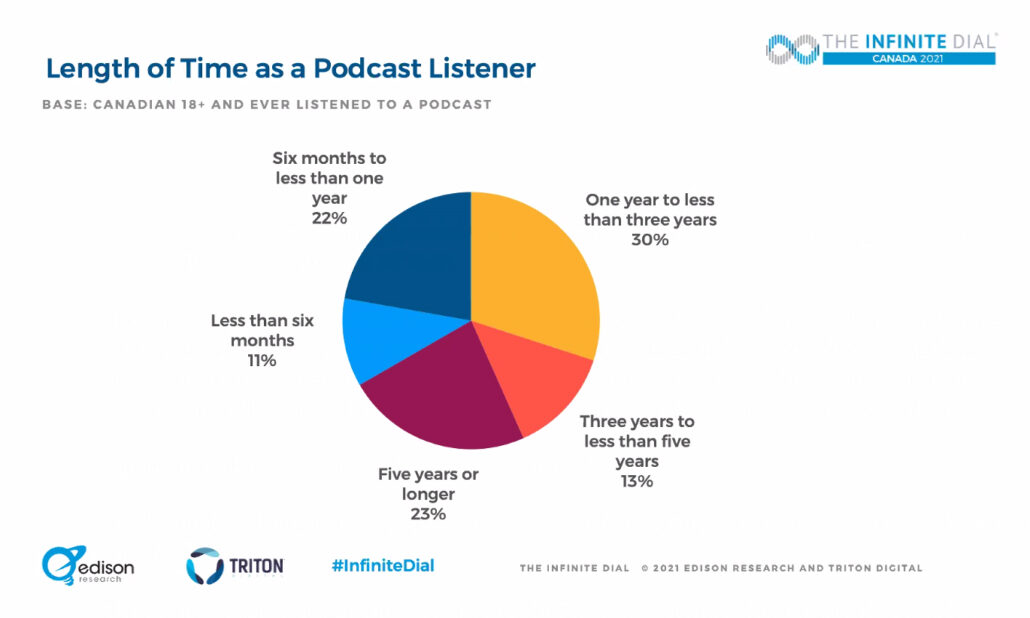 This year’s study indicates 11% of those who’ve ever listened to a podcast have been a listener for less than six months, and another 22% just six months to a year.

Infinite Dial also found that pandemic-related disruptions have resulted in a shift to more desktop listening with 65% listening on mobile devices vs. 35% on a computer or laptop. That compares to 74 and 26%, respectively, in 2020.

Another study highlight is the finding that almost half (48%) of Canadians are listening to podcasts from Canadian producers, while 39% consume podcasts produced by public radio broadcasters, like CBC or NPR.