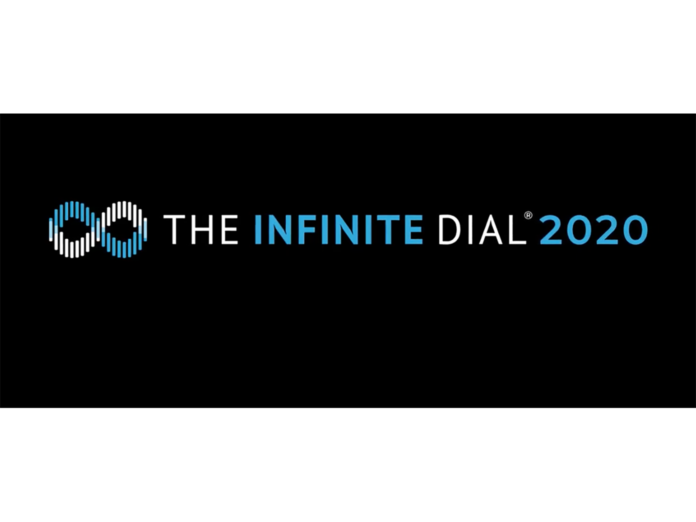 How much online audio people are consuming amid the current disruption to most people’s daily routines is unpredictable right now, according to Tom Webster, Senior Vice-President at Edison Research.

“I don’t think we should assume podcast listening is going to go up right now,” Webster told Thursday’s Infinite Dial 2020 webinar. “What happens in discontinuous periods like this is that media listening becomes willy nilly. It goes haywire in unpredictable ways and just because we’re working from home doesn’t mean we have the context to listen to more podcasts. If you have kids at home, good luck doing anything.”

John Rosso, President of Market Development, Triton Digital, noted the disruption in his own listening habits this week.

“I’m listening less to daily news driven podcasts and instead my news is coming live from broadcasts, television or radio, because of the timing component,” said Rosso. “My podcast consumption has gone to more lean back, more entertainment than information.”

Usually presented before a live audience, the results of the 2020 Infinite Dial study – the longest-running digital media tracker of consumer behaviour in America – moved online only this year to accommodate those working from home, including Webster and Rosso.

Infinite Dial is based on a survey conducted in January and February by random digit dialing 1,502 Americans, 12+. Among this year’s findings are that AM/FM radio is still king in the car; smartphone, tablet and smartwatch growth has stalled; and that monthly podcast listening has now cracked the 100 million listener ceiling.

Infinite Dial found that monthly podcast listening grew from 32 to 37% of the U.S. population or 104 million Americans, breaching the 100 million mark for the first time – a 16% jump year-over-year. 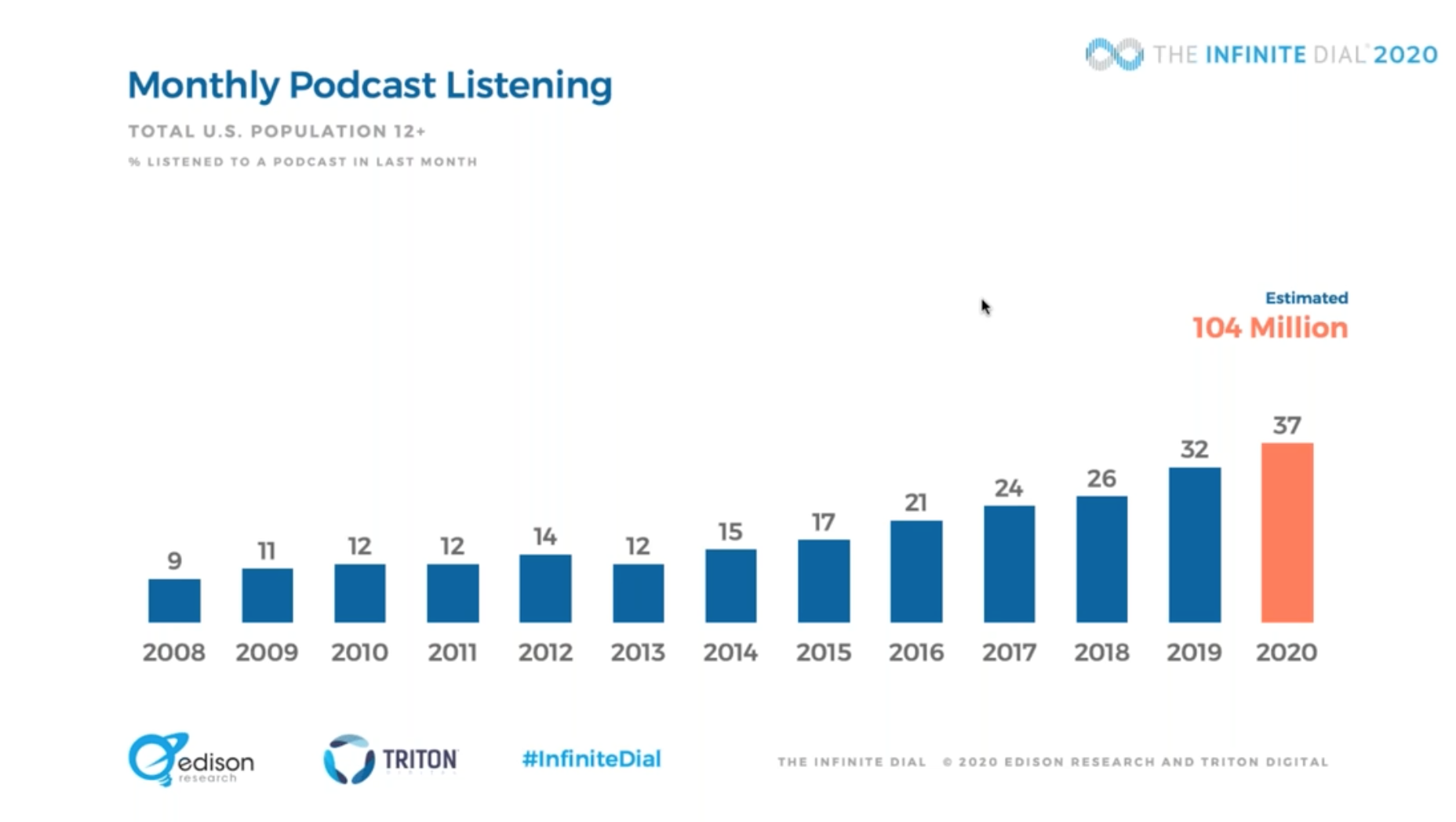 Equality in who those monthly listeners are improved to 39% men and 36% women – a much more balanced breakdown than the 36% of men and 29% of women who were monthly listeners in the 2019 study. All age demos saw growth, with Spotify’s increased share of podcast listening particularly driving listenership with 12 to 34-year-olds, moving from 42 to 49%.

Weekly podcast listening saw small gains, growing incrementally from 22 to 24% or 68 million weekly listeners. Average time spent listening was also flat, going from 6:29 in 2019 to 6:39. The average number of podcasts listened to per week fell slightly from seven last year to six in the latest survey. 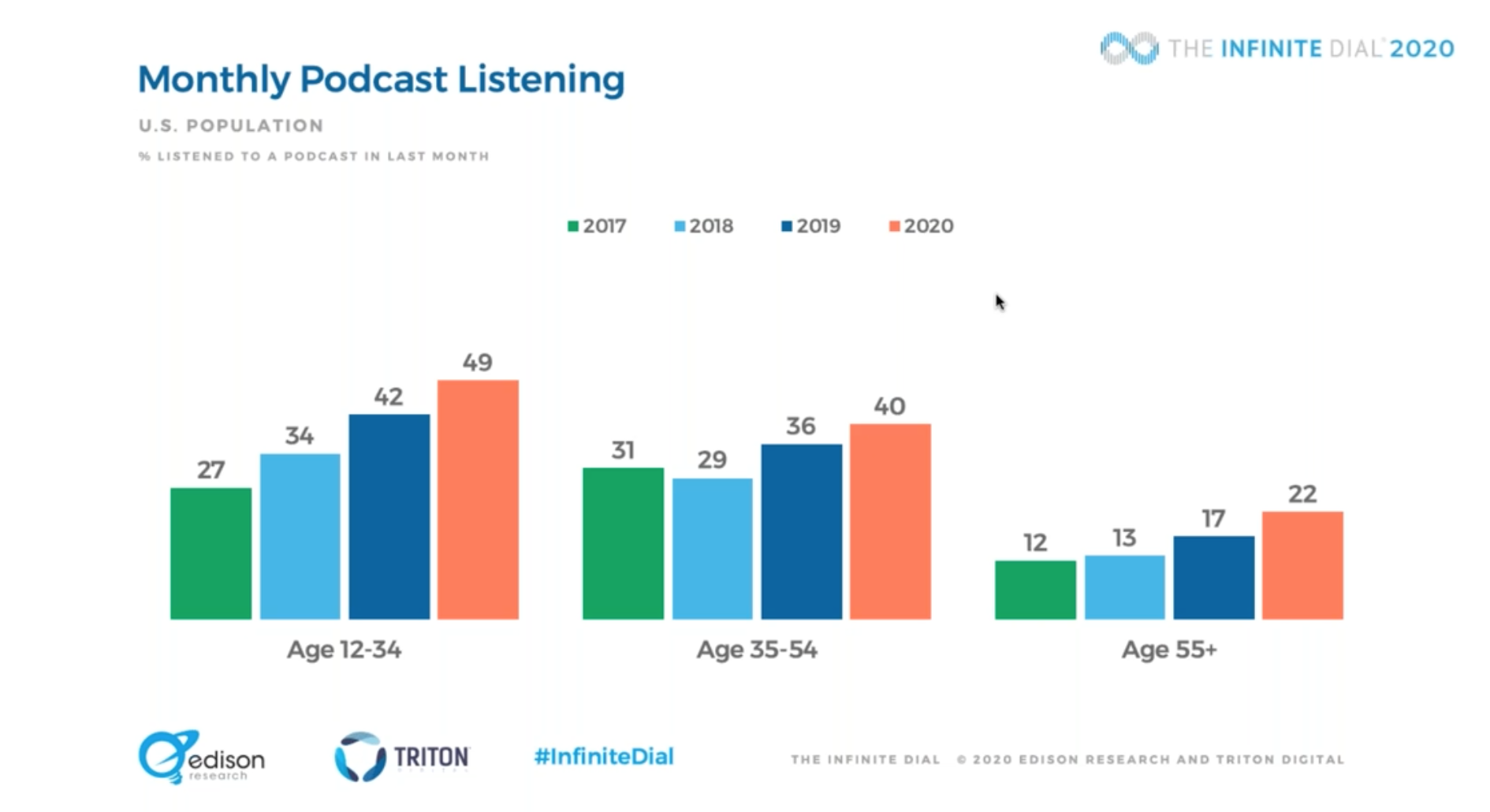 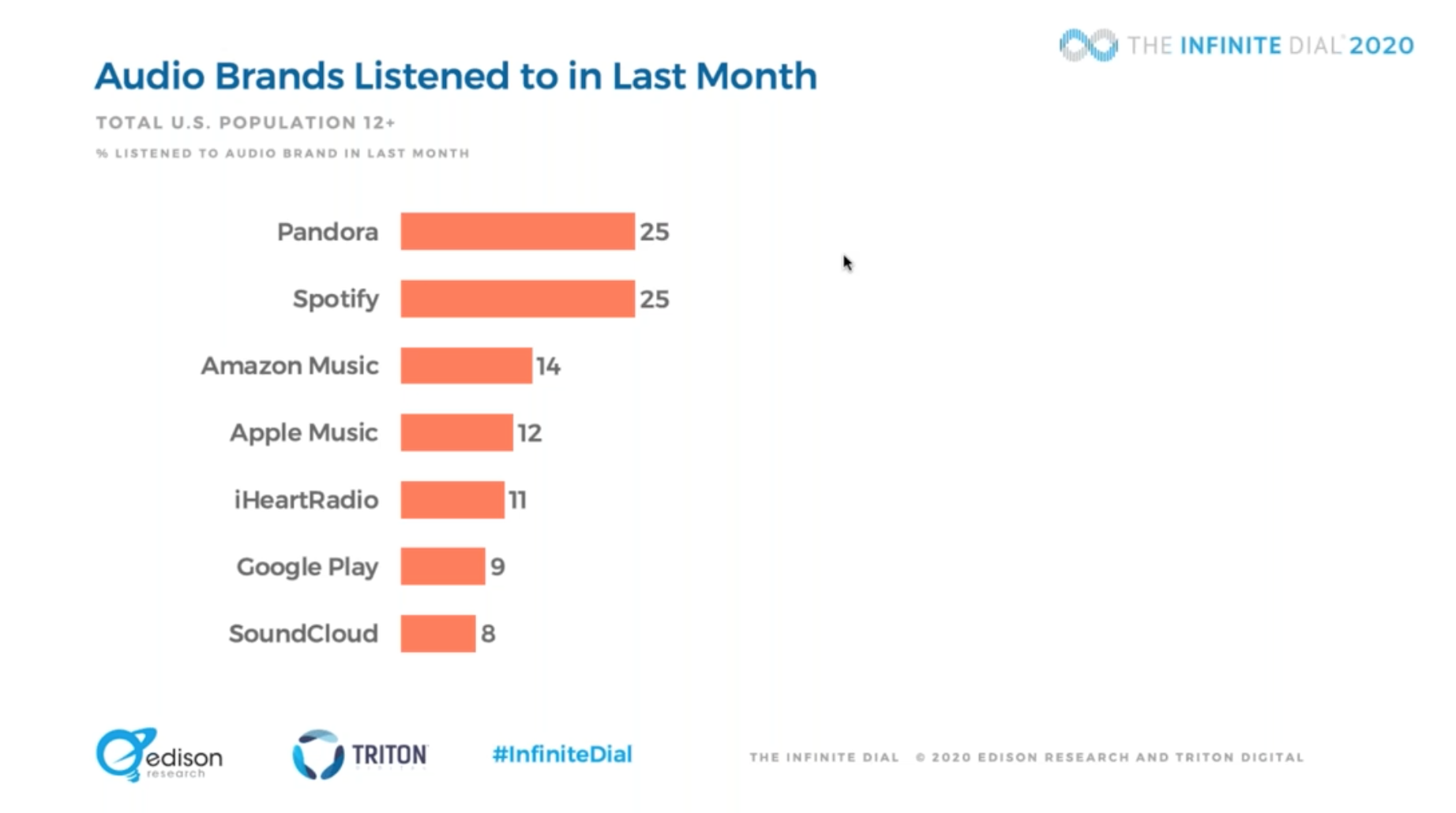 Pandora and Spotify are the two leading audio brands in the U.S., which combined share roughly half the market, followed by Amazon Music, which vaulted into third place, Apple Music, iHeartRadio, and Google Play.

Weekly online audio listening was flat at 60% of Americans or 169 million. The rapid growth previously seen has levelled off with listening going down from 16:43 to 15:12. 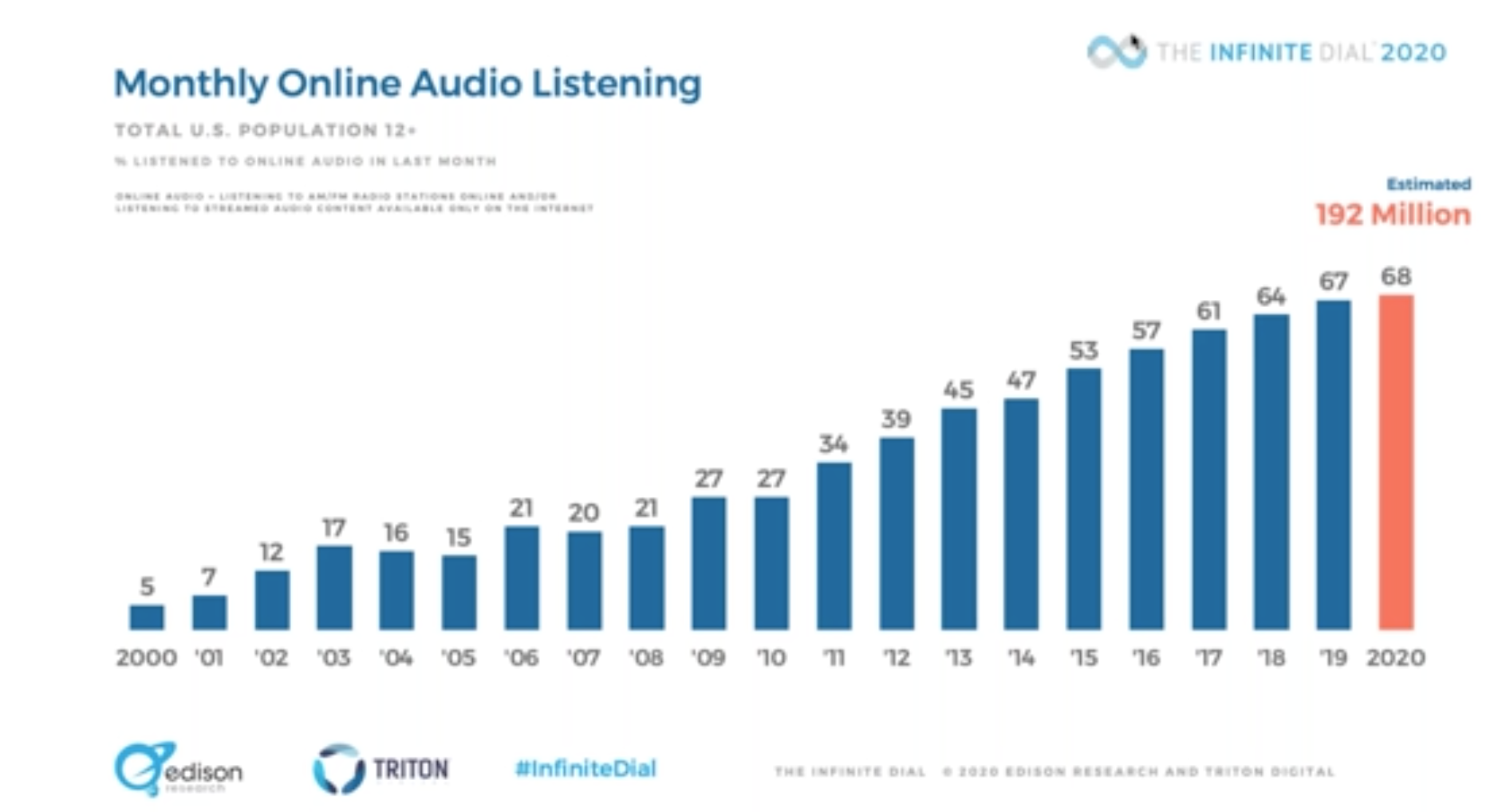 With smartphone, tablet and smartwatch adoption stalled, this year’s study indicates that in-car shows the most potential for digital audio growth.

AM/FM radio continues to lead in-car listening at 81%, down one percentage point from last year. Owned music in-car made gains, moving from 45 to 48%, however Webster believes that finding could be based on survey confusion about whether playlists on Spotify or Google Play constitute “owned” music (for the purposes of the survey they do not). Online radio is now being consumed in-car by 33% of drivers, up from 28%, while online audio via cel phone went up from 41 to 45% year-over-year. 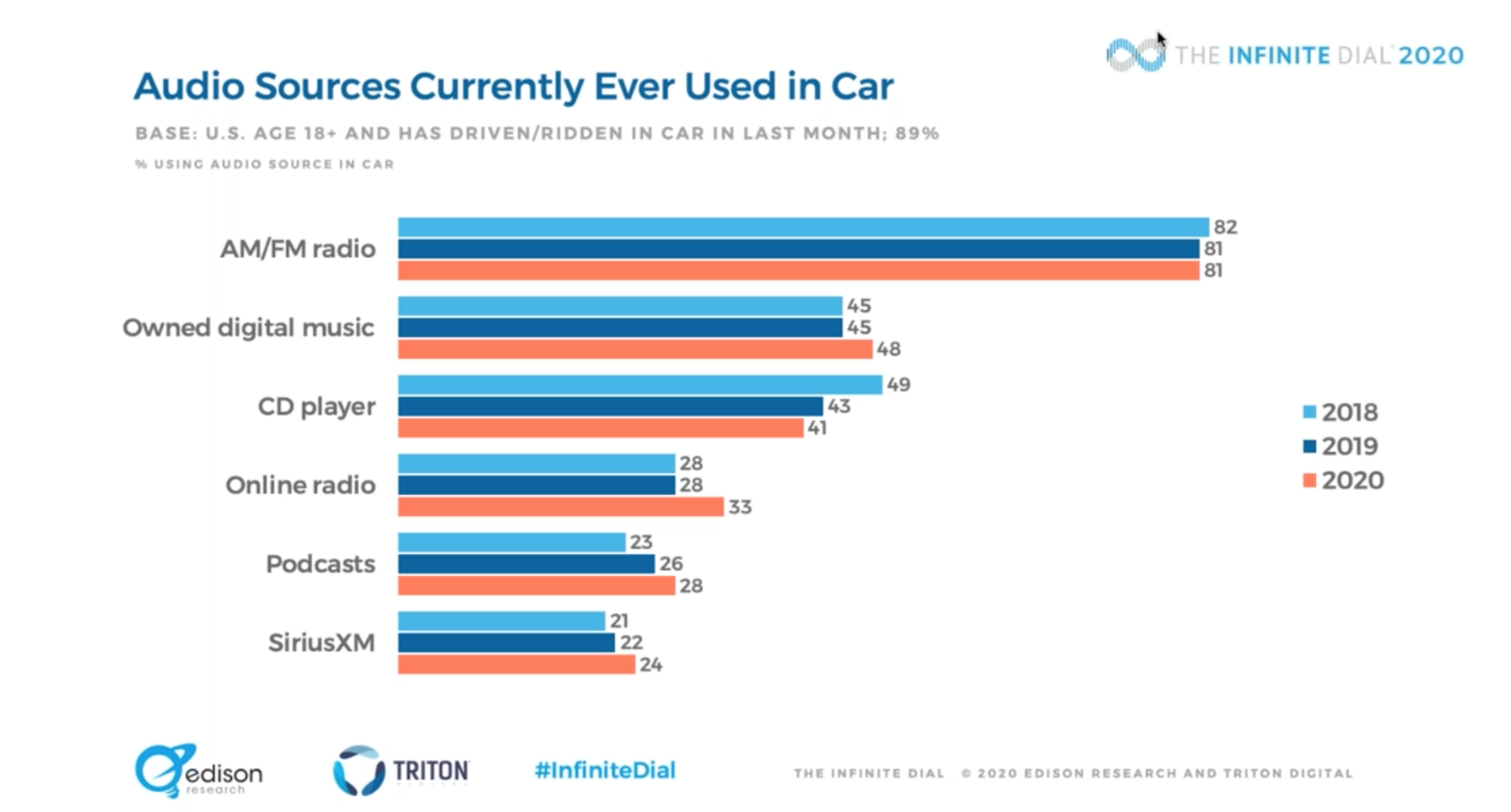 Overall social media usage has flattened out, moving from 79 to 80% of Americans, 12+, year-over-year, or 226 million people.

Mobile video app TikTok had the strongest social media debut of the year, debuting with those aged 12-34 at 25%. What’s App also made gains with growth from 23 to 29%. 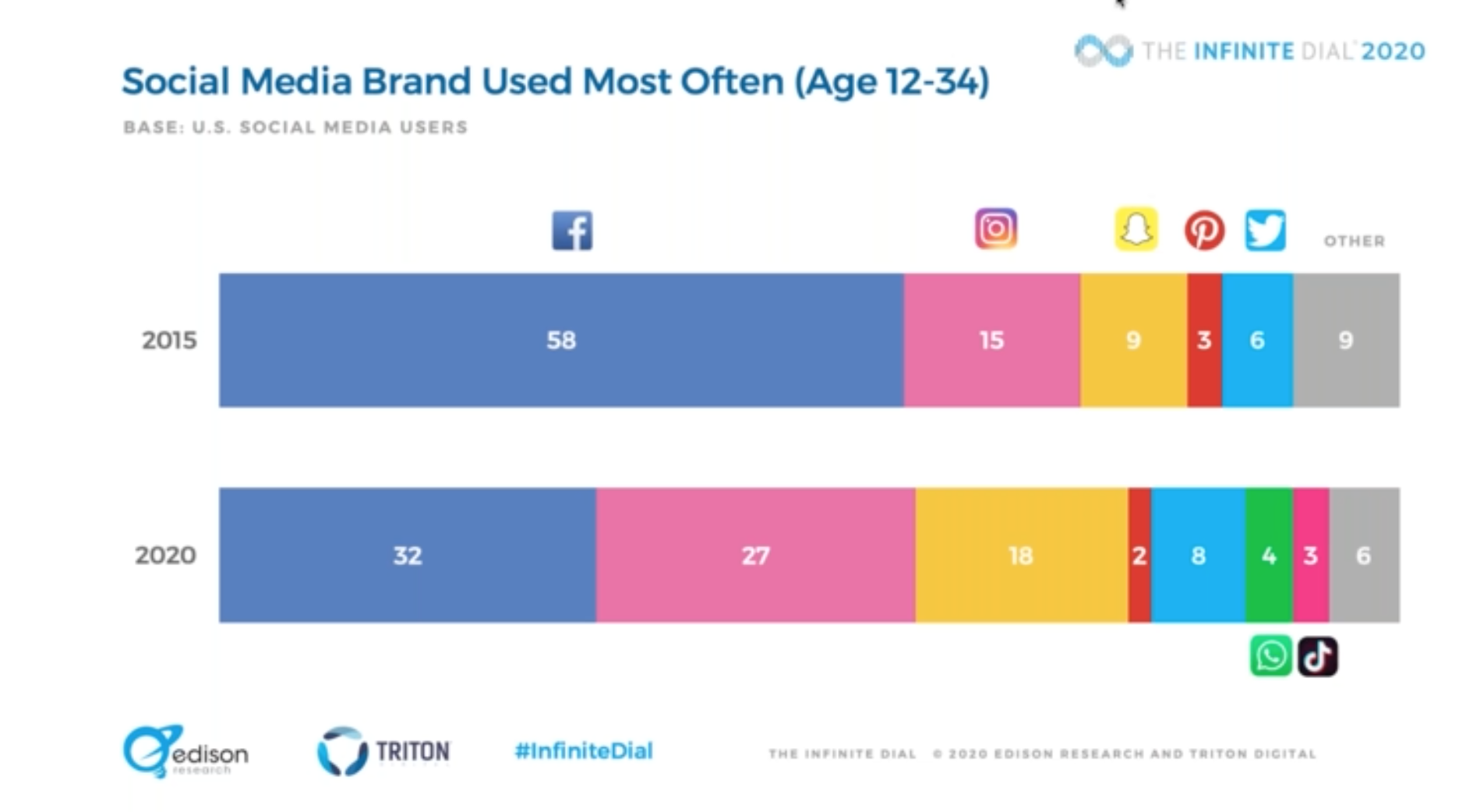