Streaming continued to grow in Canada in 2022, with on-demand audio streams hitting the 100 billion mark for the first time ever in a single year in late November and a +14% increase in total on-demand streaming consumption, according to Luminate’s 2022 Year-End Music Report.

The Canadian catalogue accounted for nearly 72% of listening share, with total album consumption up 15.8% from last year. By genre, Luminate found that country and rock listeners are more likely to tune AM/FM radio than those who listen to pop, r&b, and hip hop.

The company says this year’s annual compilation of data-driven insights is defined by the evolving mix of consumption habits as artists like Taylor Swift, Bad Bunny and Beyonce achieved successful album launches across both streaming and physical sales. New albums from those artists launched successfully on the Billboard Canadian Albums Chart during the week of their release, but each artist achieved that success through a different mix of consumption means.

For example, Bad Bunny earned 99% share of consumption via streaming alone for his album Un Verano Sin Ti year-to-date, but only 87% of the total consumption numbers for Beyoncé’s Renaissance were from streams year-to-date and only 71% of total consumption numbers for Taylor Swift’s Midnights were from streaming. Notably, Swift’s physical product sales accounted for nearly 23% of her numbers with multiple vinyl and CD offerings for fans. The album sold 575K vinyl albums in its first week in the U.S., breaking a record previously set by Harry Styles in May. Swift also achieved 1.58M equivalent albums upon the first seven days of release in the U.S., making it the biggest release week in seven years.

To gauge the success of a hit in this integrated environment, Luminate has introduced the “Global Hit Score” which adjusts the total consumption for a song by also accounting for in-country rank and weighted by each country’s market share. A song will get more points if it ranks highly in more countries, and even more points if those countries have a higher market share. The maximum score that a song can receive is 100, reserved for those that achieve #1 in every country in the selection. The closer the Global Hit Score is to 100, the more widespread the success of the song. 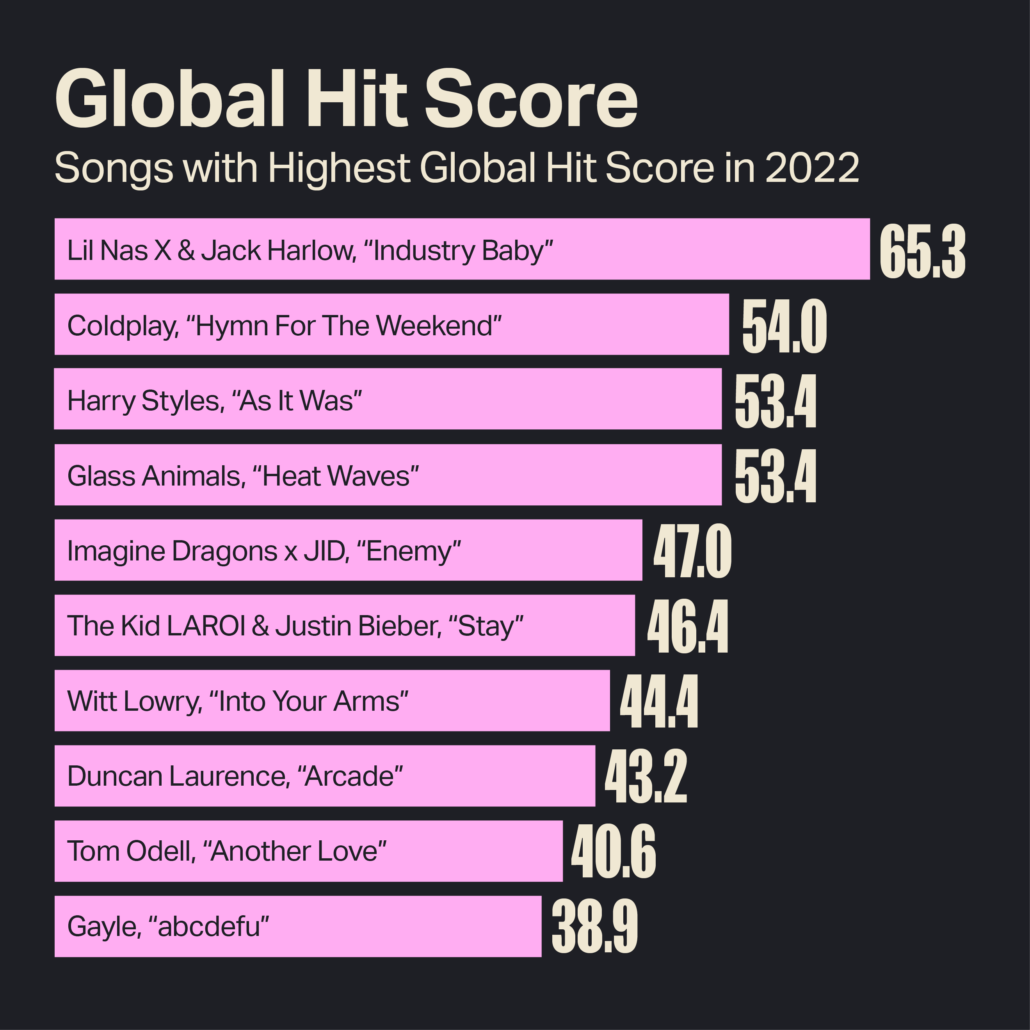