The popularity of ad-supported streaming continues to grow in Canada, according to Roku’s 2023 Video on Demand (VOD) Evolution study.

According to the streaming software and hardware manufacturer’s third annual dive into Canadian TV streaming behaviour and trends, three quarters of Canadians (76%) are now television streamers with 52% streaming ad-supported channels and services. 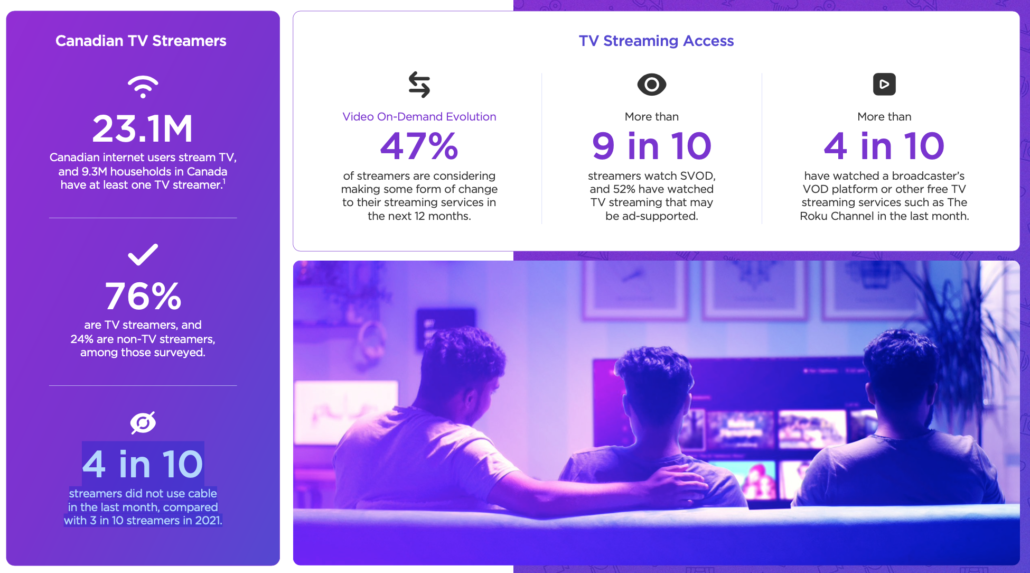 The Roku study found that the current macro-economic climate appears to be impacting Canadian TV households, with 18% planning to cancel or downgrade their cable or satellite package in the next 12 months, and 47% looking to make changes to the selection of streaming services they use. Roku says the “FlexiVOD” trend is being influenced by the fact that 57% of streamers feel they have less disposable income.

On average, streamers are watching just under 23 hours a week of TV content (or just over 25 hours if video platforms such as Twitch and YouTube are included). While the time spent watching streaming services has remained constant since the last study, at just under 10 hours a week with SVOD and five hours in total with BVOD (Broadcaster Video on Demand) and AVOD (Advertising-based Video On Demand) services, time spent with cable has fallen for streamers and non-streamers since 2021.

At the time of the research, four in 10 TV streamers had not used a cable service in the last month, an increase from three in 10 the previous year. The study noted strong generational differences with younger audiences less likely to watch cable (just 38% of those under-35), compared with 60% of streamers ages 35-54 and 82% of those 55+.

The average age of monthly TV streamers is 44 with 29% “Cord Nevers,” who have never paid for cable. After cutting the cord, about half (49%) of all streamers and 53% of Roku users felt that streaming was meeting all of their TV needs. Smart TVs are the number one streaming device with 75% of TV streamers owning a Smart TV, up from 72% in 2021. Desktop/laptop streaming was second at 52%, closely followed by mobile devices at 51%.

Among other viewing trend insights, the study found that 49% of Canadians are streaming live TV such as sporting and other special events on demand, up from 30% using VOD services to stream live TV in 2020. More streamers are also collectively watching programming with subtitles – 86% of anglophone streamers and 64% of francophone streamers.

When it comes to consumer preferences for TV advertising, nearly half (48%) of streamers under 35 say they prefer when the tone of a TV ad matches the program they’re watching. 47% say they’re more likely to pay attention to ads that reflect their mood.

The study is based on the results of an online survey of 2,001 Canadian adults, 18+, who use the internet and watched TV at least once in the last month. Fuse Insights conducted the survey between July and August 2022.