The Canadian Media Producers Association (CMPA) says it remains optimistic revisions to the Broadcasting Act will be introduced during the upcoming session of parliament, following Wednesday’s Speech from the Throne.

Included in the Liberal government’s outline of its upcoming priorities was a commitment to “address corporate tax avoidance by digital giants.”

“Web giants are taking Canadian’s money while imposing their own priorities,” read Governor General Julie Payette. “Things must change and will change. The Government will act to ensure their revenue is shared more fairly with our creators and media, and will also require them to contribute to the creation, production, and distribution of our stories, on screen, in lyrics, in music, and in writing.”

Earlier in the week, the CMPA was among a collective of film and television organizations that issued a joint statement imploring the government to keep a promise to overhaul the Broadcasting, Telecommunications and Copyright Acts.

“We’re pleased the federal government has reaffirmed its commitment to require foreign online companies contribute to the creation of Canadian content, and see this as an encouraging indication that revisions to the Broadcasting Act will be introduced in the upcoming legislative session,” the CMPA said, in a statement provided to Broadcast Dialogue. “We look forward to working with all parties to ensure contributions from streaming services create opportunities for Canadian producers to control and monetize their homegrown IP.”

The producer’s association also applauded the government’s commitment to extend COVID-19 support programs and to support the elevation of underrepresented voices within Canada’s cultural industries.

Campaigning had an impact: FRIENDS 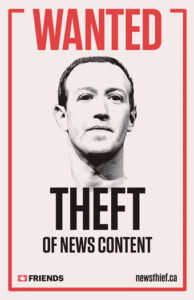 FRIENDS of Canadian Broadcasting, which has been running a national ad campaign that placed Facebook CEO Mark Zuckerberg on a WANTED poster, said in a statement to its supporters that the good news is that “campaigning to end Big Tech’s free ride has had an impact.”

“The commitment about requiring the likes of Netflix to finance Canadian stories is also very important. It reflects years of FRIENDS’ research and advocacy work – another sign that decision-makers are taking our priorities to heart,” said FRIENDS Executive Director Daniel Bernhard.

The advocacy group said it was less encouraged, however, by the absence of any mention of public broadcasting, local newspapers or broadcasters, impacted by sharp declines in advertising revenue.

Other government priorities for the upcoming session include accelerating connectivity and expanding the mandate of the Broadband Fund.

More details are promised later this fall on how government plans to implement the measures set out in today’s throne speech.