Roz Weston is set to step away from ET Canada after 17 seasons to focus on the upcoming launch of his memoir, A Little Bit Broken.

Weston is better-known as one half of the The Roz & Mocha Show, which originates on KiSS 92.5 (CKIS-FM) Toronto and airs in various dayparts on other KiSS-branded stations within the Rogers Sports & Media network, including Vancouver, Edmonton, Ottawa, and Winnipeg.

Weston has appeared on ET Canada, which airs on Global TV, since the entertainment magazine’s inception in 2005. He’ll film his final episode June 23, which Corus Entertainment says will include a special farewell.

“Seventeen years on one show is a rare and a ridiculous amount of time in this business,” said Weston, in a Corus announcement. “From Cannes and Moscow, to Egypt and Los Angeles, I’ve travelled around the world (probably twice) and got to interview every rock star and action hero I had a poster of on my wall when I was a kid. Shania Twain in Vegas, Brad Pitt in London, dirty dancing with Patrick Swayze and doing high leg kicks with Liza Minnelli – I’ve got a lifetime of stories.”

“Roz has been an invaluable part of the ET Canada team since the beginning,” added Lisa Godfrey, Senior Vice President of Original Content and Corus Studios. “His easy rapport with celebrities and his dedication to his craft is what makes him one of the best in the business. He will be missed!” 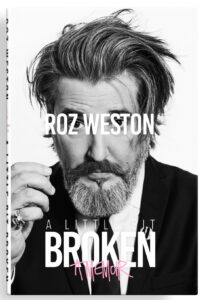 Weston announced his book deal with DoubleDay in April. The memoir will delve into the media personality’s life from interning for The Howard Stern Show to kicking an opioid addiction and recovering from bad choices. Available now for pre-order, it will come out Sept. 27.

“Two years ago, like everyone, I went into lockdown not knowing what to expect or who I’d be at the end of it all,” said Weston. “For sixteen months I channeled that uncertainty into creativity and wrote a book – my memoir, A Little Bit Broken. It will be released on September 27 and I’m as nervous as I am excited. I’m sad to be leaving my friends at ET Canada, but this project needs my full attention. I want to thank the audience for sharing your time with me on ET Canada and ET Canada Live. It has meant the world to me.”