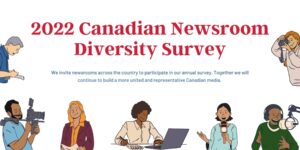 The Canadian Association of Journalists (CAJ) has announced the launch of the 2022 Canadian Newsroom Diversity Survey. The association’s inaugural diversity survey was published last year with 209 newsrooms sharing data for 3,873 journalists. It found that half of all newsrooms employ exclusively white journalists; that more than 8 in 10 newsroom supervisor roles are staffed by white journalists, and that while, overall, women outnumber men in newsrooms, they are largely over-represented in part-time and internship roles. Last year’s survey also revealed that eight in 10 outlets have no visible minority or Indigenous journalists in a top-three leadership position. This year’s survey is being sent to the editor-in-chief, or their equivalent, at radio, television, digital and print outlets across the country. If you are a newsroom leader that did not receive a copy, contact survey@caj.ca to receive one.