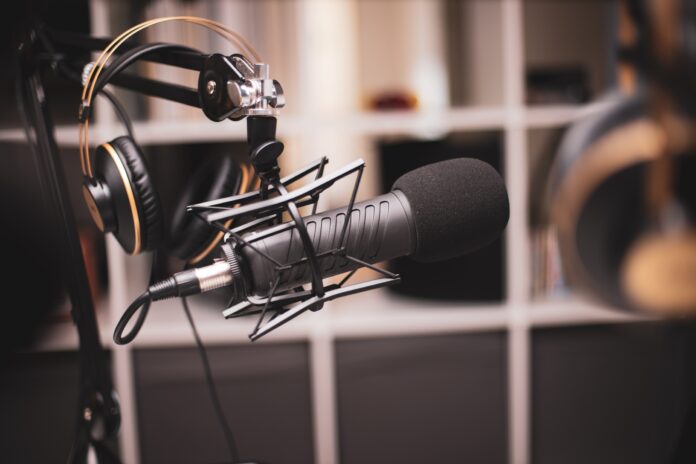 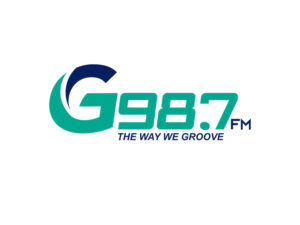 Neeti P. Ray, who owns CINA-FM Windsor and CINA 1650 AM Mississauga, among other multicultural stations, is the successful bidder for Toronto’s G98.7 (CKFG-FM), pending CRTC approval. Until that happens, Intercity Broadcasting Network (IBN) will continue to manage and operate the station, under the supervision of the receiver. In the meantime, Ray has put up $250,000 in interim financing. As outlined in a court filing by A. Farber & Partners, the winning bid includes a written commitment to continue to operate the station “in a manner consistent with the mandate to serve the Caribbean and African communities of Toronto with its spoken word and music format.” According to the documents, A. Farber & Partners received and reviewed 14 non-binding letters of intent, 11 of which were invited to submit binding offers on the station. Despite a petition to keep the station Black-owned and numerous letters of support, the court filing reveals that no bids from Black-owned groups were submitted. Read more here.

The CRTC has approved a one-year extension for Manitoba-based CJ Radio to launch its low-power station in Esterhazy, SK. In his application, General Manager Bill Gade said the installation process has been greatly affected by COVID-19 related delays. The commission has set a new launch deadline of Nov. 21, 2021. 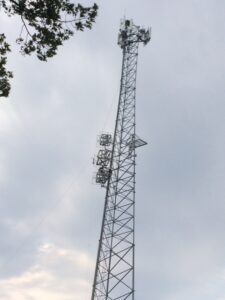 Torres Media Group says it’s still waiting on ISED approval to launch K Country 93.7 FM, its new station in Georgina, ON. President and CEO Ed Torres tells Broadcast Dialogue that he’s hopeful the station, which was originally set to go to air over the Labour Day weekend, will be able to launch the week of Oct. 26. He says staff and equipment are ready to go as soon as the regional inspector signs off. “It’s a very frustrating situation, considering all of the delays and added expense of building a new station during this pandemic,” said Torres, in an email. “So we are ready to go when ISED decides to send an inspector.”

Blake Carter and Peter Kash are back in mornings on Toronto’s Flow 93.5 (CFXJ-FM) as of Wednesday. The station has said goodbye to syndicated New York City-based morning show The Breakfast Club, which started its run on Flow in mid-May after its initial March launch date was delayed due to COVID-19. Steve Parsons, General Manager, Toronto, and National Director of Programming for Stingray, told Broadcast Dialogue that on day one of the local duo’s return to mornings, the station saw a 33% increase in streams. Parsons says the station’s timing around The Breakfast Club was “thwarted by a perfect storm” starting with the pandemic and most recently the American election. “It was pretty self-evident that the show was speaking to a different country’s priorities,” acknowledged Parsons. Read more here.

Stingray has launched an initiative to support emerging Canadian talent on 19 of its country radio stations which have introduced “The Trending Track” into rotation. Every other month the Stingray country team will select a track by an emerging artist to feature. The chosen song will receive two months of support and a minimum of 25 spins per week on the participating stations. The Trending Track artist will also have the opportunity to do an interview with Paul McGuire for his National Midday and Countdown Shows and receive additional support on station social media and websites. Emerging Canadian artists, who qualify under the CRTC MAPL criteria, and those who have not had a song chart or haven’t charted on the Canadian Top 50 in the last 18 months, qualify.

Q104 (CFRQ-FM) Halifax wrapped up its annual Thanksgiv’er for Feed Nova Scotia on the weekend realizing its most successful event to date raising over $84,000. Funds raised will assist more than 10,000 Nova Scotia families with food security concerns. Q104 along with its partners, The Cherubini Group, Sobeys, Pete’s Frootique & Fine Foods and O’Regan’s Auto Group, combined forces for three days over the Thanksgiving weekend broadcast. 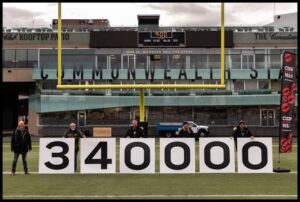 CISN Country 103.9 and Global Edmonton raised $340,000 in support of Hope MIssion during the CISN in the Morning team’s 28-hour broadcast from The Brick Field at Commonwealth Stadium. Starting Oct. 7 at one end zone of the football field, the live broadcast moved one yard for every thousand dollars donated. Hosts Chris, Jack & Matt, continued to move up the field, travelling well beyond their goal of 110 yards and reaching the other end zone three times by 9 a.m. on Oct. 8. 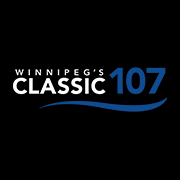 The Change Happens Radiothon, heard on Golden West Broadcasting’s Classic 107 (CKCL-FM) Winnipeg, raised $260,000 in support of Siloam Mission over the first time, three-day event. Just as Classic 107 staff were preparing to head home on Oct. 6, the already impressive total was buoyed by a last minute, single donation from an anonymous family of $130,000. 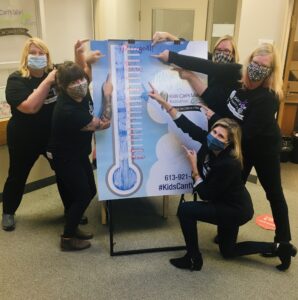 Quinte Broadcasting and Starboard Communications collaborated on the first annual Kids Can’t Wait Radiothon Oct. 7, raising over $72,000. The radiothon supports the work of The Children’s Foundation, which provides programs and services for kids in Hastings, Prince Edward, and Northumberland counties. 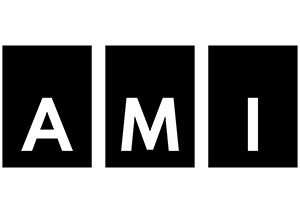 AMI (Accessible Media Inc.) has announced the launch of six new original podcasts: The Blind Reality (Oct. 13), is hosted by community reporter Becki Zerr, who shares her unique experience living with monocular vision, no vision at all, and various degrees of partial sight. Accessing Art with Amy (Oct. 15), hosted by Amy Amantea, is a bi-weekly podcast that looks at a variety of art forms through the lens of disability. A Yogi’s Guide to Health and Wellness (Oct. 20) features host Kevin Naidoo and other wellness experts discussing nutrition, yoga, mindfulness, and meditation. Low Vision Moments (Oct. 29) with Jennie Bovard, explores the funny, potentially embarrassing experiences that happen in everyday life when you are blind or partially sighted. Tales from the Halifax School for the Blind (Nov. 3), inspired by the book Mrs. Beaton’s Question by Robert Mercer, shares the experiences of alumni hosted by musician Terry Kelly. Into You (Nov. 5), is a look at dating and relationships hosted by Fern Lulham. The new podcasts join AMI-audio’s NOW with Dave Brown, Kelly and Company, The Pulse and Double Tap Canada. 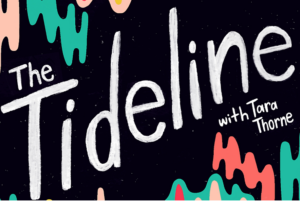 The Halifax Examiner is producing new entertainment podcast, The Tideline with Tara Thorne, premiering Oct.15, with new episodes dropping every Thursday. Up until her release from CBC Halifax in August, Thorne was a longtime contributor to Information Morning and a former arts columnist for The Coast. She’s also currently in pre-production on her first feature film, Compulsus, which is part of the 2020-21 Telefilm Talent to Watch program. 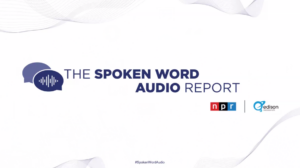 Edison Research and NPR have released their second annual Spoken Word Audio Report looking at the spoken word audio listening habits of Americans. It shows that the ability to multitask while listening, a desire for personal growth, and the pandemic, among other motivators, have boosted spoken word audio consumption by eight per cent over the last year. Among the study’s insights are a glimpse into listeners’ perception of spoken word audio, with 65% agreeing it’s a productive use of time. The study also explores reasons behind the decline in music’s share of audio listening which has dropped eight per cent since 2014 when music accounted for 80% of all time spent with audio. Spoken word has been chipping away at that lead and now accounts for 26% of all audio listening. AM/FM Radio (talk, news, sportstalk, play-by-play) has fallen from 79% of all spoken word listening in 2014 to 55% in 2020 (both over-the-air and streams). Podcasts have grown to 19% of that listening, up from eight per cent in 2014. Read more here. 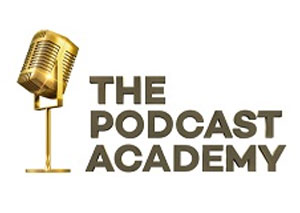 The Podcast Academy has announced The Ambies, annual awards celebrating excellence in podcasting. The Ambies cover 24 categories, encompassing Show Recognition Awards, presented to the creator or producer of the respective podcasts (an individual, or a company), and Talent Recognition Awards presented to individuals or teams, to recognize excellence. Production companies, individual producers/creators, and distributors of a podcast series which published at least three episodes from Jan. 1, 2020, to Dec. 31, 2020 are eligible for consideration. Nominations are being accepted from Oct. 19 – Dec. 15 with the winners to be announced at a ceremony in March.