Unifor welcomes the 26 workers at CKWX-Vancouver (CityNews 1130 radio), which the #CIRB awarded certification this week! Thank you for joining us and we’re excited to fight for your rights as media workers.#savelocalnews pic.twitter.com/GMAbvHwc5G

CityNews 1130 (CKWX-AM) Vancouver employees have unionized. Unifor Local 830-M will be overseeing workers at the Rogers station with the certification covering positions like the Legislative Reporter, Producers, and Anchors with talent agreements. The bargaining committee has been elected with Unifor’s National Representative Mark Cameron and Local 830-M President Tanya Luciani prepping for bargaining. CityNews television workers were already unionized under Unifor. “This is a big victory for radio workers in Canada,” Unifor Media Director Randy Kitt told Broadcast Dialogue in an emailed statement. “Workers in the media sector see that collective bargaining is the answer to better work/life balance, fighting inflation and better working conditions. We look forward to fighting in their corner as they go into bargaining for their first contract.”

Radio Connects says AM/FM radio streaming is growing, according to the latest Radio On The Move 2022 data. It indicates that since 2020, streaming AM/FM via a digital device has increased by 6% to represent almost 15% of tuning by Canadians, 18+, with the use of smart speakers fuelling that growth. The report says streaming of AM/FM Radio continues to grow and is on equal footing with ad-supported Spotify. Signal Hill Insights has been releasing early results from The Canadian Podcast Listener 2022, which indicate gains in podcast listening during the pandemic are holding. After showing incremental growth between 2017 and 2020 in its annual survey of more than 3,000 Canadian adults, Signal Hill says podcast listening shifted to a higher gear from the first year of the pandemic (2020) to the second year (2021). Canadians who say they ‘ever listened’ to a podcast shot up four points from 44 to 48%. That was followed this year by a five point increase, with more than half of Canadian adults (53%) now saying they have listened to a podcast. On the heels of increased sampling of podcasts from 2020 to 2021, regular listening climbed sharply from 2021 to 2022, with monthly, weekly and daily listening each posting the highest year-over-year growth since they started tracking in 2017. 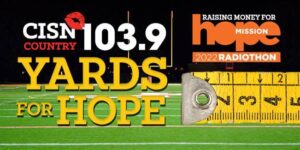 Corus Entertainment’s CISN Country 103.9 Edmonton will broadcast, Yards for Hope, its annual Radiothon in support of Hope Mission, an organization helping the hungry and homeless. Over the last six years, the Yards for Hope broadcast has raised over $1.8 million. Kicking off Oct. 6 at 6 a.m., the award-winning CISN In The Mornings with Chris, Jack and Matt, will march down the Brick Field at Commonwealth Stadium. Starting at one end zone of the football field, the morning team will broadcast LIVE from the field and move one yard for every thousand dollars donated. They’ll continue to move up the field, aiming to travel 110 yards and reach the other end zone by 9 a.m. on Oct. 7 – a total of 27 hours on-air. To donate, listeners can call Hope Mission at 1-855-836-HOPE (4673) or go online at Hope Mission Radiothon.

LISTEN: Broadcast Dialogue publisher Shawn Smith is on the latest Sound Off Podcast talking about continuing the legacy of Canada’s broadcast publication of record, his recent acquisition of CARTT.ca and the Canadian Radio Awards. Listen on your favourite podcast app or here: