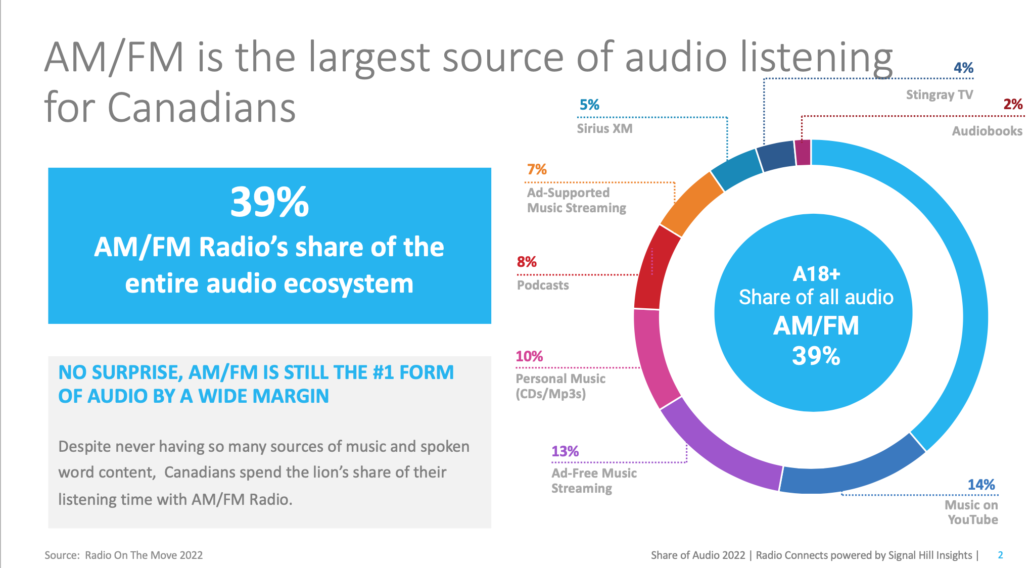 Radio Connects’ 2022 Share of Audio Report finds Canadians are still spending the bulk of their time with AM/FM radio above other audio platforms. Based on survey data compiled by Signal Hill Insights between March and April of this year, and containing highlights from this year’s Radio on the Move, Share of Audio found that radio accounts for 39% of Canadian audio listening (down from 44% in 2021), followed by YouTube Music (flat year-over-year at 14%), ad-free music streaming (13%, up from 9% last year), and personal music like CDs or mp3s (10%, down from 11% in 2021). In-car, AM/FM continues to dominate, accounting for 59% of listening time among those 18+. Read more here.

My Broadcasting Corporation (MBC) has announced that it’s reached an agreement to  acquire GIANT FM (CIXL-FM) and Country 89 (CKYY-FM) Welland, ON from Wellport Broadcasting/RB Communications. Financial terms of the transaction, which is pending CRTC approval, have not been disclosed. Stingray previously announced in 2019 that it intended to purchase both stations, however the sale fell through. With the addition of the Welland stations, the MBC group would grow to 18 FM stations and 14 local news sites across small and mid-sized markets in Ontario. Read more here. 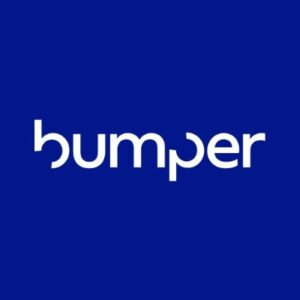 Dan Misener and Jonas Woost have announced new venture, Bumper, a podcast growth agency to help organizations maximize their return on audio portfolios. Misener and Woost both departed Rogers Sports & Media-owned branded podcast studio Pacific Content in July. Bumper is being founded on the idea that as the podcast ecosystem matures, brands need specialized help to create and execute audience growth strategies in the increasingly crowded podcast space. The startup’s services include podcast audience development, marketing and promotions, and customized measurement solutions. Bumper will be attending Podcast Movement 2022, Aug. 23-26, in Dallas, where Misener will present a session on the power of “podcast neighbourhoods” and how podcasters can use them to discover, target, and reach new audiences. Read more here. 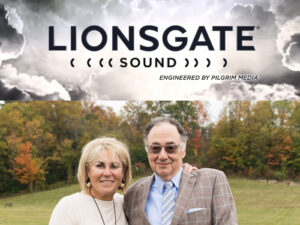 Lionsgate is entering the podcasting space with new division Lionsgate Sound that will launch with four shows, including true-crime thriller “The Lives and Deaths of Barry and Honey Sherman” for the CBC. The division will operate as a full-service podcast production company for the studio’s film & television businesses, in addition to third party clients. Lionsgate company Pilgrim Media Group, headed by Emmy-winning producer and unscripted television veteran Craig Piligian, is a minority owner in Lionsgate Sound and will handle day-to-day operations. Read more here. JAZZ.FM91 (CJRT-FM) Toronto has declared Monday, Aug. 15 as Oscar Peterson Day, marking the late musician, composer and Canadian ambassador’s birthday. To celebrate the day, JAZZ.FM91 will air special programming and a live-to-air concert performance from 7 to 8 p.m. ET, featuring JUNO Award-winning pianist and composer Robi Botos and bassist, composer and Order of Canada recipient Dave Young in a duo performance. The evening will be hosted by Céline Peterson, Oscar’s daughter and host of No, I Do Not Play Piano every Saturday morning on JAZZ.FM91.

ACTRA Toronto has released the findings of a first-of-its kind survey that finds video game voice work is impacting the vocal health of performers. Undertaken in June of last year, 260 ACTRA members participated in the survey. Almost three-quarters (74%) of voice actors polled said that “very often or almost always” their sessions included loud/projected, aggressive, or vocally extreme work. Nearly 40% said they “very often or almost always experience” vocal fatigue or stress during the voiceover session. Another 20% reported finding it frequently hard to recover vocally after a video game voiceover session, with 42% saying it took two or more days for their vocal quality to return to “normal” after a vocally extreme session. Over 27% of those polled had thought about turning down a session for fear of the impact it would have on their voice, or the work it would cause them to lose. Read more here.

MOVE 103.5 (CHQM-FM) Vancouver personality and rock historian John Beaudin has reached a milestone 100,000 subscribers to his YouTube channel, Rock History Music. The radio veteran started the channel in 2016, initially set up to share interviews from 40 years in radio, including conversations with classic rockers like Jon Anderson (Yes), Randy Meisner/Bernie Leadon (Eagles), Lou Gramm (Foreigner), Dennis DeYoung (Styx), Barry Goudreau/Jim Masdea (Boston), and others. Beaudin, who currently hosts the evening show on MOVE 103.5, also recently started new channel, Rock History Canada, that will host a new series on the history of Canadian music. Beaudin previously hosted syndicated radio show “The Cross Canada Report” which was heard on 47 stations across the country in the 1980s.

LISTEN: Broadcast Dialogue caught up with John Leschinski, Chair of Podcamp Toronto, which is behind the Canadian Podcast Awards. On this episode of the podcast, we talk about some of this year’s nominees, the future of Podcamp TO, and more. Listen on your favourite podcast app or here:

LISTEN: Ari Daniel, former evening host at Virgin Radio 94.5 (CFBT-FM) Vancouver, is on the latest Sound Off Podcast. Also an alum of Sun FM 99.9 (CHSU-FM) Kelowna and boom 97.3 (CHBM-FM) Toronto, among other stations, Daniel is the host of the Addicts in the Dark, a one-hour podcast, featuring one anonymous caller and story about addiction. Listen on your favourite podcast app or here: