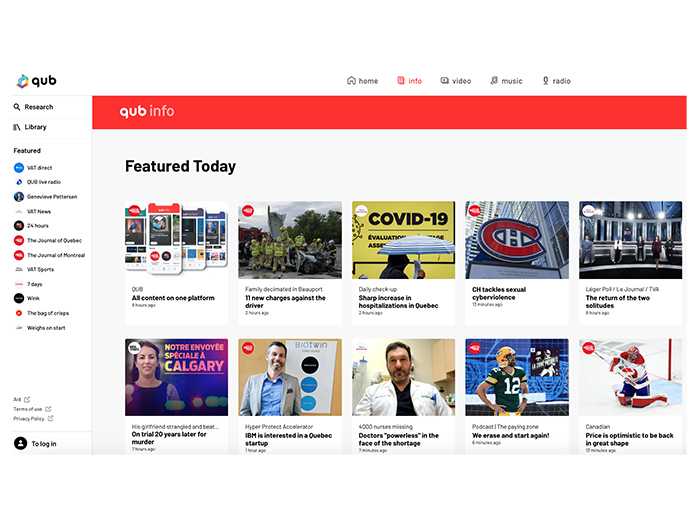 Quebecor has unveiled QUB, a new platform that brings content from Quebecor’s news and entertainment brands together in one place.

The vast majority of the content is free, with the exception of recently-launched subscription streaming service, Vrai, dedicated to exclusive unscripted specialty content. Among QUB’s user features is the ability to personalize content with a customizable feed according to interest.

“Our teams have been working on the QUB platform for more than three years,” said Mathieu Turbide, Vice President, Digital Content at Quebecor, in a company announcement. “It’s been a massive undertaking. We have developed the technology that powers the huge QUB platform ourselves. When the TVA +, QUB musique, QUB radio and, most recently, Vrai platforms were created, the plan was to bring them together under one roof eventually. QUB is the flagship for our digital content, the concrete expression of an overarching 360° strategic vision in which the vast majority of our content is connected via a user-friendly, modern, accessible interface, and where users will find a selection of content that is unmatched in the Québec market. In fact, we believe we are among the first media groups in the world to offer so much content in all digital formats – including news, entertainment, video, radio, podcasts, music and more – in one place. And this is just the beginning.”

“Quebecor has always been able to anticipate market demand,” added Pierre Karl Péladeau, President and Chief Executive Officer of Quebecor. “With the launch of QUB, we are again demonstrating our ability to innovate in order to put Québec content front and centre. In the fiercely competitive media and entertainment industry, Quebecor’s greatest strength is its content. It’s what sets us apart from the major local and international players. It’s also a unique way to connect with audiences. Our content keeps the revenues generated by news and entertainment in Québec and helps keep our industries competitive,”