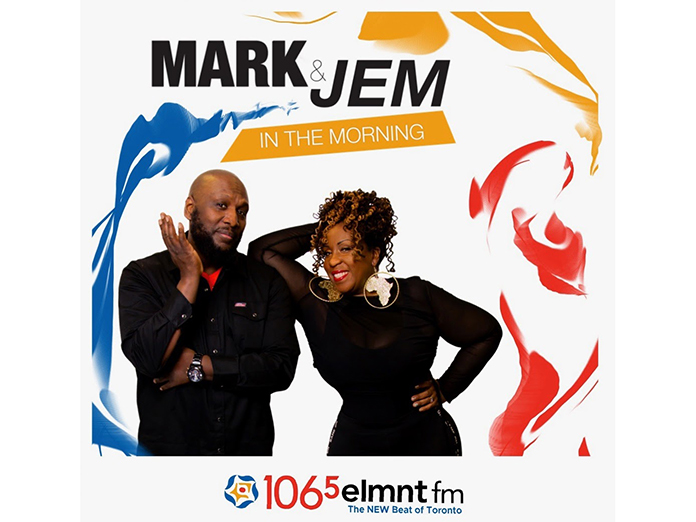 Mark Strong and Jemeni have returned to Toronto airwaves after a three-month absence following their departure from G98.7 (CKFG-FM). The longtime radio duo join Indigenous radio station 106.5 ELMNT FM (CFPT-FM) as Mark and Jem in the Morning, heard weekdays from 6 – 10 a.m.

“Mark and Jem have been a beloved duo of Toronto residents for years. We are proud to have them as part of the 106.5 ELMNT FM team. 106.5 ELMNT FM understands the importance of showcasing Toronto’s rich diversity,” said Andrew Johnson, Station Manager, who prior to joining ELMNT FM in 2018, worked with the duo as Production Manager at G98.7.

Having previously helmed the G98.7 morning show together since 2011, Strong initially got his start in radio as part of The Morning Rush on Flow 93.5 (CFXJ-FM) Toronto in 2001. Jemeni, who is also a poet, actress and music journalist, has been in radio since her teens, initially as part of Hip Hop show The Powermove on Toronto community station CKLN-FM.

Credited with helping break emerging artists over the years and giving a voice to the Black community, ELMNT FM says the duo stand “in continued allyship” with Indigenous people, while maintaining a longstanding commitment and history of using their platform to elevate the stories and voices of marginalized communities.

“I’ve had the privilege of working with some incredible talent in my career, and I’m thrilled to finally be producing for Mark and Jem. As a Toronto hip hop artist myself, I know the doors those two have opened for so many others; they’ve truly paved a way for aspiring talent — especially of colour,” added Haq.

The new morning show is the station’s third since its launch in 2018, which was initially helmed by Bob Magee, an alum of CHFI and CHUM. Since Magee’s departure from the station in Jan. 2021, First Peoples Radio Creative Director Jonathan Shaw has been hosting, in addition to his other duties. Sister station 95.7 ELMNT FM (CKPO-FM) Ottawa retains its own morning show, Wake Up Ottawa! hosted by Aiden Wolf and Jay Harrington.

ELMNT FM is operated by First Peoples Radio under the guise of independent holding company, Dadan Sivunivut, established by APTN’s Board of Directors in late 2019, a for-profit corporation that gathers all of the APTN subsidiaries established over the last 12 years under a new umbrella, headquartered in Ottawa, and encompassing the AnimikiSee companies, First Peoples Radio, All Nations Network (ANN), Nagamo, and Red Music Rising.