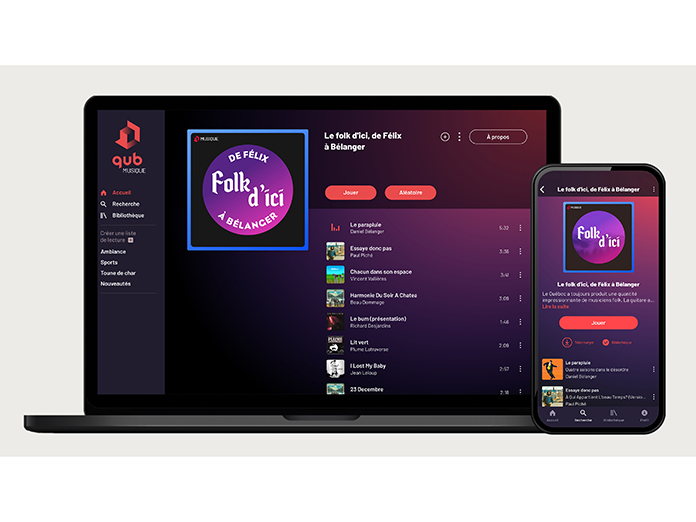 Available for both mobile and desktop, the QUB musique app is launching with a catalogue of 50 million songs available on demand, in addition to hundreds of playlists created by “local curators who understand Quebecers’ needs and tastes.”

“Faced with large international streaming platforms, Quebecor wanted to offer Quebecers a local product which offers an unparalleled showcase for local talent and does its part to improve artist and music rights holders’ remuneration,” said Pierre Karl Péladeau, Quebecor President and CEO, in a release. “In this time of crisis, supporting our local artists is more important than ever, and what better way is there to do that than listening to local music? This is why we decided to move up the launch of QUB musique, so that audiences could discover and enjoy the richness of the Quebec repertoire.”

Mathieu Turbide, Quebecor Vice-President, Digital Content, said the platform was designed in consultation with associations, distributors, record labels, artists and music fans. It promises better compensation for artists than other platforms, a much maligned aspect of the rise of music streaming, although what that number is hasn’t been revealed. Spotify has historically paid on average between $0.006 and $0.0084 per spin, however that amount still needs to be split with the artist’s record label, among others.

Turbide said the amount paid to artists and rights holders will be calculated as a percentage of the revenues QUB musique generates.

“We cannot disclose the exact amount of percentage, but it is similar to all the other services since it is negotiated with the same distributors and collecting societies. Those percentages are not decided unilaterally by the streaming services,” said Turbide, who added that the price of the streaming service at $11.99 a month is 20% higher than most other services available in Canada. Accordingly, he said that should equate to 20% more income to share with rights holders.

“We give a better exposure to Quebec and Canadian music in our service through our playlists, positioning on our homepage, sections, new releases. So, this will generate more listening for our local artists, thus more revenues for them,” added Turbide, who said in consultation with Quebec music organizations, the platform is looking at ways to generate more revenue for creators.

“We are betting that Quebecers are ready to do their part so that players in the music industry are better paid. As for us, we are committed to continuing to invest and work to make QUB musique a true ally of Quebec music,” said Turbide.

QUB musique is being offered on free trial until July 31. Beginning Aug. 1, it will be available for $11.99 a month or for $4.99 a month to Videotron mobile phone customers. Turbide clarified that the discount for Videotron customers won’t affect QUB’s royalties model, which will be based on the higher subscription fee across the board.

The launch of QUB musique is an expansion of the QUB brand which first launched in the fall of 2018 with QUB radio. QUB radio features shows from Quebec media personalities like Mario Dumont, Benoit Dutrizac, Richard Martineau and Sophie Durocher, as well as original podcasts.