JVC Professional Video will introduce its CONNECTED CAM Studio 6000S compact live production and streaming studio next week at the 2019 NAB Show (Booth C4415) in Las Vegas. Designed for sports and other live events, the self-contained control room features a production switcher with six IP inputs that support NDI as well as the SRT (Secure Reliable Transport) streaming protocols. While designed to maximize IP workflows, the Studio 6000S inputs also support HD-SDI and HDMI sources. Other integrated features include an audio mixer, internal CG with templates, four layers of DSK, and clip store with playback. Features specific for live sports production include automated multi-channel instant replay and slo-mo, as well as an integrated sports CG for scores and timers. With a built-in H.264 encoder, the Studio 6000S supports up to 1080p streaming at up to 10 Mbps, with RTMP and MPEG-TS simultaneous output and direct streaming integration to Facebook Live and other CDNs. The CONNECTED CAM Studio 6000S (KM-IP600) has an MSRP of $13,000 (USD) and will be available in June. Vinten, a leader in manual and robotic camera support systems, has introduced its new FH-155 robotic/manual pan-and-tilt head designed to support heavy payloads in modern broadcast studio settings. With a maximum payload capacity of 70 kilograms (155 pounds), the FH-155 combines software and mechanical engineering to enable accurate, smooth, and quiet movements. In addition, the FH-155 is the industry’s first pan-and-tilt head with an option for a fully integrated StarTracker module, offering an absolute-reference tracking system for floor-roaming pedestal combinations. With StarTracker, broadcasters can calibrate multiple studios and move equipment between them as needed without additional calibration — saving time and improving efficiency in busy, multifunctional facilities. The FH-155 and FHR-155 will be available from May. The heads will be shown alongside Vinten’s full line of creative robotic solutions at the 2019 NAB Show in the Vitec Group booth, C5725. Rohde & Schwarz will present a solution for the future transmission of media content with 5G Broadcast at NAB 2019. Broadcasters will be able to reach smartphone users directly using a high-power high-tower (HPHT) network topology as an overlay for mobile networks. As a part of Bavarian research project ‘5G TODAY’, Rohde & Schwarz is investigating large-scale TV broadcasts over an HPHT 5G Broadcast field trial near Munich. The project is also supported by Kathrein, Telefónica Germany and Bayerischer Rundfunk. The company will highlight the advantages of this emerging technology at the Rohde & Schwarz booth and demonstrate the first end-to-end solution for LTE/5G Broadcast. The 5G Broadcast experts will speak at the Broadcast Engineering and Information Technology (BEIT) conference on Tuesday, Apr. 9 at 9 a.m. The IP Showcase, now in its third year at the NAB Show, will feature a new Future Zone demonstration area to highlight the latest advances in the standards-based approach to IP-based operation in broadcast. Following the industry’s general acceptance of SMPTE ST 2110 as the transport layer for IP systems, the Joint Task Force on Networked Media (JT-NM) is in the process of defining and releasing the JT-NM Tech Stack, a set of protocols that will make it easier for broadcasters to implement IP-based systems. Those developments will be demonstrated for the first time in the Future Zone. More info here. Anton/Bauer has introduced Titon, a new series of Gold Mount and V-Mount batteries designed for on-location productions. Offered in both 90Wh and 150Wh models, Titon powers the leading DSLR, mirrorless, ENG, and digital cine cameras as well as LED panels — including Litepanels’ new Gemini 1X1 Soft RGBWW light. With P-TAP and high-speed Smart USB ports, Titon can also power accessories such as wireless transmitters, follow focus and lens controllers, monitors, and smart devices. Titon offers one of the widest operating temperature ranges in its class — from -4 °F to 140 °F (-20 °C to 60 °C). Titon is available now and will be on display for the first time at the 2019 NAB Show in the Vitec Group booth. Cloudfirst.io, a Toronto-based innovator in next-generation digital archive transformation, and Signiant, a leader in intelligent file transfer, have announced a new partnership that integrates Cloudfirst.io’s Rapid Migrate legacy archive migration solution with Signiant’s patented acceleration technology and SaaS platform. The combined solution is aimed at making it easier for media companies to accelerate and modernize their archives as they move off legacy technology to leverage modern multi-cloud environments. Rapid Migrate is a high-performance SaaS-based orchestration tool which automates massive-scale migration off legacy archive and storage management platforms to next-gen solutions that include on-premises, cloud and hybrid storage. Signiant will be showcasing the solution at NAB 2019. International Datacasting, a subsidiary of Winnipeg-based Novra Group, will launch a new version of the Novra S400Pro satellite receiver integrating Broadpeak® nanoCDN™ technology. The new product is geared at helping pay TV operators and others implement ABR (adaptive bitrate) formats, such as HLS or DASH, leveraging their existing network equipment for scalable, low-latency delivery of live streaming video. The S400Pro and nanoCDN™ will be on display at the NAB show. International Datacasting/Novra Group will be in South Hall, booth SU3621, Broadpeak in Booth SU9221. PromoSuite and WideOrbit have announced a new integration that promises to improve the speed of on-air contesting and liners in the studio. The new PromoSuite Next widget for WO Automation for Radio enables on-air talent to submit PromoSuite Next winner sheets, check winner eligibility, and log live liner and contest reads directly from the WideOrbit Automation for Radio interface, rather than toggling between the two systems. Representatives from both companies will be attending the NAB Show in Las Vegas. 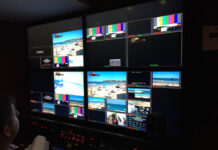