Adrienne Pan, the host of CBC Edmonton afternoon drive program Radio Active, has passed away after being hospitalized with a serious illness. She was 43.

Pan, who grew up in Edmonton and attended high school at the Victoria School of the Arts where her interest in broadcast journalism was first piqued, passed away Saturday morning. After graduating from McGill University with a B.A. in Communications and Political Science, she started her broadcasting career in 2001 at A-Channel in Edmonton as a writer and associate producer. In Nov. 2002, she joined Global News, first in Lethbridge as a video journalist and producer, and then in Winnipeg as an anchor and reporter. Her work on a documentary about inner-city Winnipeg community activist Harry Lehotsky, “Saving Grace: The Harry Lehotsky Story”, was recognized with both National and Regional RTDNA awards in 2007. 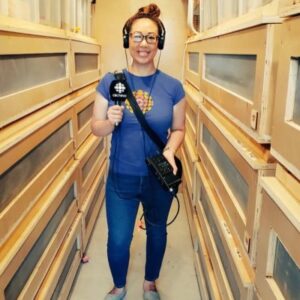 After nearly five years at Global Winnipeg, Pan joined CBC Winnipeg, initially as a lifestyle reporter contributing to Living Winnipeg. She went on to host CBC Manitoba Late Night for two years, before returning to her hometown and CBC Edmonton in 2011.

She was a host and producer on the late night and 6 p.m. newscast for seven years, and a fill-in host on radio, before moving into radio full-time in 2018 as the host of Radio Active.

That same year, Pan also produced radio doc, The Pipeliner Wives Club, based in part on her own experience being married to a pipeliner. She’s survived by her husband Ben Norman, and her parents, among other extended family members.

I will miss @Adrienne_Pan immensely. The energy and smile were infectious. pic.twitter.com/7UWZPeIFrq

I sit at Adrienne’s old desk. May her memory be a blessing. https://t.co/fIVzEVC5Jy

Through tears, I was looking at tweets from @Adrienne_Pan and I laughed when I saw her defending Fast and the Furious for its family message (which sincerely meant everything to her). She was Radio Active’s Dominic Toretto and it’s still hard to imagine going on without her. https://t.co/Txg1Dc9rAX

It takes a lot to trend above weather in Edmonton.

And that speaks to Adrienne Pan, whose kindness and dedication shone through on both TV and radio.

Our city is lesser with her loss. #Yeg pic.twitter.com/n5QTj4uIri

A strong critical thinker with a big heart, Adrienne Pan could both hold powerful people accountable and tell personal or emotional stories with sensitivity and care. She also loved exploring Edmonton restaurants. https://t.co/MPIF6Pn5ox