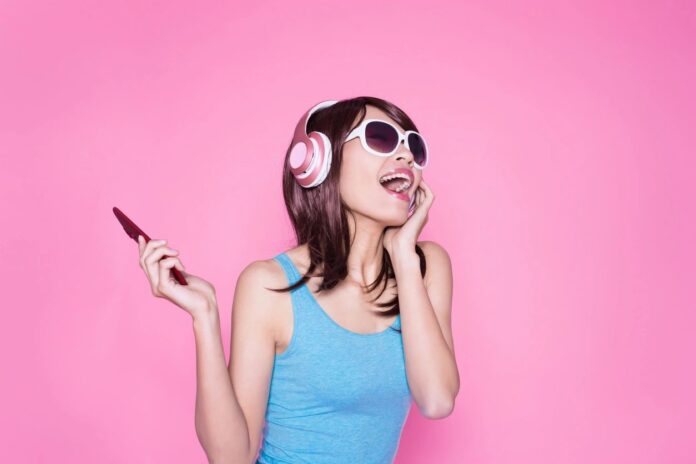 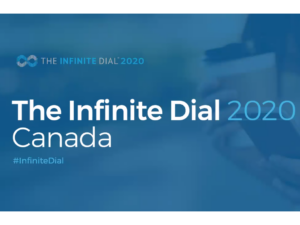 Monthly and weekly online audio demand in Canada now surpasses that of the U.S., 18+, according to Infinite Dial Canada.

The third Canadian edition of Infinite Dial, which mirrors the longest-running study of consumer media behaviour in the U.S., was released Thursday by Edison Research and Triton Digital.

Tom Webster, Senior Vice-President, of Edison Research, says the introduction of unlimited data plans by Canada’s top three mobile carriers has had a significant impact on the growth of online data consumption.

“There was pent up demand and we’ve now seen that realized as people are less anxious about using up their data plans,” said Webster.

Data for this year’s survey was collected in the first quarter of this year and does not reflect current consumer media trends in quarantine. It was gathered using a national telephone survey of 1,076 Canadians, 18+, reached via both mobile and landline, and conducted in both English and French (36%). While the U.S. Infinite Dial survey reflects 12+, country to country comparisons have been weighted, 18+.

Among Infinite Dial Canada’s findings are that Canada is leading monthly audio online listening with 70% of Canadians saying they had streamed audio in the past month, whether it be a podcast, music, or radio station. That compares to 67% of Americans, with Canada also leading Australia, South Africa and Germany.

The study indicates that streaming audio is becoming more habitual for Canadians with 60% saying they had listened to online audio in the last week, compared to 58% of Americans.

The number of Canadians owning a smart speaker was flat year over year at 26%, slightly higher than 24% of U.S. respondents.

Stephanie Donovan, SVP, Publisher Development, Triton Digital Canada, said smart speakers are bringing audio back into the home, including extending time with broadcast or online radio brands. She added that while habits are shifting, brand loyalty is staying with radio. 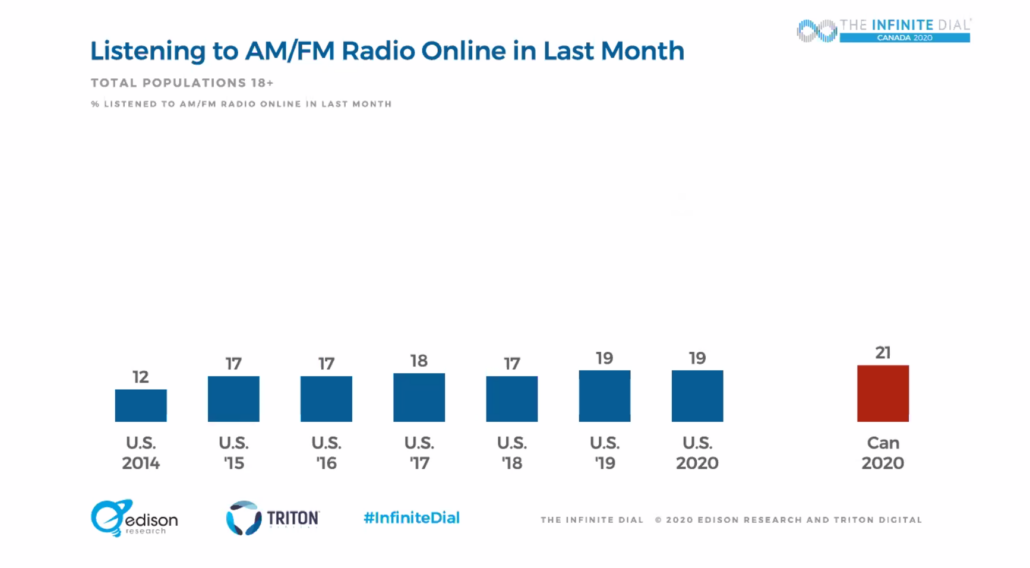 Apple, Spotify and Google Play lead brand awareness in Canada, followed by Amazon Music and iHeartRadio. Spotify, without competition from Pandora in Canada, has established itself as the most listened to online brand with 28% of Canadians saying they had listened in the last month, trailed by Apple at 13%. 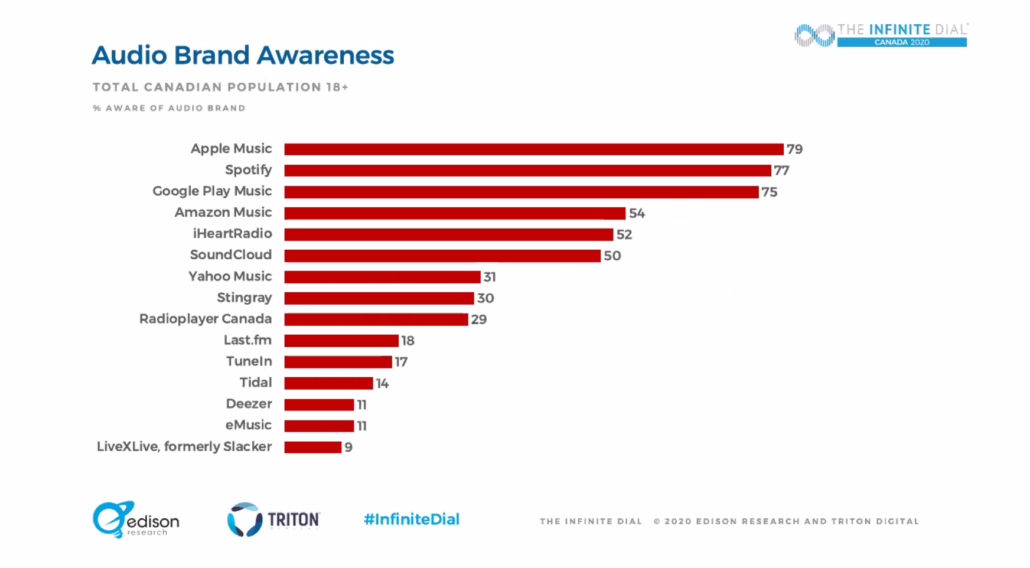 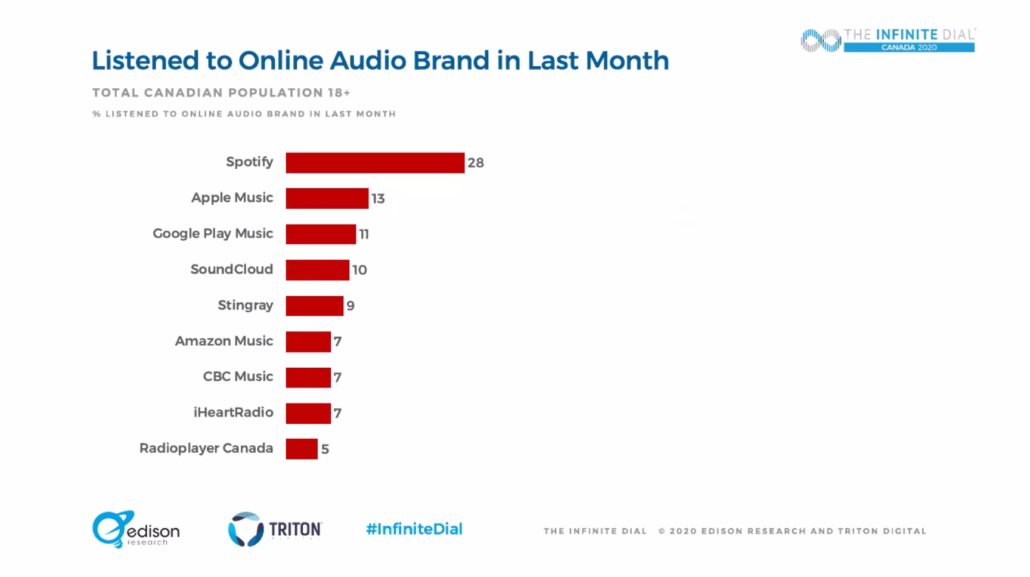 Donovan said the other Canadian brand awareness story is watching services that ranked mid-tier like Stingray and Soundcloud.

“There are more contributors in the space, which isn’t only going to grow online audio, but competition,” said Donovan, also noting that when asked what audio brand respondents used most often, CBC Music and Stingray made the top five. 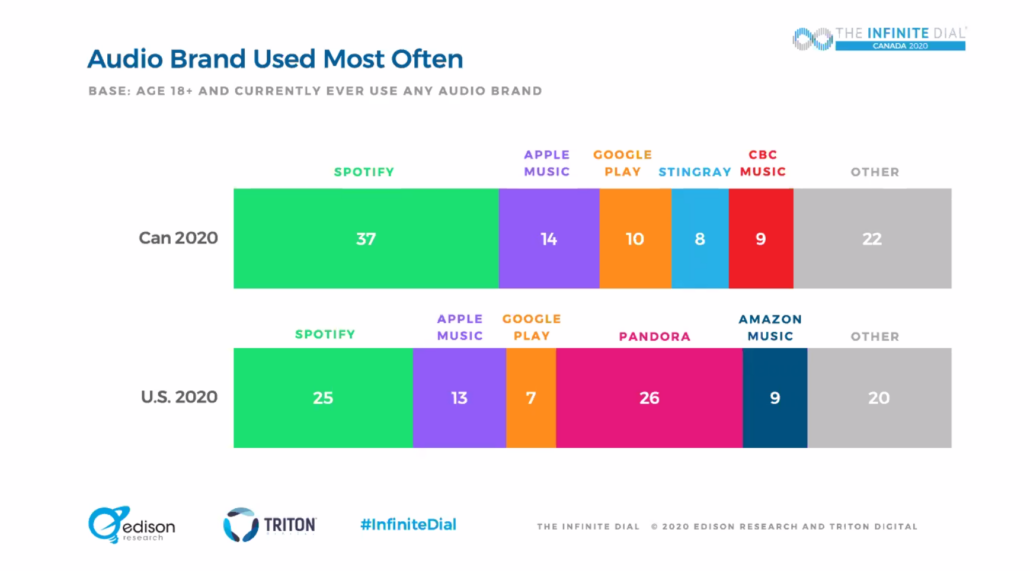 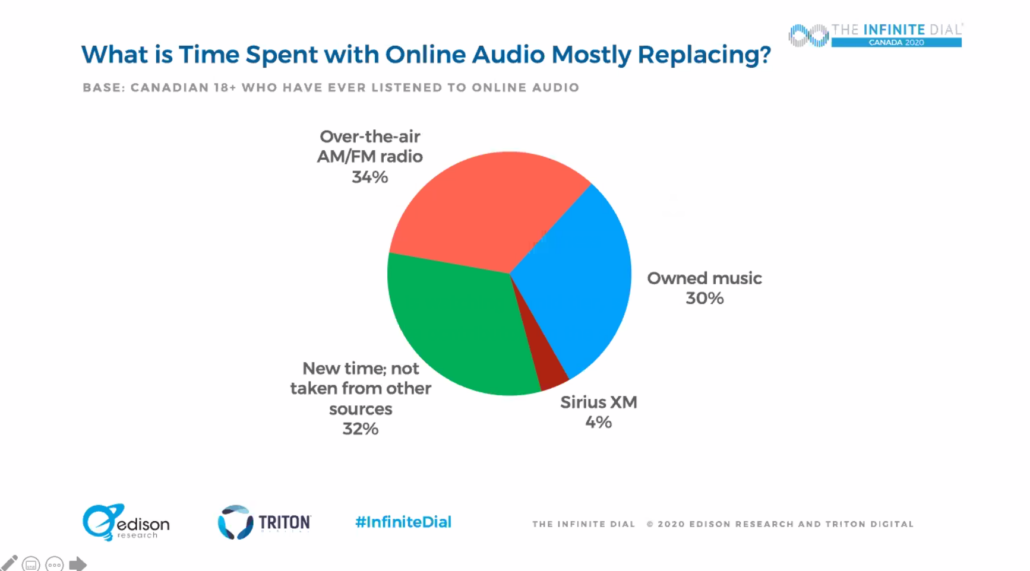 When looking at in-car audio, 57% of Canadians said AM/FM is the source they use most often in-car (down from 79% last year), while in the U.S. that number dropped to 50%.

Webster said online radio is lagging in-car on this side of the border as people get used to using unlimited data and mobile consumption plans. He predicts that number will jump next year as users connect more with their phones in-car and embrace connected in-dash systems.

The survey found that 23% of Canadians now have an in-dash entertainment system in their vehicle, compared to 18% of Americans. 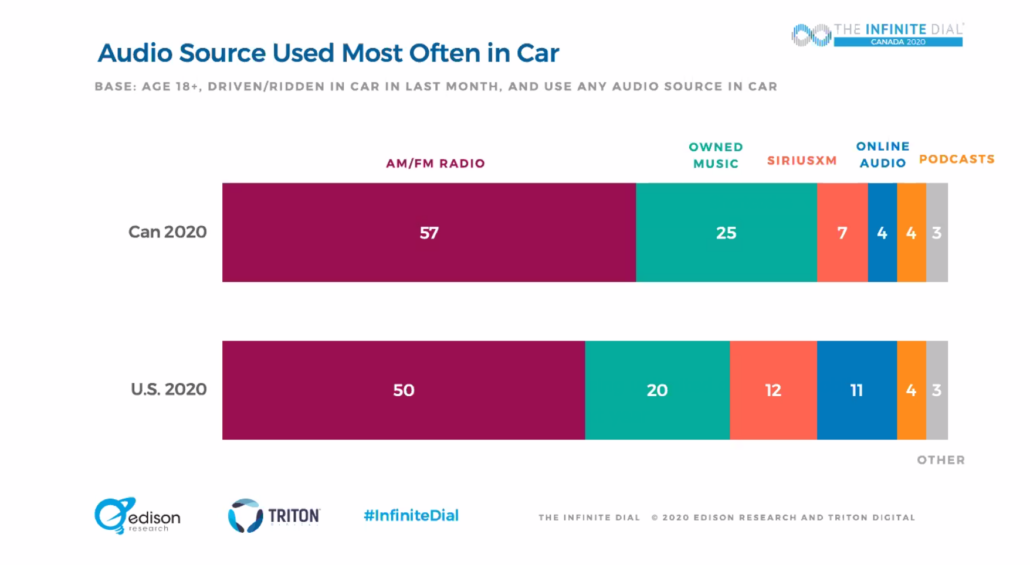 Infinite Dial found that 74% of Canadians are familiar with the term podcasting, in line with the U.S., with 24% listening weekly. Canadian podcast listeners skew slightly more male, 60% v. 40% in the U.S. where gender parity among podcast listeners is closer to 50/50 as podcasts reach the mainstream. The average age of podcast listeners in Canada is also younger with those aged 35-54 making up the bulk (41%) of monthly podcast consumers. 35% of Canadian listeners fall into the 18-34 demo. 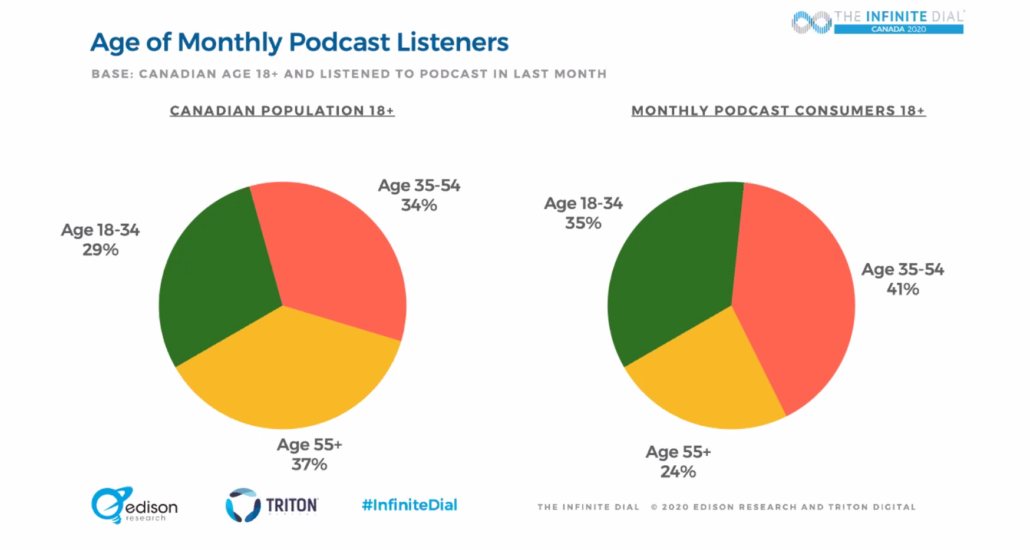 Canadians on average are listening to six podcasts a week, with 27% of listeners averaging three podcasts per week, and 22% averaging six to 10. 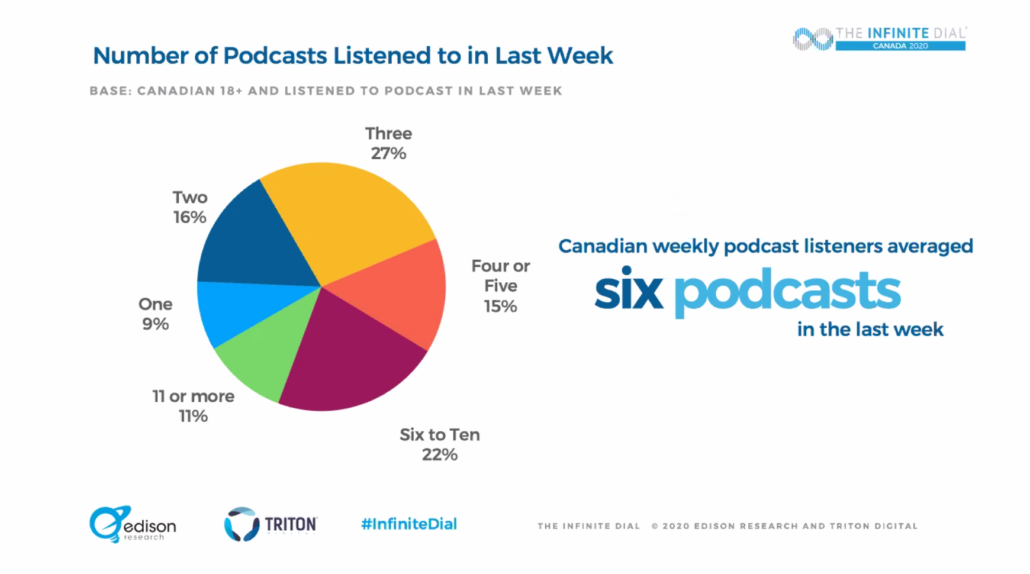 74% of Canadians are listening to podcasts on a mobile device, with the most popular place to listen to a podcast at home (81%), in-car (40%), or while walking around (34%), followed by the gym, on public transportation or at work.

Half of all Canadian podcast listeners say they listen to podcasts produced by public radio, like CBC and NPR.

45% of respondents said they listen to the entire episode of most podcasts, while another 35% listen to most of an episode.

Donovan said that’s emerged as a trend with similar analytics produced by Triton-owned podcast host, Omny Studio, when looking at podcast episodes by show and platform.

“Broadly speaking our metrics are exactly what we’re seeing here. The majority of listenership for a less than hour long show comes in at just over half. That will vary by genre, but on average we mirror what the survey shows here,” said Donovan.

Half of listeners also indicated they listen to 75 to 100% of podcasts they download. 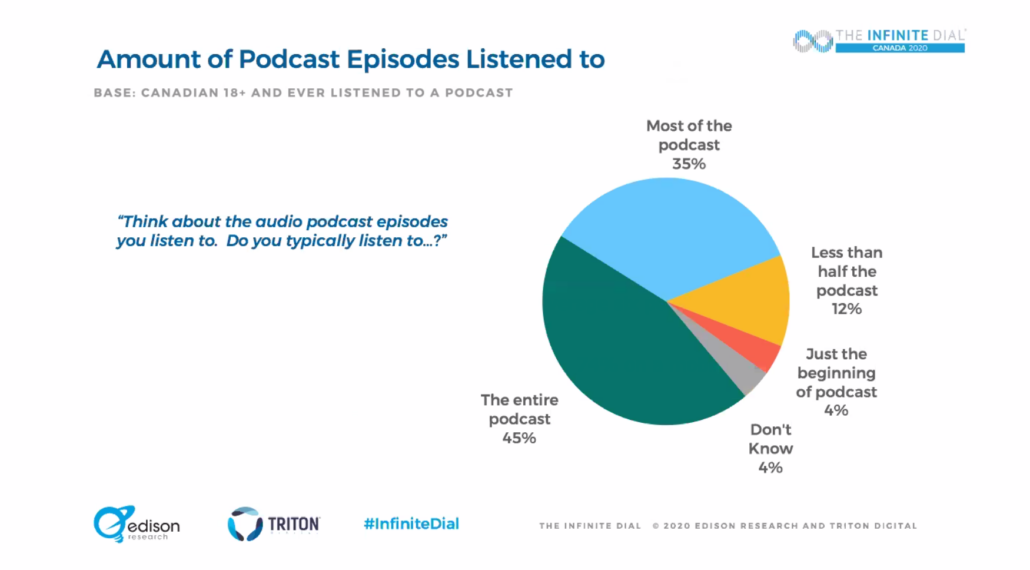 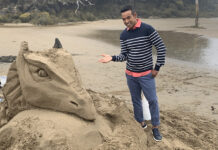