Bell Media undertook another round of layoffs on Wednesday that appears to be focused on its Ontario radio stations. 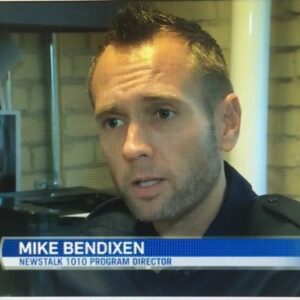 Among those caught up in this latest round are longtime Newstalk 1010 (CFRB-AM) Program Director Mike Bendixen, who also held the role of National Format Director, News & Talk Programming. Bendixen, who started his career with CFRB in 1998, had been in his current role for the last 12 years. He’ll reportedly be replaced by TSN 1050 (CHUM-AM) Program Director Jeff MacDonald, who will do double duty for both stations going forward. MacDonald has been with TSN for the last seven and a half years.

Also part of this round of cuts is Greg MacDonald, Regional Creative and Production Director for Bell Media Southwest Ontario, for both radio and television. MacDonald had been with Bell since 2014 and in his current role since 2015. He previously spent 17 years as a senior producer with Toronto’s 98.1 CHFI before moving into the Hamilton market as a Production Creative Director for Corus Radio.

A Bell Media spokesperson told Broadcast Dialogue that out of respect for the privacy of its employees, it would not offer specifics on those moving into new roles or departing the company.

Bell Media made a similarly-timed round of layoffs across its radio stations in Nov. 2020 as it moved to scale up its Virgin Radio and Pure Country brands and ahead of rebranding 10 stations under the MOVE banner.

The cuts continued in January with a round of executive and middle management departures and later roughly 210 positions across sales, administration and news in February. More recently, the company laid off 27 and reclassified another 22 positions in August at its Queen Street location in Toronto.

In the latest BCE quarterly report, Media segment revenue grew 14.5%, reflecting higher advertiser spending across all platforms and a 32% increase in digital revenue, which now represents 22% of total media revenue. Media operating revenue was also up 14.5% in Q3 to $719 million, driven by increased ad spending across TV, radio, out of home and digital media platforms as the economy continues to recover from COVID-19.

If you’ve been impacted by this latest round of cuts and would like to let employers know you’re available for work by appearing in our Revolving Door column in our Weekly Briefing, email us at submissions@broadcastdialogue.com.