As first reported by VICE News, Stafford’s departure allegedly comes after he used the term “P*ki” in a Microsoft Teams conversation, a perceived attempt at a joke in reference to a news conference held by Ontario Premier Doug Ford.

A Corus spokesperson told Broadcast Dialogue on Thursday that they can confirm Stafford is no longer with AM 640, but were unable to provide further details. 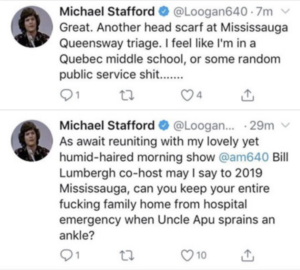 This isn’t the first time Stafford has courted controversy over his 20-year run with the station, including a series of off-colour social media posts in 2019 directed at the South Asian and Muslim community that resulted in a brief on-air suspension.

His departure is the latest in a string of internal incidents that sparked a diversity review within Corus last year after a number of BIPOC employees came forward with allegations of a workplace culture of racism and micro-aggressions. That review concluded that some managers lacked intercultural awareness with not enough accountability measures in place to ensure diversity and inclusion goals were being met. It also found that a lack of diversity within company leadership has had a negative effect on the overall workforce.

Stafford’s former co-host Supriya Dwivedi, who had been with the station’s morning show since 2016, resigned last November, citing the company’s lack of attention to upholding journalistic standards on the talk station and a lack of support to deal with an increasing number of personal attacks, hate mail, racist comments and threats. Dwivedi has filed a grievance with the Canadian Human Rights Commission.