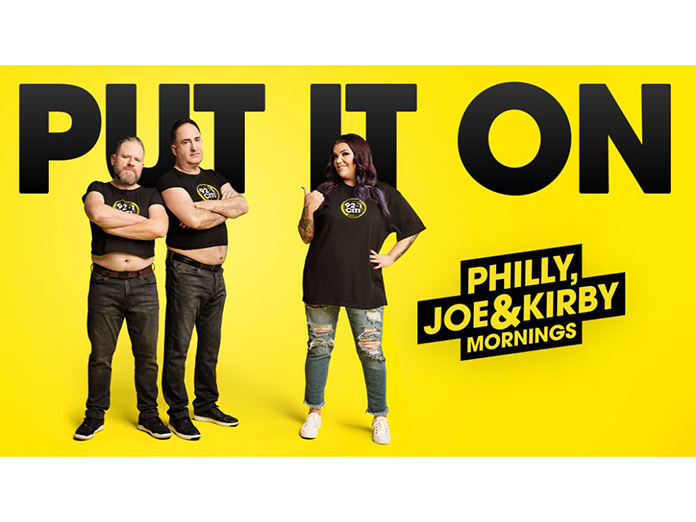 Formerly highly-rated on Corus Radio Active Rocker Power 97 (CJKR-FM), Kirby was the first member of the morning show trio to cross the street to Rogers in November 2021. Aubrey followed in July, roughly six months to the day he departed Power, while Aiello arrived Monday after opting not to renew his contract with Corus.

Kirby and Aubrey had been hosting weekday mornings together since late July. Aiello’s return had been teased under the guise of an on-air co-host search looking for “an average Joe.”

“Our search for an average Joe is over! Philly, Joe and Kirby are back together and bringing their fun, interactive and entertaining show to 92.1 CITI,” said Content Director Mike Uhrich. “This year, Winnipeg’s Rock Station celebrates it’s 45th Anniversary, and we kicked off the festivities early by launching Philly, Joe & Kirby, weekday mornings from 6-10 on 92.1 CITI.”

“People have flocked to the station over the past six months to tune into Philly & Kirby. Now, even more rock listeners will make 92.1 CITI and Philly, Joe & Kirby a part of their mornings,” continued Uhrich. “Winnipeggers can tune in to hear the city’s best morning show alongside the best rock playlist you’ll find anywhere.”

Aiello’s move to CITI marks a return to the legendary rock station as formerly one-half of iconic morning duo “Tom and Joe,” with co-host Tom McGouran, who enjoyed an 18-year run together from 1994 to 2012.

Power 97, meanwhile, launched a new lineup over the summer with market veterans Jay, Nic & Vic in mornings. Jay Richardson was formerly heard in afternoons on Power and Nic Welsh in middays, while Vicki Shae was part of the morning show at the former 94.3 The Drive (CHIQ-FM), alongside McGouran, prior to the station’s rebrand to NOW! Radio. She’d been joining Aiello on mornings prior to his July exit.