Pattison Media has wiped its talent slate at Winnipeg’s 94.3 The Drive (CHIQ-FM) as the company revs up for an anticipated format flip to 94.3 Now! Radio, its Hot AC format, currently heard on CKNO-FM Edmonton. 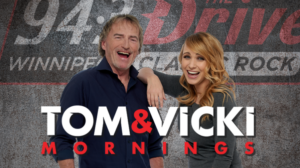 The moves comes as a cryptic “NOW” billboard campaign pops up around the city. Pattison told Broadcast Dialogue an announcement will be forthcoming on Monday.

McGouran had been with the station the last five years, while Shae joined him on mornings in 2019. Parker had worked with CHIQ the longest, dating back to 1988 when the station was CHUM-owned Hot AC powerhouse Q94 FM. Since then, the station has been through several ownership and branding changes, including Curve 94.3, “Winnipeg’s Pop Alternative” and Fab 94.3, an oldies/classic hits format. CHIQ and sister station QX 104 (CFQX-FM) were acquired by Pattison in 2013 as a by-product of Bell Media’s acquisition of Astral Media. The station was rebranded as 94.3 The Drive in February 2016.

Thank you for making my 📻career more than I could have ever imagine. It’s been a wild ride. ❤️🤘#radio

The anticipated format flip comes amid speculation as to whether the Winnipeg market can sustain three rock stations longterm with both a shrinking radio audience in the prairie city of 850,000 and competition from Rogers Sports & Media rock mainstay 92 CITI and Corus Radio’s Active Rock-er Power 97 (CJKR-FM).

92 CITI, which prior to the pandemic was the ratings leader with Men 25-54 (13.5% share) and 18-34 (16.2%), has been navigating its own internal struggles, with former Vista Radio VP of Content Murray Brookshaw brought in to consult and serve as interim Content Director.

Earlier this month, Dave Turnbull confirmed he’s no longer with the station. Turnbull was the last member of 92 CITI’s former morning show, Rena, TJ & Turnbull, to officially part ways with the station following the departure of Rena Jae and TJ Connors over the summer. CITI has been struggling to find synergy in the a.m. time slot since former morning man Dave Wheeler was released from his contract in 2018. Pancho Parker has been filling in on CITI mornings in the interim.