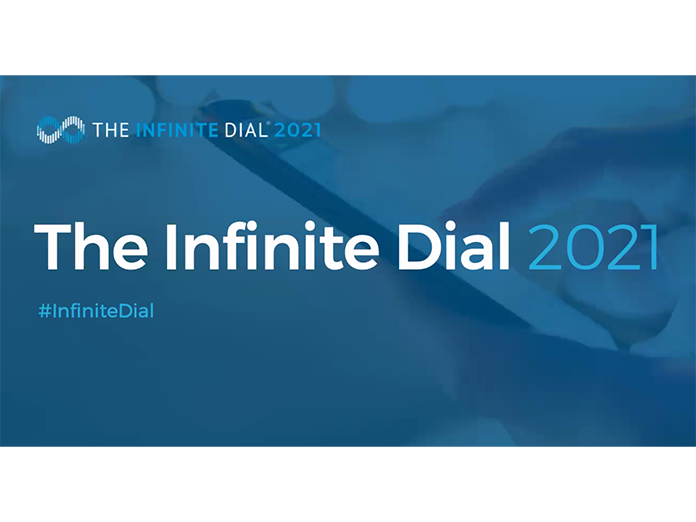 Podcasting has seen significant growth in weekly listening and TikTok use has surged, according to the 2021 Infinite Dial – the longest-running survey of consumer digital behaviour – released by Edison Research and Triton Digital on Thursday.

Based on a January telephone sampling of 1,507 Americans, 12+, the survey was conducted in both English and Spanish, with the results weighted to U.S. census data.

Smart watch adoption remained flat, while smart speaker ownership accelerated in 2021 to an all-time high of 33% of Americans, up from 27% in 2020. Ownership jumped to 49% among those who said they work from home. 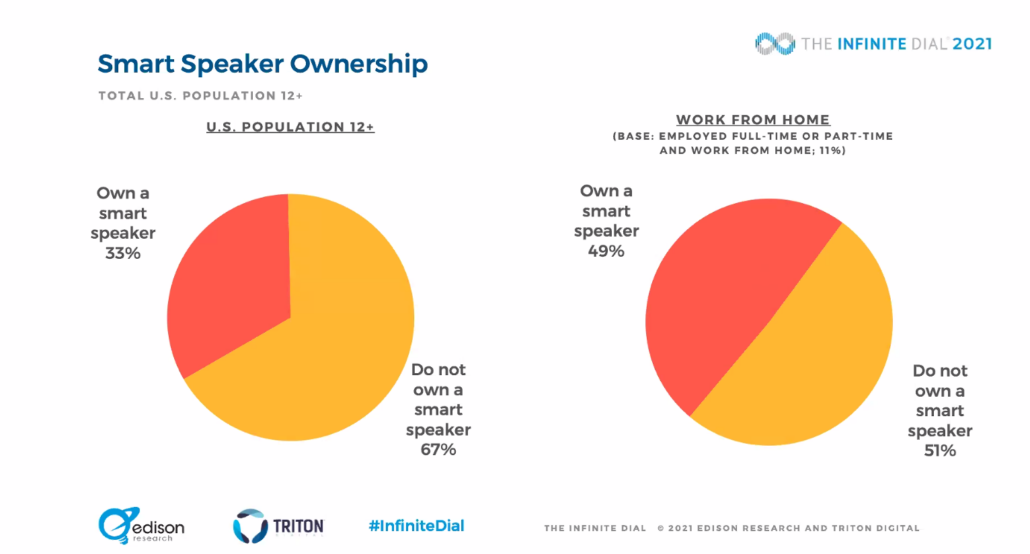 The number of smart speakers owned by a household also increased slightly to 2.3 units. 24% own Amazon Alexa-enabled devices, followed by Google Home at 13%. Just one per cent of Americans said they owned a pricier Apple HomePod device.

Despite the pandemic and reduced time spent commuting, the number of Americans listening to audio books went up from 45 to 46% or 131 million people.

The number of those who said they have watched a livestreamed video game via platforms like Twitch, Mixer, YouTube Live or Facebook Live, saw a 33% year-over-year increase. That included a boost in popularity with women, moving from 11 to 17%. In the 12-34 demo, watching livestreamed video games jumped from 26 to 38% in that age group, with an accompanying boost in those who have played a game they’ve streamed live. 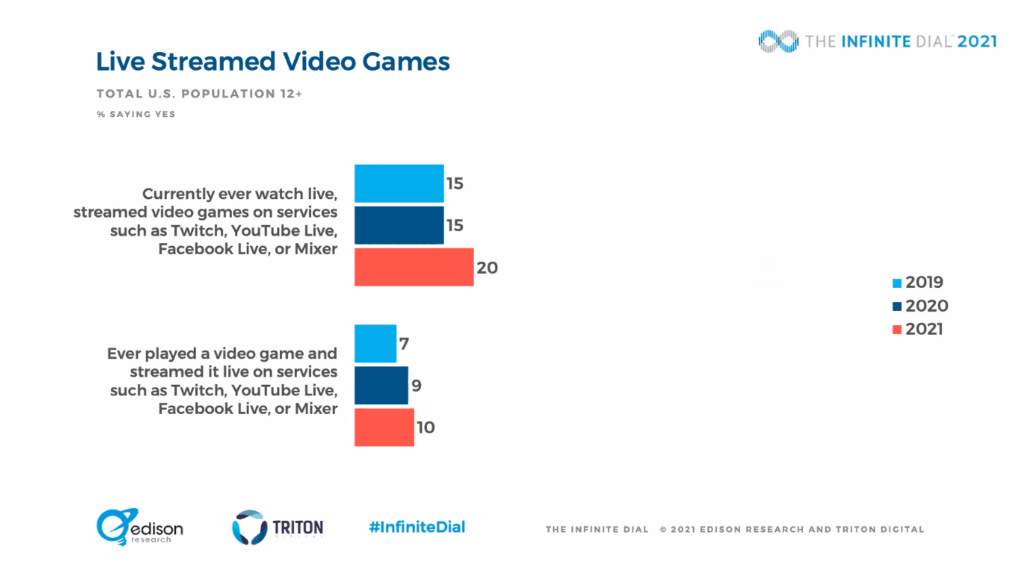 Infinite Dial found that overall social media usage is up slightly from last year, moving from 80 to 82% of Americans. Facebook still has the most brand awareness, with notable jumps in brand recall for the TikTok app (64 to 86% awareness) and a notable usage surge among 12-34 year olds. 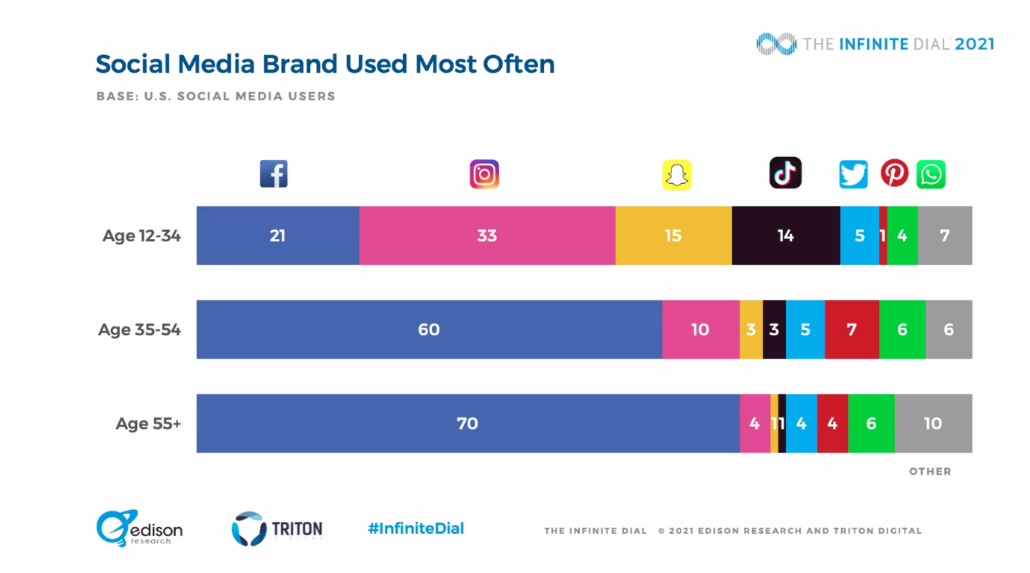 When asked about the social media brand used most often, for the first time the majority of users did not say Facebook as Instagram gained traction with the 12-34 demo. 33% of social media users in that age group say they use Instagram the most, versus 21% who cited Facebook.

After years of growth, this year’s Infinite Dial survey found that online monthly audio listening plateaued at 68% or 193 million Americans. Weekly consumption saw a slight increase, while average time spent listening saw a seven per cent increase from 15 hours and 12 minutes a week in 2020 to 16 hours, 14 minutes a week this year.

Pandora leads in terms of audio brand awareness (83%), followed by Spotify 76%) and then iHeartRadio, Apple Music and Amazon Music. 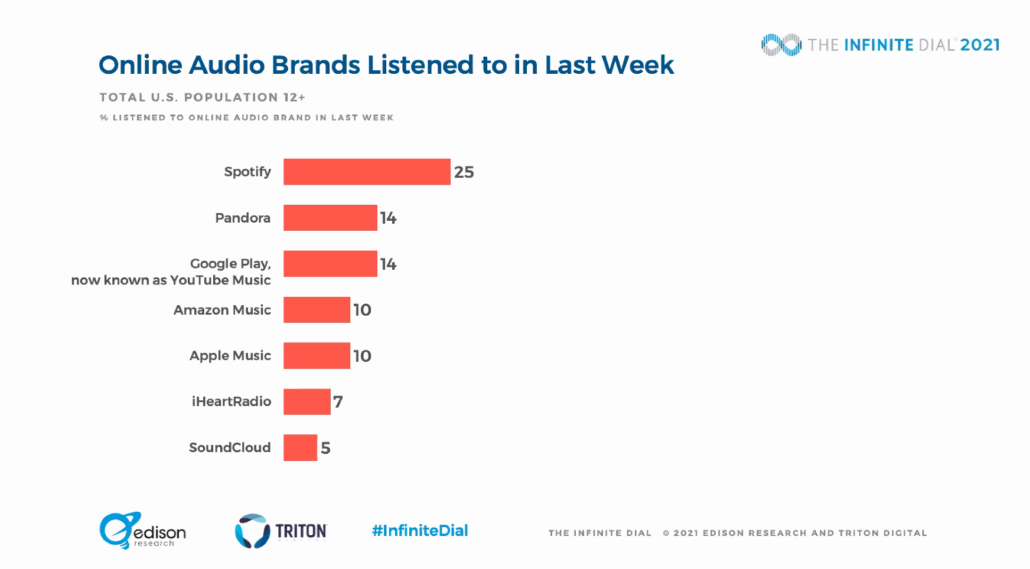 When asked about online audio brands listened to in the past week, Spotify was cited the most often by 25% of those surveyed, followed by Pandora (14%) and Google Play (now known as YouTube Music). Amazon Music was a strong number two among those who own an Amazon Alexa-powered device.

A new question posed by The Infinite Dial this year asked participants how often they listen to online audio with others. Those aged 12-34 responded that they co-listened 32% of the time vs. 24% of those 12+. 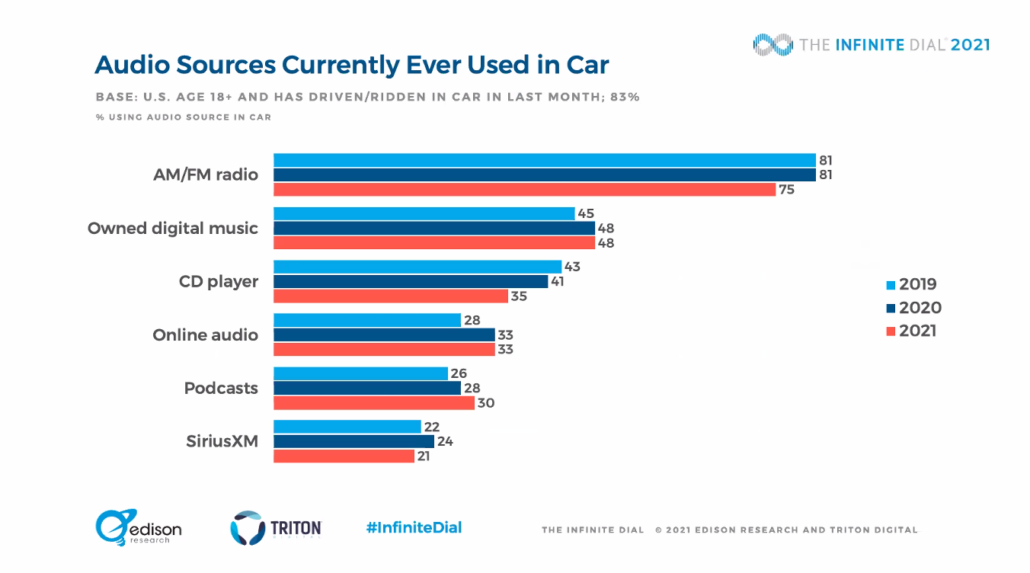 The number of those who drove in the last month dropped from 87 to 83% among survey respondents, year-over-year. While AM/FM still reigns in the car, listening dropped from 81 to 75%. SiriusXM tuning also fell from 24 to 21%, while podcast listening in-car went up from 28 to 30%.

Those listening to online audio in the car via their cell phones jumped from 45 to 50%. Of those with vehicles featuring integrated mobile operating systems, 10% said they have Apple Car Play with 8% using an Android Auto system.

Once the initial disruption of the pandemic’s first wave was over, including a slump in podcast tuning, monthly podcast listening jumped from 37 to 41% over the past year or 116 million Americans. 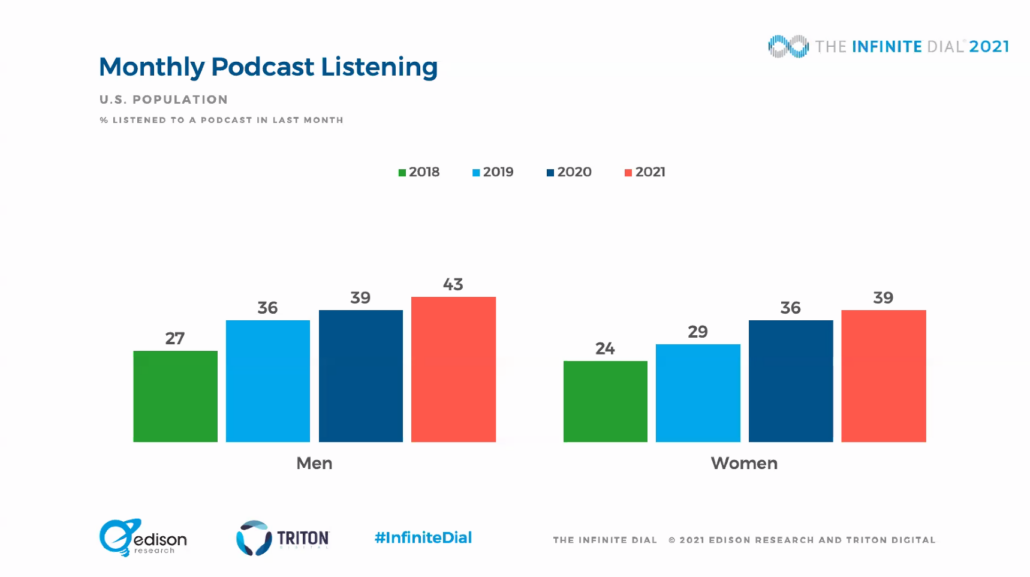 Forty-three per cent of men have listened to a podcast in the last month vs. 39% of women, both up year-over-year. This year’s numbers indicate the gender listening gap is closing, compared to the U.S. population, with podcasting also getting less white, driven by the medium’s growing popularity with 12-34-year-olds. 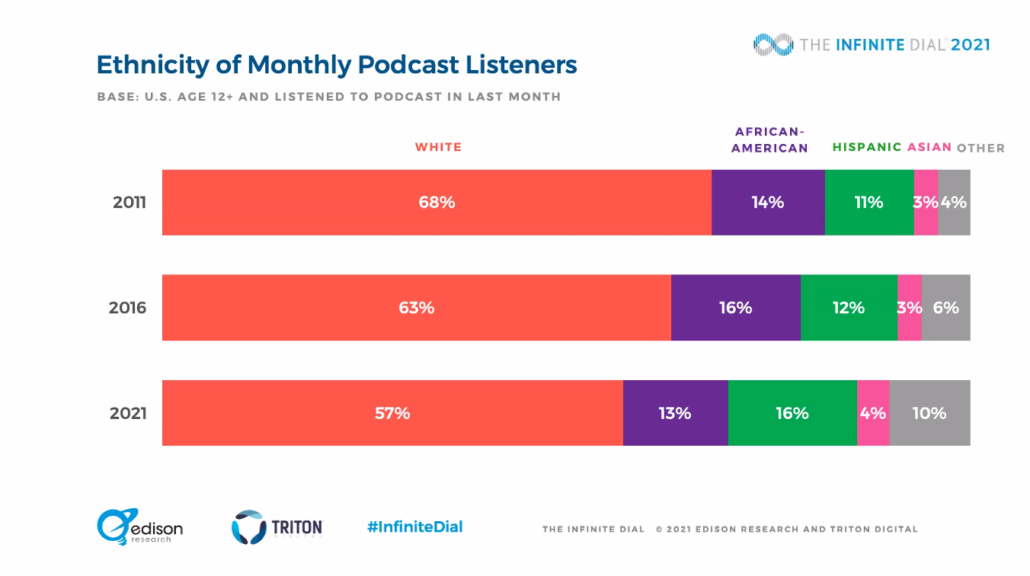 “Just 10 years ago, 68% of monthly podcast consumers identified as white. Today, that’s 57% which means that 43% identity as non-white and that is actually more diverse than the U.S. population,” explained Webster. “What is driving some of that is the youth podcasting audience…even though about 60% of the U.S. population identify as white, 50% of those 16 and under are white. So, the younger parts of our population are less and less likely to identify as white as we move forward with census data.”

Edison and Triton Digital will release the results of The Infinite Dial – Canada in the coming weeks.