The Toronto Star and iPolitics have signed on as media partners for upcoming podcast, The Paul Wells Show, scheduled to launch in mid-September.

Hosted by the veteran political journalist, the show will focus on politics and culture with the initial 20 episodes to feature politicians, public figures and commentators, including David Cohen, U.S. Ambassador to Canada, and Alberta Premier Jason Kenney. 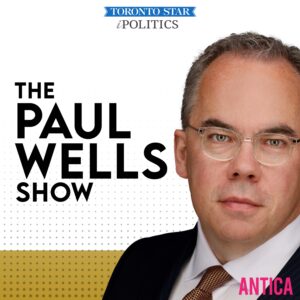 Wells has covered Canadian politics for 30 years, writing for Maclean’s, the Toronto Star, the Globe and Mail and National Post. His 2006 book Right Side Up: The Fall of Paul Martin and the Rise of Stephen Harper’s New Conservatism was selected as one of the Best Canadian Political Books of the Last 25 Years by the Writers’ Trust of Canada and Samara. He also recently launched a subscription-based newsletter on Substack.

Anne Marie Owens, Editor-in-Chief of the Toronto Star, said in a release that they’re hoping the partnership will help boost listenership of the newspaper’s audio offerings.

“We are proud to be a partner of The Paul Wells Show,” said Owens. “This show helps grow our listenership and builds on our existing strength in the podcast space established by It’s Political with Althia Raj, which launched last year and became one of the top political podcasts in Canada.”

The Paul Wells Show is produced by Antica Productions, in partnership with the National Arts Centre of Ottawa, and the University of Toronto’s Munk School of Global Affairs and Public Policy.

Wells will join the Munk School for the 2022-23 academic year as its inaugural journalist fellow-in-residence. As part of the appointment, he’ll host a series of live taped events in Ottawa, Toronto and other major Canadian cities that will include stops at the Munk School and National Arts Centre.

Ottawa public affairs firm, Compass Rose, is the title sponsor for the podcast series. TELUS is the founding sponsor.