Numeris’ PPM release for the 13-week period covering Aug. 26 to Nov. 24, 2019, reveals that CBC Radio One is still number one A12+ in Toronto, Vancouver and Calgary. In Montreal, CHMP 98.5FM ranked number one with Franco listeners, while CJAD 800 was tops with Anglo audiences with a 25.1% share. In Edmonton, Jim Pattison Broadcast Group’s NOW! Radio (CKNO-FM) was in first place. Read the full breakdown for the five PPM Markets here, courtesy David Bray.

The Hill Group of Companies, the parent company of Harvard Broadcasting, has acquired Regina-based agency Carbon Marketing to form Harvard Media. Harvard Media will provide marketing solutions in both traditional and digital advertising spaces, according to a news release, with new and existing clientele to “benefit from the synergies between radio and digital.” Founded in 2008 as the internal marketing department for Capital Automotive Group, Carbon Marketing has previously worked to help build the digital brand of Harvard Broadcasting’s Regina radio stations and executed national campaigns for the Friends of the RCMP Heritage Centre, among others. Read more here. Giant FM (CIXL-FM) Pelham, ON has received a Corporate Recognition Award from the Town of Pelham. Awarded at the town’s annual Volunteer Recognition Awards, the honour is based on nominations from local volunteer groups and organizations. Giant FM was recognized as the most-nominated business for its support of community efforts.

980 CKNW Vancouver’s annual Kids’ Fund Pledge Day on Dec. 3 raised a total of $2,656,230. Broadcast live from the Fairmont Hotel Vancouver, this was Pledge Day’s 75th year, in line with the station’s milestone anniversary celebrated in August. Formerly known as the CKNW Orphans’ Fund, the Corus Radio station charity has been supporting BC kids with physical, mental and social challenges since 1945. Bayshore Broadcasting’s 560 CFOS Owen Sound held its 80th Annual Christmas Fund Broadcast on Dec. 1, raising more than $22,000 by the end of the broadcast. The seven-hour live-to-air show from Owen Sound’s Roxy Theatre featured local bands, solo performers and choirs, while pledges were solicited to support over 20 local charities and non-profit organizations in Grey and Bruce counties. CFOS and local newspaper The Sun Times have partnered to put on the event every holiday season since 1940. iHeartRadio Canada has launched The Munk Debates Podcast – a new iHeartRadio Original Podcast from Antica Productions. The 40-minute weekly podcast is an extension of the Munk Debates’ forums tackling issues facing Canada and the world. Taped in-studio in Toronto, the podcast features brand-new debates, in addition to recuts of classic Munk Debate stage events on topics such as religion, “the end of men”, and political correctness. Hosted by Rudyard Griffiths, debaters featured include Stephen Fry, Steve Bannon, Bret Stephens, Niall Ferguson, Bari Weiss, and Jordan Peterson, among others. Expect Theatre and CBC Podcasts have launched a new season of PlayME, the podcast that turns Canadian plays into audio fiction. Thriller Butcher by Governor General Award-winning writer Nicolas Billon kicks off the season, which will also feature The Boy In The Moon by Emil Sher, adapted from the memoir by journalist Ian Brown; Crawlspace by Dora Award winner Karen Hines; Take da Milk, Nah? by Jiv Parasram; and drama carried away on the crest of a wave by David Yee. Each play will be recorded in three episodes, followed by an in-depth interview with the respective writer.

LISTEN: On the latest episode of Broadcast Dialogue – The Podcast, we welcome Jeff Vidler of Audience Insights Inc. back to the podcast to talk about the findings of the 2019 Canadian Podcast Listener Study. We cover what Canadians are listening to, why on-demand audio is the next destination for advertisers, and his advice if you’re an independent podcaster trying to monetize.

The Canadian Podcast Listener (CPL) study says one in 10 monthly podcast listeners in Canada purport to have donated money to a podcast through a crowdfunding service. Among Power Listeners – those who listen to podcasts 5+ hours a week – that number nearly doubles to 18%. Four in 10 Power Listeners say they’ve contributed directly to podcasts either through crowdfunding services like Patreon or Indiegogo, buying merchandise or going to a live show. CPL says men and younger demos are most likely to contribute via crowdfunding, peaking at 15% among men aged 18-34. Quebec podcast listeners are also more likely than others to toss a few dollars into a podcast “tip jar.” Read more here. 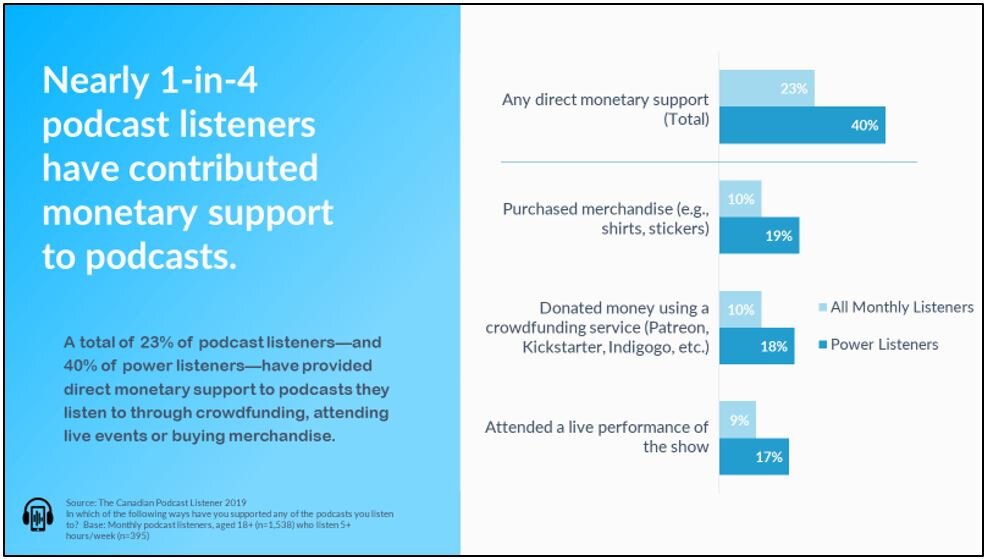 SiriusXM has announced a new creative partnership with U2 to launch U2X RADIO, which will include a dedicated SiriusXM channel and exclusive content available to SiriusXM subscribers and Pandora listeners. U2X RADIO will launch in 2020 with the band themselves taking to the airwaves and will feature music from the band’s decades-long career; never before heard interviews and live concert recordings; and band curated playlists. The partnership joins similar exclusive content deals with LeBron James’ UNINTERRUPTED, Drake and comic book giant Marvel Entertainment.