Hewitt succeeds Drex, aka Justin Wilcomes, the founding host of the show, which launched in Jan. 2018. Wilcomes left Corus in August to pursue other opportunities. Based in Calgary, Hewitt has been a frequent guest host.

Hewitt is also an entrepreneur as a founder and partner in commercial out-of-home music service, Playdio, which curates and licences music for retail and other businesses.

“The culture of live, late-night radio is unique, unifying, and unpredictable,” said Larry Gifford, National Director, Talk Radio, Corus Entertainment, in a release. “I am excited to hear the Canadian conversations and stories shared with Shane as he becomes part of the late-night experience in cities and towns across the country.” 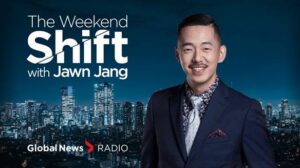 The weekend edition of the show, The Shift with Jawn Jang airs from 1 a.m. to 5 a.m. ET on Saturdays. In addition to hosting The Weekend Shift, Jang is a regular contributor to 980 CKNW.