Global Reporting Centre, the University of British Columbia-based independent, not-for-profit media organization dedicated to innovating global journalism, is a 2022 Edward R. Murrow National honouree. The centre’s short film series, Turning Points, about alcohol use, addiction, resilience and healing in Yellowknife – directed by the storytellers themselves – was recognized for Excellence in Diversity, Equity, and Inclusion. The series was broadcast in partnership with PBS NewsHour. Turning Points was also awarded a Silver Medal at the inaugural Anthem Awards in the Diversity, Equity, & Inclusion category.

Cheryl McKenzie, Executive Director of News and Current Affairs at APTN, has been selected as the winner of the 2022 NAJA-Medill Milestone Achievement Award. Awarded by the Native American Journalists Association (NAJA) and Northwestern University Medill School of Journalism, Media, Integrated Marketing Communications, the award recognizes responsible storytelling and journalism. McKenzie has been with APTN for the last 21 years, starting as a reporter, producer, and host before being promoted to her current role.

Aphrodite Salas has been appointed as the second inaugural John Lemieux Faculty Fellow at the Montreal Institute for Genocide and Human Rights Studies at Concordia University. Her fellowship work will focus on preserving freedom of the media and combating misinformation and disinformation in Southeast Europe. The former CTV, Citytv and Global anchor and reporter is now an Assistant Professor in the Department of Journalism and Director of the Graduate Diploma Program. She’s also a research associate at the Concordia University Acts of Listening Lab and a member of the Concordia Centre for Broadcasting and Journalism Studies.

Enough is enough. Online hate against journalists must be addressed.

Here’s what we want🧵 pic.twitter.com/J4bZenAopP

Global News, the Toronto Star and The Hill Times, along with the Canadian Association of Journalists (CAJ), have sent a letter to Ottawa Police interim chief Steve Bell, Toronto Police Chief James Ramer, and Justice Minister David Lametti, among others, following a rise in racist and sexist threats to female journalists. The news organizations are calling for greater coordination and a formal complaint process for media who’ve become targets of harassment and threats. Among those targeted over the last few weeks are The Hill Times columnist Erica Ifill, Global News reporter Rachel Gilmore, and Toronto Star podcast host and producer Saba Eitizaz. Gilmore documented the less than urgent response she received when reporting a death threat to Ottawa Police.

The Canadian Association of Journalists (CAJ) says it’s disturbed by new information about a neo-Nazi plot to kill a Winnipeg Free Press journalist, and is calling on the RCMP to clarify what steps it took to investigate the murder plot. In 2019, Ryan Thorpe went undercover to expose Canadian Armed Forces reservist Patrik Mathews as a member of neo-Nazi group, The Base. Mathews subsequently fled to the U.S., where he was arrested and sentenced to nine years in prison for weapons charges and plotting violence. Last week, German newspaper Zeit Online reported that Mathews’ co-conspirators had created a photo montage that fantasized about Thorpe being decapitated, with their “original plan” to kill Thorpe before smuggling Mathews over the border. RCMP were aware of the threat to Thorpe’s life and notified him via letter, but did not offer any protection or give him any indication of how to evaluate the threat. Thorpe only learned about the specifics of the plot to kill him as a result of Zeit’s reporting. CAJ says the incident “raises troubling questions about Canadian law enforcement’s response to these threats.” Rogers, Shaw, and Quebecor have entered into a definitive agreement for the sale of Freedom Mobile to Quebecor subsidiary Videotron, subject to regulatory approvals and closing of the Shaw/Rogers merger. In a release, the parties say they strongly believe the Freedom transaction provides the best opportunity to create a strong fourth national wireless services provider and addresses concerns raised by the Commissioner of Competition and Minister of Innovation, Science and Industry regarding the Rogers-Shaw transaction. 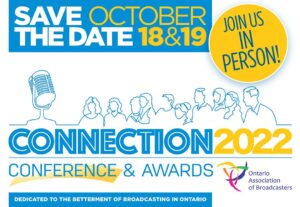 The Ontario Association of Broadcasters (OAB) CONNECTION 2022 conference will return in-person, Oct. 18-19. Usually held in November, this year’s event is also being moved to a new venue at the Hyatt Luxe Convention Centre in Mississauga. OAB said in an email to members that it’s purposely scheduled the conference earlier in the year and limited registration to a maximum of 200 people to create space for social distancing and alleviate COVID-19 concerns as much as possible. Read more here. The B.C. Association of Broadcasters (BCAB) Awards of Excellence are open for submissions, celebrating the best in radio and TV production, news and community service in British Columbia. The eligibility window for entries is Jan. 1, 2021 – March 31, 2022. Submissions close Friday, Sept. 9.