The National Campus & Community Radio Association (NCRA/ANREC) has announced the winners of this year’s Community Radio Awards In Broadcast and Online. Known as the CRABOs, this year’s winners were led by Edmonton’s CJSR-FM, which picked up wins for Excellence in Sports Broadcasting, Best Current Affairs or Magazine Program, and News. Dalhousie University campus station CKDU-FM, the University of Calgary’s CJSW-FM, and CIVL-FM, the campus and community radio station serving the University of the Fraser Valley (UFV), each picked up three awards. Among the CIVL-FM programs recognized was long-running music program, The Wheelbarrow, whose creator Greg Aitken, passed away in February. This year’s GameChanger Award was presented to Luke Smith, who served as the NCRA’s Learning and Development Officer for seven years. Smith accepted a new role as Station Manager at CIUT 89.5 FM Toronto in May. Read more here. 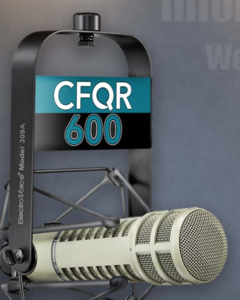 99.3 County FM (CKPE-FM) Prince Edward County, ON has announced a final tally for its 8th annual Radiothon, held June 2-5. With more than $65,000 in donations received, the station exceeded its $64,000 goal for the annual fundraising event that helps keep the non-profit, community, volunteer-driven radio station on-air. More than one-third of the station’s annual income comes from donations and grants.

Canadian Music Week RadioActive sessions are now available to watch on demand with a conference or virtual pass. Among the virtual sessions are early findings from Radio on the Move 2022, presented by Jeff Vidler of Signal Hill Insights and Caroline Gianias of Radio Connects. The study, now in its 13th year, includes the latest Share of Audio findings and what’s happening with AM/FM streaming and in-car audio consumption, based on a survey of more than 4,000 Canadian adults. Among the themes explored are that radio can no longer count on its convenience advantage over other audio competitors. Radio on the Move also looks at how Canadians are using audio to satisfy “need states.” Heavy AM/FM listeners (2+ hrs/typical weekday) are more likely to use broadcast radio “to get information,” “to learn something new” and “to feel connected.” Read more here.

CBC has announced a new five-year partnership with Massey Hall that includes CBC being named as the official media partner of Massey Hall and Allied Music Centre. The partnership includes building new programming initiatives to amplify emerging and established homegrown musical talent, and a live concert series for national audiences that will be available across CBC platforms, beginning this fall. Massey Hall and CBC’s history dates back to the 1940s when performances were recorded live from a CBC broadcast booth overlooking the venue’s historic Allan Slaight Stage. The collaboration also introduces new studio spaces for CBC at Allied Music Centre, located on the fifth floor of the new building adjacent to Massey Hall, which will also offer an alternate location for CBC Radio and TV hosts to conduct artist interviews.

SoundExchange is unifying its existing publisher services to build an integrated global publisher services administration and licensing division called SX Works Global Publisher Services. SX Works will focus on launching new solutions to support the global music publisher and self-published songwriter communities, with phase one focusing on the U.S. and Canada. The new division will be led by Paul Shaver, president of the Canadian Musical Reproduction Rights Agency (CMRRA), which SoundExchange acquired in 2017. SX Works will also engage music users and emerging technology platforms to ensure they have access to accurate musical work and sound recording data. Promotions within SX Works, include: Paul Gills, SVP, Operations and Client Engagement, who will implement the publisher operations shared services model across SX Works and CMRRA’s Operational team, along with leading the newly created Client Engagement and Strategy team at CMRRA; Veronica Syrtash, SVP, Business Affairs and Corporate Development, who will oversee new business, while continuing to lead CMRRA’s legal and business affairs; and Lori Ellis, VP, Operations, responsible for the development and administration of CMRRA and SX Works operational undertakings.

LISTEN: The Steele and Vance Show is set to launch this fall on CHEK TV, which will see veteran radio and television broadcasters Lynda Steele and Jody Vance pair up to take on the issues of the day in primetime every week. On this episode of Broadcast Dialogue – The Podcast, Steele and Vance give us a behind-the-scenes look at the development of the new show. We also talk about Jody’s five-year struggle with criminal-level listener harassment, working outside the limitations of corporate media, and more. Listen on your favourite podcast app or here:

LISTEN: Canadian and UK radio and TV veteran Nails Mahoney is on the latest Sound Off Podcast, discussing his radio path with Matt Cundill and his current ventures – presenter coaching business OnAirCoach and The Radio Space – a social media site designed specifically for people in the broadcast industry to network. Listen on your favourite podcast app or here: