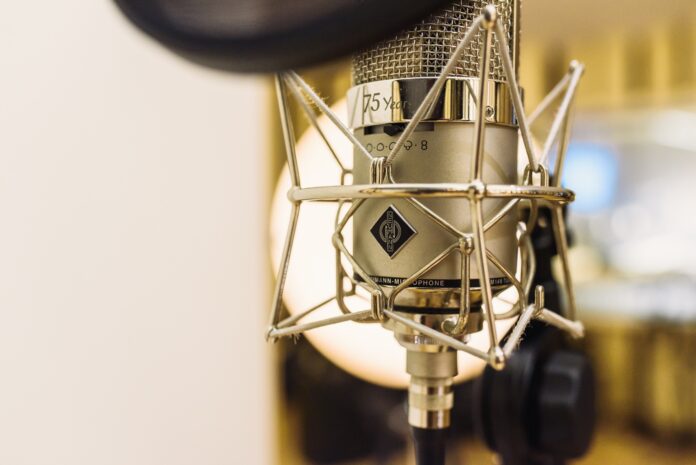 Numeris has cancelled its Fall 2020 Radio Release. In a communique to members last week, the audience measurement agency said while it was confident earlier this year that it would be able to maintain measurement during the pandemic by moving the diary online-only, “…the impact of COVID-19 and its extenuating factors have made it more challenging to recruit with response rates lower than planned with households struggling to find the time to complete the diary during this pandemic.” It will now focus on a Spring 2021 Release using the diaries collected for Fall and continuing enumeration for Spring. Lars Wunsche, Executive Vice President, Sales at Evanov Radio Group, is among those with concerns about the Fall book cancellation, telling Broadcast Dialogue “we are now forced to wait until we see any ratings indication for changes and investments that were made. By the time the results are provided, some of these significant adjustments will be almost a year old.” Read more here.

LISTEN: Numeris President & CEO Neil McEneaney was on Broadcast Dialogue – The Podcast with an update on the introduction of a new audio strategy, the motivation behind a recent staff reorganization, and how Numeris is managing some of the challenges brought about the pandemic. Listen on your favourite podcast app or here:

LISTEN: Matt Cundill responds to McEneaney’s update on the Sound Off Podcast, specifically taking issue with Numeris’ confidence in the TV paper diary method. In this episode, he also sounds off about how radio got here and what the industry should do next.

iHeartRadio Canada has launched a new series of national talk shows focused on positivity and the importance of mental wellness. Two new six-part series – Life Matters (12-1 p.m. ET) and Listen For A Change (1-2 p.m. ET) – started airing Fridays on Bell Media talk stations last week. The new series of shows will also be available for download on the iHeartRadio Canada app. Life Matters is hosted by Tony Chapman and focuses on the stories of inspiring Canadians who have overcome adversity, while Newstalk 1010 (CFRB-AM) Toronto host Jim Richards helms Listen For A Change, featuring real-time expert support for listeners struggling with their mental health. 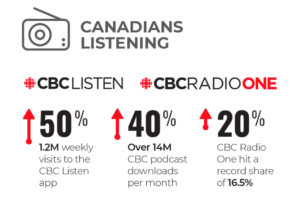 CBC has released audience data indicating engagement across the public broadcaster’s platforms was up substantially between March and July. CBC says visits to its CBC Listen platform were up 50% with an average 1.2 million visits weekly in the quarantine period, while it recorded a 40% jump in podcast downloads (14 million monthly). CBC Radio One tuning was up 20%, hitting record share of 16.5%. 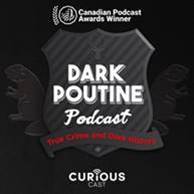 Corus Entertainment’s Curiouscast podcast network has struck a partnership with Podcast Radio in the UK that will see sample episodes of Curiouscast’s top podcasts played on the station. Podcast Radio UK launched in February and broadcasts on DAB digital radio in London, Surrey, Manchester and Glasgow. Among the podcasts to be featured are true crime series Crime Beat and Dark Poutine, The Ongoing History of New Music, and ASMR sleep podcast Nothing Much Happens. 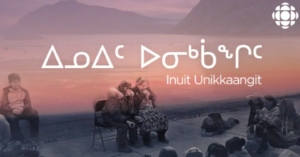 CBC North has launched Inuit Unikkaangit, an Inuktitut-language podcast that replays thousands of hours of recently digitized interviews and conversations with Inuit. Inuit Unikkaangit, which means “our stories” or “Inuit stories”, is hosted by archivist Mary Powder who plays those interviews for the descendants of the original storytellers, some of whom are hearing them for the very first time. 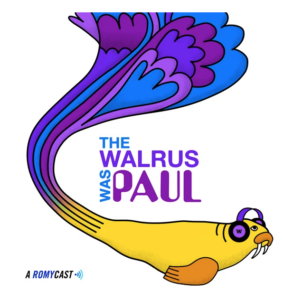 Paul Romanuk, former Hockey Night in Canada and TSN broadcaster, is seven episodes into his music podcast, The Walrus Was Paul. Romanuk chats with guests like musicians Dave Bidini, Stephen Stanley, Jim Cuddy, and former MuchMusic personality Christopher Ward, about their respective love for The Beatles, diving track by track, into their favourite Beatles or Beatles solo album.

Bayshore Broadcasting producer Kristy Henderson Andre has been selected as one of Radio Ink’s “30 and Under Superstars.” Currently the sole producer for nine stations, she sometimes produces up to 80 commercials in a day and on average 130 a week. She’s been with the radio group since 2010. Andre will be featured in an upcoming issue of the publication in December.

Jim Pattison Broadcast Group partnered with Battlefords Union Hospital Foundation to stage the On Air for Healthcare Radiothon last Friday. Heard on CJNB, Q98 (CJCQ-FM), 93.3 The Rock (CJHD-FM), and supported by BattlefordsNOW, this year’s event raised $127,496. The Radiothon took place remotely with a drive thru donation site set up in the CJNB parking lot.

The On Air for Healthcare Radiothon is seeing lots of community support, with people making donations at the drive-through remote site at the station this year. pic.twitter.com/NvA2epVdsL