Netflix co-CEO and Chief Content Officer Ted Sarandos has revealed that the streaming giant will start production on its first Original Canadian feature film later this year and is sponsoring a national rollout of Women in Animation Vancouver’s Animation Career EXCELerator (ACE), as it ramps up activity in Canada. 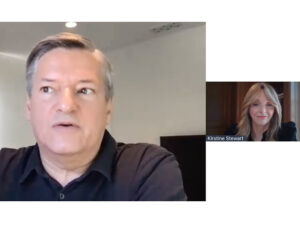 Featured on the opening day of the BANFF World Media Festival, in conversation with Kirstine Stewart, the Head of Shaping the Future of Media at the World Economic Forum, Sarandos talked about lessons learned from the pandemic and the streamer’s plans as it establishes a Canadian headquarters in Toronto after 10 years of doing business on this side of the border.

As the streamer faces increased regulation in Canada, Sarandos asserted that it’s making a concerted effort in the 190 countries it’s doing business in to be a meaningful investment partner.

“We’ve really made it a point to come in and be a partner in each of these countries that we operate in and put really meaningful investment into the marketplace and not just export Hollywood to the world, but to actually export content and local stories to everywhere else in the world…that’s been true of Canada, that’s been true of Spain, Argentina and certainly France,” said Sarandos. “Canada’s a great place to produce. Just since 2017, we’re 2.5B CDN invested in Canadian production for the world, great shooting locations, incredible crews, great post production, great video effects, it’s phenomenal what you can do in Canada and we want to be even more aggressive about telling more Canadian stories as well.”

As far as production priorities going forward in Canada, Sarandos said the streamer is “looking for everything.”

“Unlike a lot of networks with a narrow focus, we are looking for the best version of everything. We’re looking at best in class from documentary to scripted to dramas to comedies to films to series. We’re looking for that story that you’re dying to tell and no one can tell it as well as you.”

Sarandos also touched on how the pandemic has shifted the attitude toward non-English language viewing – which has grown 50% over the last year – with subtitles no longer considered a barrier for the U.S. market with the commercial success of films like Roma and Parasite.

“In North America, we’ve had an embarrassment of riches of local language content. You didn’t have to explore much and I think now during the pandemic when people had a lot more time on their hands and were denied the ability to travel, they were more interested to see things from around the world,” said Sarandos.

Sarandos admitted that last March was “a shock to the system” with no protocols in place to accommodate necessities like dubbing in countries like Italy and Brazil. He also acknowledged that the company could have had early foresight into what was happening, had they listened better to some of their international teams.

“You’ve got to listen. This impact, we started hearing it from our employees in Korea and Japan and Southeast Asia weeks before we were experiencing it here and it was very abstract what people were describing about life at home and the pressure and the fear,” said Sarandos. “So for me, a lesson was you really have to listen. The best way that people can do the best work of their lives is to make sure they’re comfortable and they’re safe. Had we listened a bit more to our own employees, we would have seen what was coming better.”

Sarandos said some COVID-19 protocols will be rolled into production norms, with the company experimenting with work from home days moving forward, but he believes creative work is ultimately better when it’s collaborative.

“The ability to collaborate, the ability to offer feedback in real time or reading body language, you can be a much more effective communicator in the room. We just have to find the right balance…remember, we’re in the very early stages of video conferencing. This was kind of put together for emergency purposes, but I think it will continue to get better and better and will replace some travel,” said Sarandos. “Writers rooms, you can write a script via video conferencing and Zoom, but it’s very hard to replace the ability to hear the laughter of folks at the table to hear if the joke worked.”

Sarandos concluded the discussion by addressing what many Canadian fans saw as the premature conclusion of CBC-Netflix co-production Anne With An E. He’s hopeful some of that disappointment will be appeased by the news that Irish-Canadian actress Amy Beth McNulty will be joining the cast of Netflix sci-fi hit Stranger Things.