Netflix has announced plans to open a Canadian office and hire a dedicated content executive to work directly with the Canadian creative community, as the streaming giant faces looming regulation.

Ted Sarandos, Netflix co-CEO and Chief Content Officer, revealed the company’s intentions in a blog post published Wednesday. Sarandos indicated Netflix is looking to build on the momentum of successful Canadian productions like Anne with an E, Jusqu’au déclin, and reality competition series, Blown Away.

“Canada is an amazingly diverse country and growing our presence locally will help us share more authentically Canadian stories with the world, whether through the development of original content or through co-production and licensing opportunities,” wrote Sarandos. “As always, the goal is to give our members great choice and control over what they watch.”

In the post, Sarandos also touts Netflix $2.5B production spend in Canada since 2017 and its ongoing career development partnerships benefitting “more than 600 Canadian creators to-date.” He said in the weeks ahead, the streamer would be announcing “even more exciting news around local projects and relationships.”

Netflix Canadian office would be in addition to its Toronto production hub, established in 2019, that encompasses four Cinespace sound stages and another 84,580 sq. ft. at Pinewood Studios. It also leases B.C’s Martini Film Studios.

Headquartered in Los Gatos, CA, the digital giant currently has 14 offices in 10 countries, including the UK, Germany, France, Spain, the Netherlands, Mexico, Philippines, Singapore, and Taiwan Province in China.

The Netflix announcement comes as foreign-based digital services operating in Canada face regulation, starting with having to charge GST/HST, beginning July 1, which according to a new report from the parliamentary budget office could put as much as $1.3B in federal coffers over five years. A proposed corporate level tax on companies like Netflix, Amazon and Spotify would take effect in 2022.

Bill C-10, which is currently being debated, also looks to impose Canadian content obligations on streaming services. Netflix previously committed in 2017 to invest $500 million in Canadian production over five years.

“There’s always been a trickle of talent back and forth between, particularly English Canada and Hollywood, but in recent years as the players operating in our space get bigger and bigger, the vortex has ironically become even more powerful, draining more of that talent and creating challenges to retain creative talent in Canada,” Mastin told Guilbeault.

Guilbeault said stemming that talent drain is one of the goals trying to be achieved with Bill C-10.

“On the one hand, giving the Canadian cultural sector more resources to do what they do is certainly one way to ensure we’ll keep more of our talents here, but also forcing the platforms to invest in Canadian stories like traditional broadcasters do will be another way to ensure that we can do that,” replied Guilbeault. “Obviously people may choose to work here or go and work in the U.S. and we can’t stop this, but if we have this robust system in place, then chances are we will keep a lot of our talents here and continue doing the amazing things that we do…for which clearly there is a global appeal for as we’ve seen with many of our series in English or French Canada.” 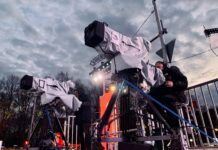