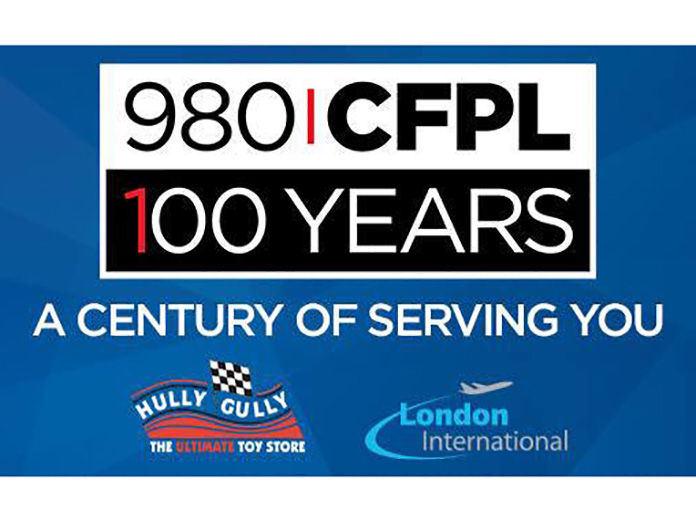 980 CFPL will celebrate its centennial anniversary on Friday, Sept. 30 at the London Knight’s home opener, in addition to special on-air segments throughout the week.

CFPL’s forerunner CJGC-AM was conceived in 1922 when Arthur Blackburn, owner of the London Free Press Printing Co., was granted one of the first radio licences in Canada. The station began broadcasting from studios in the Free Press building at 440 Richmond Street.

Unhappy with the growth of radio, Blackburn struck a deal in 1932 to merge CJGC-AM with Windsor’s CKOK-AM resulting in the birth of CKLW-AM which was to serve both the London and Windsor markets. The merger between CJGC and CKOK enraged London residents and businessmen, forcing the Blackburns to withdraw from their partnership and open new London station, CFPL-AM. Corus Entertainment acquired CFPL-AM from Blackburn Radio in 1999.

This week, the station is airing several radio specials in celebration of 980 CFPL’s 100th birthday. Hosts Devon Peacock and Mike Stubb will broadcast a special segment highlighting some of the city’s most talked about and well known stories of the past during their shows from 6 a.m. to 9 a.m. and 3 p.m. to 7 p.m., respectively. On Friday, listeners can tune in from 4 p.m. to 7 p.m. to hear from some of the station’s former hosts.

980 CFPL has also partnered with the London Knights, London International Airport, Hully Gully Toy Store, and the Children’s Hospital at London Health Sciences Centre to celebrate its milestone at the London Knight’s home opener on Friday. The evening will act as a fundraiser for the Children’s Hospital Indigenous Youth Wellness Program, in support of the National Day of Truth and Reconciliation. Attendees will also have a chance to win a pair of tickets to travel to Tucson, Arizona.

“980 CFPL has seen an incredible amount of talent come through the station over the last century,” said Trudy Kitchen, 980 CFPL Program Director. “We continue to lead the charge with a dedicated, creative and hardworking team of hosts, news anchors, reporters, producers and technical operators. I’d like to thank everyone who has played a role in the station’s success over the years, and to our listeners who we wouldn’t be here without. As we celebrate this milestone and look toward the future, I am excited for what’s to come.”