CityNews has announced that Lisa LaFlamme will help anchor its coverage of the passing of Queen Elizabeth II, as a special correspondent. 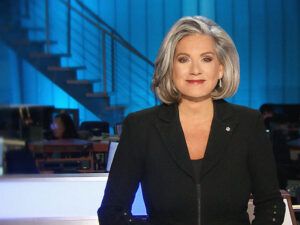 LaFlamme, 58, joins Rogers Sports & Media just four weeks after the announcement of her departure from CTV National News where she’d been Chief Anchor and Senior Editor since 2011 and with CTV for 35 years. The premature termination of the veteran journalist’s contract has continued to make headlines ever since with a petition calling for her reinstatement collecting over 200,000 signatures.

Acting as a special correspondent to CityNews, Rogers says LaFlamme will head to London to lead the network’s coverage, providing daily reporting for newscasts across television and radio as well as making regular appearances on Breakfast Television.

“The Queen is the only monarch most of us have ever known. We grew up with Her Majesty and mourn the passing of this remarkable and inspiring woman,” said LaFlamme, in a release. “As this second Elizabethan era comes to an end, I can only say how truly honoured I am to help tell the story of her life and the legacy she leaves.”

“Over her 70-year reign, Queen Elizabeth II left an indelible legacy both here in Canada and around the world and the news of her death is felt far and wide as so many mourn this loss,” added Colette Watson, President, Rogers Sports and Media. “News coverage of such a pivotal moment in history is integral to achieving our mission of keeping Canadians connected and informed, and Lisa LaFlamme’s incredible talent and wealth of experience are befitting of an event of this magnitude.”

CityNews’ multi-platform coverage of the legacy of Queen Elizabeth II will include national events and ceremonies, the transition to the reign of King Charles III, in addition to live coverage of the Queen’s funeral.