Former CFNY personality Brad McNally, who had a four-decade career in radio spanning three continents, passed away Saturday after a five-and-a-half-year battle with brain cancer.

Born in Canada, but also raised in Australia and the UK, McNally started his on-air career at 4SB in Australia in 1972, in spite of his Canadian accent.

He returned to Toronto in the late 1970s and worked around Ontario, including CFOR Orillia, before hearing CFNY and knowing that’s where he wanted to be. He joined the station, then located in Brampton, ON, in 1979.

Following his brain tumour diagnosis in 2016, McNally returned to Perth to focus on his health. Over the past few years, he’d also been part of the weekly schedule on David Marsden and Igor Loukine’s Toronto-based alt online station NYTheSpirit.com. 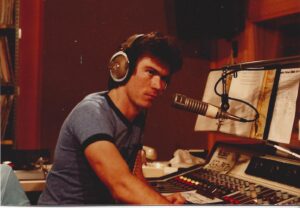 “Great stories were told and much happiness,” wrote Marsden in a weekend blog post announcing McNally’s passing. “That event was recorded and sent to Brad’s wife. During the past few weeks Brad has been watching that recording of the event. From that video Brad knew how much he was loved and respected by both those of us who worked with him and the many fans who grew up listening to him.”

Part of McNally’s legacy at CFNY was co-writing “Workin’ On The Radio,” a song the station recorded and aired in response to a bid by the CRTC to revoke CFNY’s broadcast licence, in favour of another format, after its owners declared bankruptcy. The station pressed 3,000 copies of the tune, which sold out within weeks. Among the musicians involved in the session were rock guitarist Domenic Troiano and members of Teenage Head.

In a 2016 “exit interview” with Australia’s Radio Today, McNally cited the experience as one of the craziest radio promotions he’d been involved with.