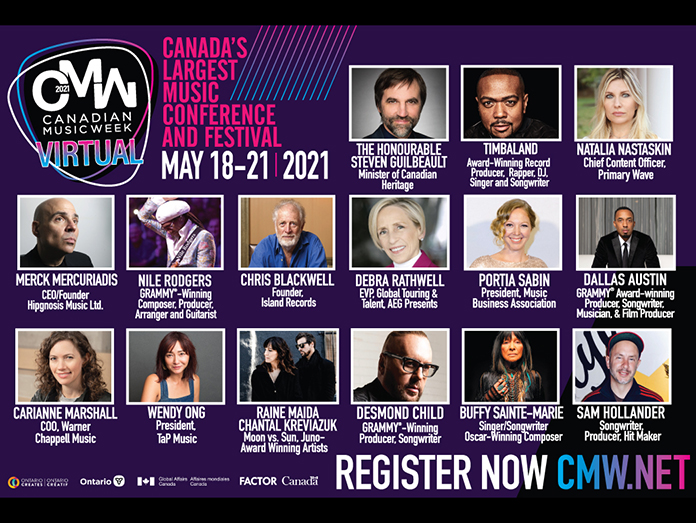 Buffy Sainte-Marie, Nile Rodgers and Timbaland are among those set to take part in the upcoming 2021 Canadian Music Week (CMW) Virtual Conference & Festival.

After a hiatus in 2020 due to COVID-19, CMW will return May 18-21. The initial list of speakers for this year’s music industry conference includes:

The virtual event will feature networking sessions, breakout rooms, exhibitors, and an international marketplace, in addition to speakers and panelists. Registration is now open.

The 20th Anniversary Independent Music Awards will be streamed live from the El Mocambo on Friday, May 21, hosted by Matt, Carlin and Josie Dye of Toronto’s Indie88 (CIND-FM). The evening will feature performances by 2019 Indie Award-winners Monowhales, July Talk, Sam Roberts Band, Walk Off The Earth, and CZN, the winners of the 2020 Jim Beam National Talent Search.

The Canadian Music Week Festival will be free to the public this year, featuring both Canadian and international artists. It will stream on the CMW Festival website from May 18-21 and be available to view on-demand.