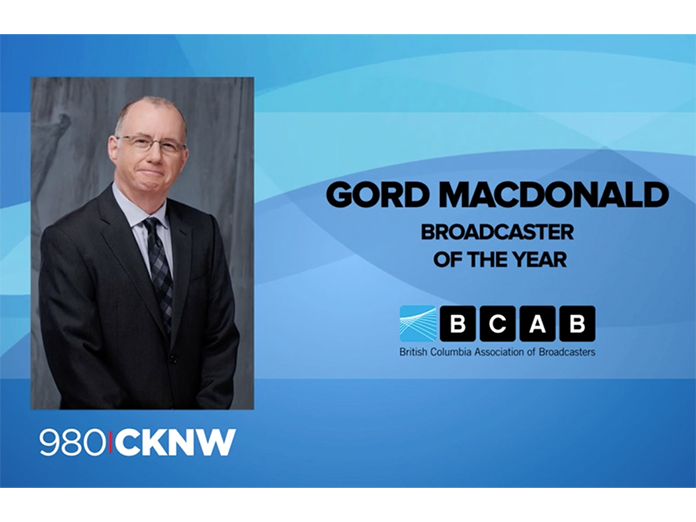 The B.C. Association of Broadcasters (BCAB) has announced its 2022 Awards of Excellence with retired CKNW anchor Gord Macdonald named Broadcaster of the Year.

Macdonald hung up his headphones in September after 33 years with the Vancouver news/talk station and 47 years in radio news. His resume included stops at CKDA Victoria, CJOY Guelph, CKLQ Brandon, and CJAT Trail, BC, before teaching broadcast journalism at BCIT, including two years as Program Head. He began working at CKNW in 1989 and took over as News Director from the legendary Warren Barker in 1991.

Andeen Pitt of Wasserman + Partners Advertising in Vancouver was awarded the Friend of the Industry Award.

In the Best Commercial Creative – Radio category (Large Market), Corus Entertainment’s CFOX and CKNW were recognized for “Harbour Air – Back to Business” and “Accent Inns – Give A Duck.” In the Small/Medium Market category, Vista Radio’s 94.3 The Goat (CIRX-FM) and Country 97 FM (CJCH-FM) Prince George won for Total Tops Kitchen and Bath – “Time to Reno.”

“The BCAB has been awarding excellence in all facets of broadcasting for decades,” said President Rob Germain. “We recognize performers, creatives, industry leaders, and community service for radio and TV in small, medium and large markets in BC.”

Germain said BCAB is in the midst of planning its 73rd BCAB Conference, a one-day event to be held May 4 at the River Rock Casino Resort in Richmond, BC. The event will be the association’s first in-person gathering since its 2019 conference in Victoria.