Many Chinese-Canadians are familiar with the name Fairchild Television. A media powerhouse that serves the Chinese community across Canada, this household name has been bringing a wide variety of programming to viewers for more than two decades.

For more than 30 years, Steve So has worked in the media scene in both Hong Kong and Toronto. For a third of that time, he’s been with Fairchild Television as the producer of Media Focus. Never once did he imagine he would win an award for his work. 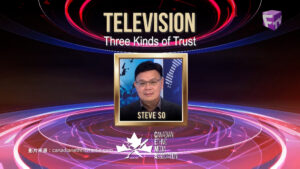 “I’m very fortunate [in my role] to be able to delve into different issues that happen in the past or are happening now around the world, and interview different kinds of people and tell their stories,” said So, who added that the win still feels like a dream, smiling as he recounted the moment of disbelief and shock when he heard his name announced.

His now-award winning investigative report focused on a research project done at York University during the ongoing pandemic looking what areas citizens hold their trust in. Appropriately titled “3 Kinds Of Trust (Under A Pandemic)”, So’s report beat out over 60 submissions across the nation to secure a win in the Television category.

“3 Kinds Of Trust (Under A Pandemic)” Synopsis

Professor Cary Wu, from York University’s Department of Sociology conducted a research project during the pandemic to see what areas citizens held their trust in. Wu’s research focused on three types of trust: the first being the trust between people, the second being the trust between people and an organization (such as government, medical institutions, and the media), and the third being the trust between races. As the ongoing COVID-19 pandemic continued its vice grip on the world, Wu found that the impact proved detrimental on people of Asian descent. Anti-Asian sentiment and racial attacks were on the rise, with the mental health of those living in those communities in steep decline. A key finding of the research project was related attacks on people of Asian descent and the stigmatization of China. Because of the rapid and sudden spread of this virus, many Asians living in Canada and the United States were subject to racial slurs and name-calling, leaving many to live in fear that they could potentially be attacked simply because of the way they look.

Covering a topic that’s affected the Chinese-Canadian community heavily for the past two years, So is incredibly grateful to shed light on a side of the pandemic that many may not see. 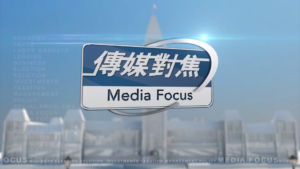 “The pandemic has affected all of us, not just people in the Chinese community or of Asian descent,” he said. “I’m sure a lot of us during this pandemic have been subject to racism, or had that feeling of loneliness, especially with social distancing.”

He hopes that different communities of colour across Canada don’t feel alone in this fight.

“The distance between people has been gradually getting larger, and the trust they once held in one another has been diminishing.”

If there’s one takeaway from So’s report, he hopes that it’s for communities to continue to work together to combat the unfair hatred directed toward innocent bystanders.

“We live in an inclusive community,” he said. “Even though we are of different ethnic origins, we must seek our common grounds and respect each other to facilitate a harmonious society.”

Since it’s conception in 1993, Fairchild Television has grown to become the staple television channel for Cantonese-speaking Canadians and a national powerhouse that showcases the biggest and best in their programming lineups (including our locally produced daily newscast, many popular drama series’ that are broadcasted same-day as in Hong Kong TVB, sitcoms, and current affair programming, sports, lifestyle shows and more).

With emerging cultures and the establishment of bold and innovative communication methods in the community, what was formerly then-known as the Canadian Ethnic Journalists and Writer’s Club (CEJWC) was a constant voice and advocate for new immigrants seeking to communicate in their mother tongue. With the development of new technology and the continuing diversification of the journalism field, CEJWC evolved into the Canadian Ethnic Media Association (CEMA) which gradually became the platform to heart-it-first and recognize the fruits of everyone’s labour.