Murphy, 61, is stepping aside from his day-to-day role with the bureau, but will continue to contribute commentary and feature stories to the station. The 45-year broadcaster started his career in 1977 at CFBC Saint John, NB and went on to host of “The Hotline” on CJCH Halifax, before moving into television in the early 1980s. He was the principal host of Live at Five for seven years before assuming his current role in 1993. This year marked Murphy’s 28th as anchor of CTV News at Six and his 35th anchoring a supper-hour broadcast on CTV. 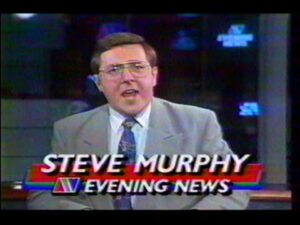 Directly following the broadcast, the station is airing half-hour special, Live & Local: A Tribute to Steve Murphy, at 7 p.m. AT on CTV Atlantic, and CTVNews.ca and the CTV News app, which will feature highlights of Murphy’s work over more than four decades on-air, along with reflections from former colleagues, perspectives from the charities Murphy has supported, and messages from viewers across the Maritimes.

“This special broadcast gives viewers an intimate and nostalgic look at Steve’s unparalleled career,” said Dan Appleby, News Director, CTV News Atlantic, in a release. “The program is a celebration of his life’s work and the significant impact he has made on the Maritimes.”

“Steve Murphy has been a constant in the lives of so many Maritimers,” added Trent McGrath, General Manager, CTV Atlantic. “For decades, we‘ve turned to him to make sense of the news of the day, and in celebrating his final broadcast as Chief Anchor, it’s our turn to show Steve what an impact he’s had on us all.”

Among the charities Murphy has supported over the years are the United Way’s Halifax Campaign. He also chaired the Christmas Daddies Fundraising Association for 15 years and has hosted the annual “Christmas Daddies” broadcast for over 30, in addition to the IWK Telethon for Children.

Murphy was awarded the RTDNA Lifetime Achievement Award in 2012. He was recognized with the Eldred Savoie Award for Excellence and Dedication in Journalism, as chosen by the New Brunswick Legislative Press Gallery, in 2013.