Cogeco is celebrating 20 years of news on YourTV North Bay this month.

Launched in 2002 to fill the void of local television news in North Bay, Cogeco News’ first broadcast was at 6 p.m. on Monday, Jan. 14, 2002. Over the past 20 years, the program has aired over 5,200 episodes, Monday to Friday, showcasing what’s happening in North Bay, in addition to hosting numerous local and national celebrities in-studio from entertainers and athletes to Prime Ministers Stephen Harper and Justin Trudeau. 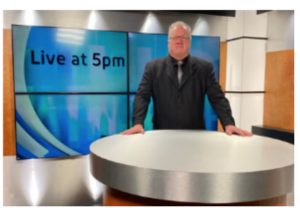 “What started out as a six-month experiment in 2002 has evolved into 20 years of providing North Bay and Callander up-to-the-minute truly local News and Sports coverage” said host Greg Estabrooks. “It’s been an honour to be here since day one. Cogeco has given all of us here the chance to bring so many people and stories to light. A news operation like no other.”

Founded by Cogeco Regional Manager Brian Winkworth, Clarke Heipel is the show’s producer with Estabrooks serving as host since its inception.

“We cover local news as well as community events, with numerous partners in North Bay and Callander. Clarke and Greg have covered tens of thousands of local stories that matter to our community throughout the past 20 years. The community trusts and relies on us to deliver news that matters to them and that’s evident in the fact that Cogeco News continues to be our most watched program” added Joey Roussy, Programming and Community Relations Manager, North Bay.